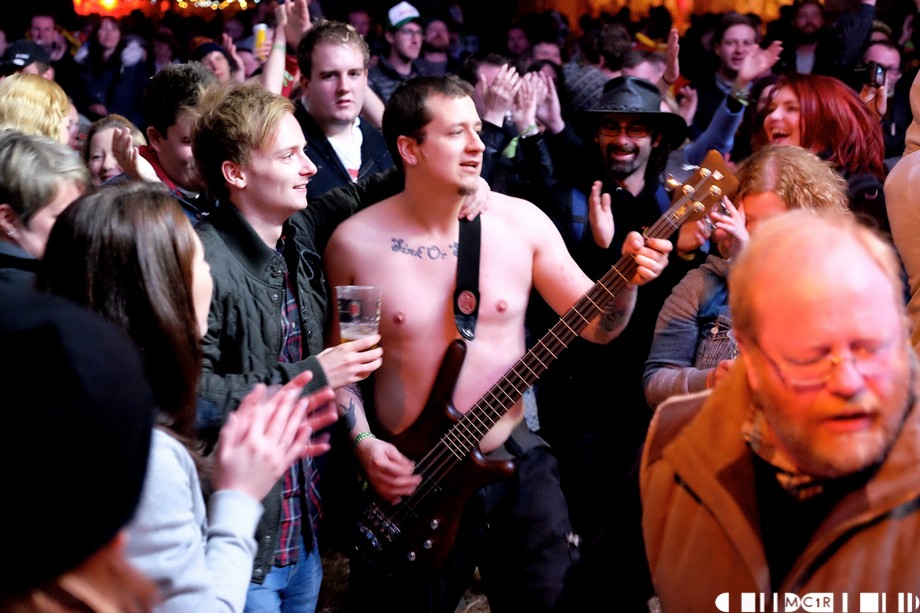 This is the festival which signals an end to the summer in the Inverness area. As such there is an end of term feel with a crowd who although appreciate the music take some time to warm to the acts. This is not to say that there is a lack of enjoyment but more that the focus can be on the splendid array of beers on offer, and who can blame them.

Every year there is a theme, this year it was nature, but the range of fancy dress does not always resonate with the theme but again, this is Jocktober and it likes to be that little bit different.

I arrived late afternoon and only caught the last of the familiar roar of Silver Coast, as I was entering, who were making amends for illness delaying their set by a year.

A moment to catch up with my ?reliable stand-in who noted that Searching for Donkeys had been reunited with “those” frisbees (that had littered their set and most of Belladrum 14) made a return. Like the frisbees Searching for Donkeys are perfect festival fodder, with the sun shining , the barn being shown to it’s best. Ok a dedication to one of the IGigs team may have fallen on deaf ears, much to his shame, but Kitty’s Favour went down well regardless.

I had also missed Woodentooth who had marked their third festival appearance in four weeks, with a strong set with Daylight opening proceedings. The track certainly led the charge for an attentive and loyal audience.

Next up were a real stage filler in the RMT Big Band. I didn’t count them but as they are a big band they did fill the stage, it goes without saying. Producing some fine arrangements they lacked connection with the audience, in part due to the slow burning nature of the festival and probably the lack of any lead coming from the stage. It did though provide splendid wallpaper to the ongoing drinking.

Next up were The Side, there’s an old school laddish feel to The Side. It’s upbeat and in your face and for original material it is very familiar to even the first time listener. In fact give led singer Winnie a ‘dara dara’ or a ‘woo woo woohoo’ and I’m sure he’ll turn it into an instantly infectious song. In fact by the end of their set this fab four were beginning to have shades of the early Beatles.

Over on the more intimate acoustic stage Josephine Sillars was ready to start up. Minus her ubiquitous ironing board keyboard stand Josephine was still, well, Josephine. Establishing herself in Glasgow, Josephine has grown in character, not that she was short in that department, and completed a set of urban soulfulness, even adding in a cover of Massive Attack’s ‘Teardrop’.

Her connection with an audience makes her so likeable, she can add power when needed but equally subtlety as in ‘Little Footsteps’ She’s no one trick pony as set ender ‘Hurricanes’ had a real Nina Simone feel. A busy summer well rounded off.

The hard edges of The Broken Ravens caught some attention. Rock as hard as this can be a little too much at even as an eclectic festival as this, but it turned out to be hard rock for the masses, or at least the Jocktober crowd, as they really brought it to their audience. It is always dangerous, or even worrying, when frontman Toby Michaels is given a wireless mic.

Although contained well within the band, the stage though is too small a place to hold him. Toby took advantage of the hay in front of him to mess about with just about every kid that wanted to turn him into rocks version of Worzel Gummidge. There is though a serious side to Toby and although he likes to crowd please he really does hold his own in this line up.

One thing that did catch me out this year was the queues for food. I missed Pronto Mama’s set when waiting for my Woodburn’s pizza, and well worth waiting for it was. I can’t live on beer alone, and I can’t say I haven’t tried, but it was slightly ironic that the set that I missed was of a band whose name was like a mash up of a couple of fast food chains.

Their neighbour’s had to close up early having had to get more supplies in on Saturday morning. A couple more next year might not go amiss.

I did though catch Spring Break. Spring Break have been the band to capture the public’s imagination this year. Normally a three piece they appear to be turning into something of a collective with the addition of Ashley Mackay beefing up the vocals and Dorris Kissee Kissee doing what Dorriss Kissee Kissee does.

They can do no wrong at the moment and with Ross in fine form interacting with the audience. Whether punching euphemistic dolphins or fascinating about procrastination they really connect with an audience. Their naughty cover ‘Jumped Up Pricks’ and the ear worm that is “Tractor Tractor’ sealed it for them tonight.

A band to benefit from the darkening night, were Iain Maclaughlin and the Outsiders, less a case of ‘Falling through the Dark’ and more a case of doing what the band do best, embracing and thriving on the metaphorical and environmental darkness. Bare chested bassist Dave Ramsay enjoying every minute of it, making the occassional skirmish into the audience. Six songs, and clearly way too short for the audience, who called for more.

Woodenbox, from the well respected Olive Grove Records stable, took the reigns from the Outsiders and ran and ran. Genres apart but drawn together in their ability to scintillate a crowd. Whilst tracks from most recent Foreign Organ got an inevitable airing, we are suckers for their ‘Fistful of Fivers’ period that saw them release Home and the Wildhunt. The mask wearing guitarists made for a slightly surreal feel to proceedings, regardless file under ‘sublime’.

It was also noticeable that as it got darker the whole tone of the festival changed. There was much more focus on the music and the barn began to really get packed. The darkness enveloped the site and with the addition of the smoking log fires the atmosphere developed a certain relaxed charm.

That calmness contrasted with the onstage performances. It was all quite beguiling. Or maybe that was just the added effect of the excellent beer. It all did get a bit surreal, aided by two more eccentric acts in The Amphetameanies and  Colonel Mustard & The Dijon 5. I’m sure I saw someone on stage with a glitter ball head. Or maybe that was the beer too. Whatever it was it was time for me to say farewell to the 2015 festival season.

Festivals are great weekends of escapism and togetherness, and this year, more than most, they were more than appreciated by me.

Check out the photos from the second day.