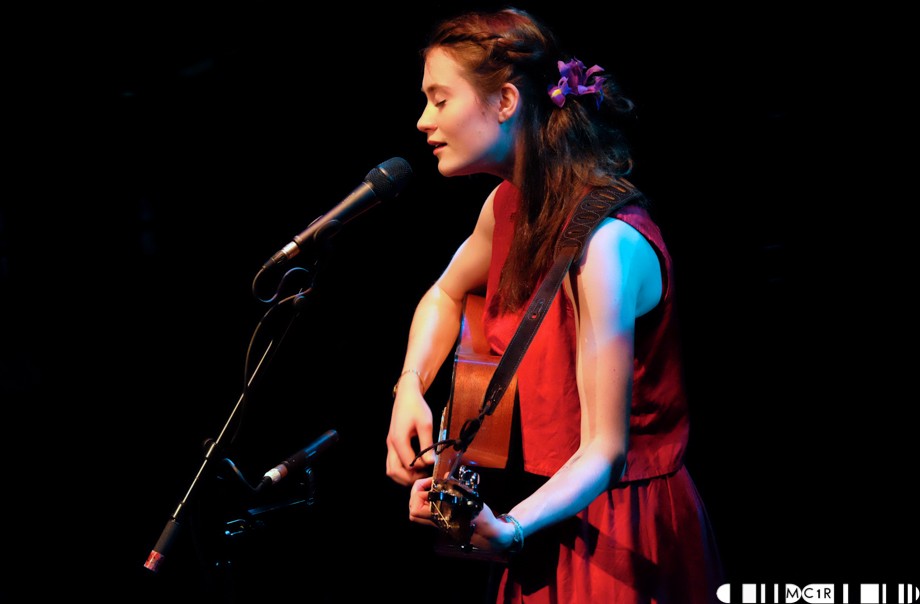 Rachel Sermanni with support from Tom Terrell at the One Touch Theatre on Monday 5th October. A review.

I suspect Tom Terrell is not someone who is going to make much of a fuss about anything. A quiet relaxed presence on stage, you have the sense he is happy to let the songs and music do the talking. And it works just fine. He has quite a CV having been given credit for much of the award winning success of Canadian roots oriented group The Modern Grass. A singer songwriter, producer and multi-instrumentalist; tonight he shares offerings from his first solo, eponymous, album.

Tom Terrell brings contemporary sensibilities to a set that draws on folk, roots and a hint of jazz influences. With looping tech he lays down some big ambient soundscapes although it is slightly jarring when this stops sometimes suddenly and we are in to stripped back one man and a guitar (with occasional harmonica). From opener The River right through to his last (new and as yet un-named) in a six-song set he is a captivating presence on stage: a fine alt-country/americana rich voice and some great picking patterns on the guitar. There feels like a lot of time and space in his set and it rolls at a nice pace through that folk, roots, blues and Appalachian inspired material. Not so very long ago Rachel Sermanni introduced us to Mo Kenney, another Canadian, I’m looking forward to seeing who she brings back next time.

Tom was joined on stage by Rachel for his last couple of songs and of course, the favour is returned. What starts as a solo set builds with the addition of Jennifer Austin on (the 100 year old) piano for ‘Wine Sweet Wine’ before the set grows in intensity with Tom Terrell returning to the stage (guitar and drums) accompanied by Gordon Skene on bass for a huge performance of the ‘The Fog’. This evening is of course about showcasing the new album ‘Tied to the Moon’. But alongside The Fog, ‘Marshmallow Unicorn’ and ‘Song to a Fox’ from the previous album ‘Under Mountains’ also make a welcome appearance.

The songs from the first album don’t sound the least bit out of place sharing the space with the new material. But on the new album itself it is fair to say that something of a shift has occurred. Much has been made of a change in the character of this latest release and of course Rachel did appear earlier in the year at the Gentlemen of the Road event with (pause for effect) an electric guitar: we are encouraged to believe that her particular brand of folk noir just got a shade darker. (I’m not even sure I agree with that particular label, and besides there is a band called Folk Noir).

I don’t hear it as a change in direction so much as another layer to what Rachel does. For example, it seems she is still finding new qualities to her voice, and that, is as much as any other element in the songs, responsible for that sense of a change in tone. That and an overall sound with a bit more depth and heft and a shady intensity about it: there is a loose grungy edge here and there. I’m desperate to avoid going influence fishing, but, when I say grungy I am of course not talking about Nirvana, more like the Lanois inspired sound Emmylou Harris delivered on Wrecking Ball. Overall, there is a more atmospheric and cinematic feel to the songs.

There is a traditional pulse beating at the heart of this very contemporary set, of course there is. But this, is, Rachel Sermanni. For me that means artful, literary and evocative lyrics from a truly fine storyteller, and this sets her apart from most of her contemporaries. She offers thought provoking observations and a capacity to think herself into another life, quite often with a surreal twist here and there. And doesn’t everyone enjoy a good story well told?

The sound at the One Touch Theatre was as always exceptional (thanks were duly paid to Jimmy) and I’m certain everything sounded exactly as it was meant to. But, while I get that the drums have to be loose and thundery during the more intense grungy bits I just thought Tom hit them too damned hard, some subtlety would have been preferable. He did however shine on some exceptional harmonies and his rendering of the Colin Macleod part on ‘Banks Are Broken’ was flawless. It was great to hear ‘Tractor Song’ in the flesh and I had to put the camera down during ‘Old Lady’s Lament’. Beyond that, I’m hoping her encore rendition of ‘A Thing Called Love’ is still in the set next time I see her.

Quality sound apart, The One Touch Theatre stands out for a few reasons. People really engage with the performance and listen, there is no background chatter, and I’m always so glad that I don’t have to face the spectre of viewing an act through a forest of tiny illuminated screens. All of which adds to the theatre of a performance and increases the possibility that an audience will have of a truly shared experience.

Photos of the gig can be found here.