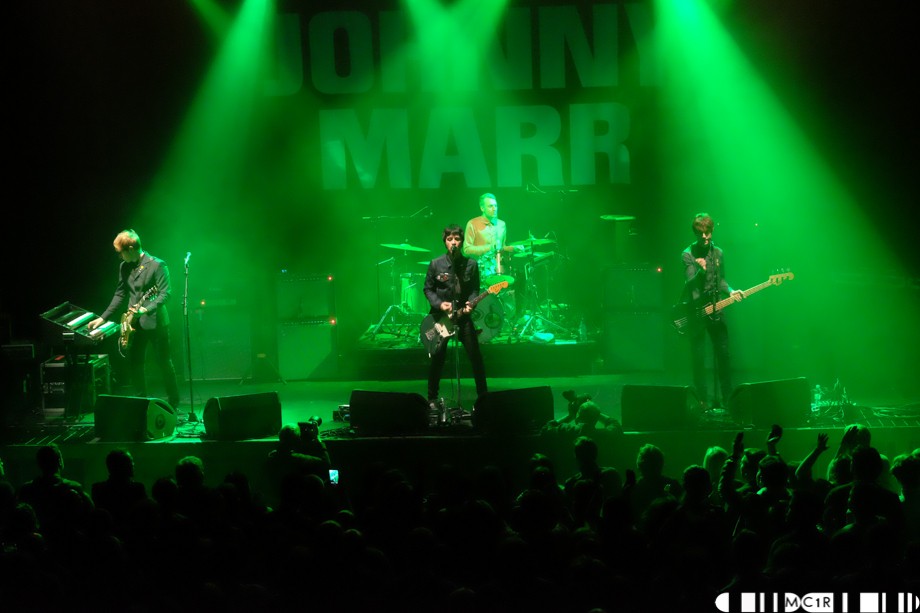 Support band Man Made are still relatively new on the block but they’re already familiar with the Highlands having played at Loopallu last month. Frontman Niall Marr commenting that when they talked about ‘The North’ they always had Manchester in mind, never really fully comprehending that there is still at least another nine hours of ‘North’ left to go. The surname isn’t a coincidence and that is Johnny Marr’s son up on stage.

While it’s likely a bit of paternal nepotism has played a part in getting them the support slot it’s not without merit. Dressed in a spangly jacket to go along with his jangly guitar, Marr junior’s Man Made seem to be following in the path of bands like Speedy Ortiz in raiding that early nineties indie feel. They do so without feeling at all contrived and reminded me of bands like the Long Pigs and Throwing Muses in the days before Britpop rendered the whole thing into a stale commercialised wasteland.

Niall has clearly inherited something of his dad’s ear for a good hook and the band deliver a short but impressive set. They have a few technical issues before final song and single ‘TV Broke My Brain’, but any banter from the crowd is met with good grace and a wry smile.

And on to Johnny Marr, there’s not much to say here that hasn’t already been said before. The Smiths are always looming in the background and justifiably so if you look at the bands they went on to inspire. But, unlike very many of his contemporaries who have become bloated shadows of themselves, churning out album after album of dross; Marr has continued to produce very high quality music. His work with The The and Modest Mouse are peerless and his two recent solo albums surprised some of the more cynical critics in the press by being very good indeed.

Fans tonight were never going to get a show by a man going through the motions, in fact it’s easy to forget that the bloke up there on stage gyrating with the best of ‘em has been playing music since the early eighties.

He’s happy to give the old back catalogue a dust off and anyone hoping for the odd Smiths song to get an airing were delighted to hear ‘Panic’ two songs in. Marr actually does a very good job singing the songs, managing to get some of Morrissey’s inflections in and not sounding entirely dissimilar to the man himself. ‘There is a Light That Never Goes Out’ gets the singalong treatment and Electronic’s ‘Getting Away With It’ sounds sublime, the extended Marr-style jangly guitar solo getting dangerously near to showboating but managing to stay the right side of entrancing. Throw in some trippy lighting, delirious fans and you have a near religious experience on your hands.

It’s not all one-way traffic with the love-in though. Marr had the spent the last couple of days exploring the environs of Inverness, delighting Nigel at Union Vinyl with a visit and getting a feel for a city that he has decided doesn’t need to “pump itself up too much and I think that’s pretty cool…. I think I might move here”. You get the feeling that he’d be more than welcome too.

The solo albums get a fair shot too and, as you’d probably expect, sit comfortably with the older material. ‘Generate Generate’ and ‘Back in the Box’ are slick and punchy and add to the momentum of a set that was quickly becoming an Ironworks Classic.

On a personal note, ‘How Soon is Now’ is a song that I have utterly adored over the years, despite a spray of decent cover versions, none have ever matched the majesty of the original. ‘I am the Son, I am the heir, of a shyness that is criminally vulgar’ resonated with me in my awkward teen years (and my awkward adult years!) and I’m sure like many others I felt that at least someone else out there could relate to how I felt. I’d heard that this was likely to be in the encore and I along with a few hundred others were not left disappointed. It was to be the final song of the night and was a suitably bombastic end to an evening with Johnny Fuckin’ Marr.

Photos from the night can be seen here.