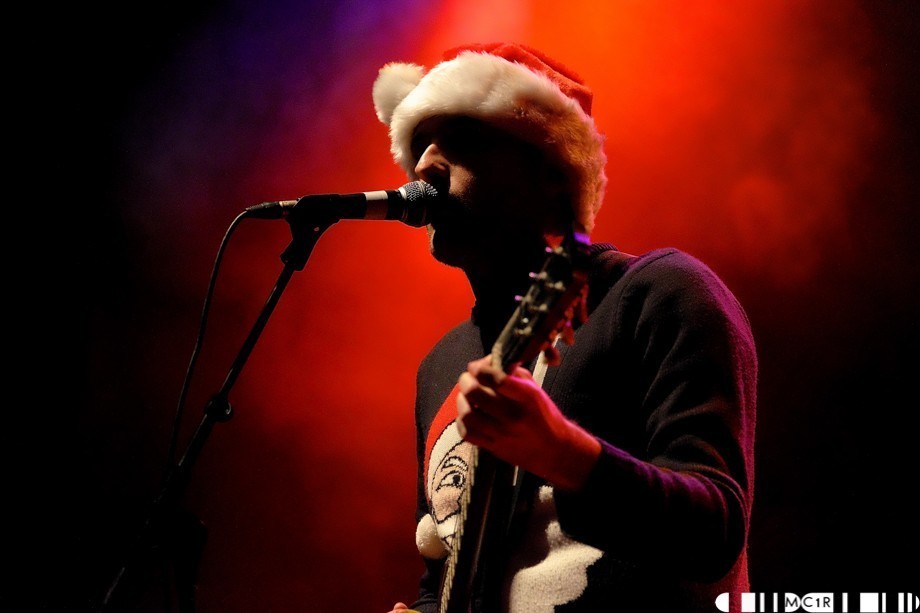 The last event of the year at the Ironworks for the Netsounds team and they upped the ante considerably. Seven bands were challenged to deliver cover versions only and guest DJ’s Nicola McAlley and Margaret Chrystall were given a brief to deliver their cheesiest tunes. My confession: I quite liked a lot of the tunes – I even danced with Houdi to Rick Astley.

See photos of the night.

What struck me most was that there was something about doing these covers that revealed something of the bands’ true nature – they really took some unexpected tunes and made them their own. Little Mill of Happiness managed to render ‘9 to 5’ into a dark sinister affair while Dr Wook wrestled the Whitney classic ‘I Wanna Dance With Somebody’ into a heartfelt lament.

Sarah Williamson opened and I was genuinely looking forward to her Britney cover of ‘Hit Me Baby One More Time’ – but it was the Christmas stocking full of sweets that I loved most, she can deliver a Snickers bar at a quite dangerous velocity. Garden of Elks consisted of Niall with full karaoke backing track going for it on the likes of Katy Perry’s ‘Firework’ and it turns out that there were a fair few in the hall who knew Belinda Carlisle well enough to sing along. I have my suspicions that Niall didn’t actually need the lyric sheets . . .

Sara Bills and The Hasbeens were on form again, applause to Colin for taking on the vocals on ‘Give a Little Respect’. A high energy set really brought the dance floor to life for possibly the biggest crowd of the evening. I didn’t stop smiling through the entire Be Like Pablo set, from the Rembrandt’s opener ‘Ill be there for you’ right through the likes of the ‘Shoop Shoop’ song and the ‘Hokey Cokey’ they were great.

I pleaded with Searching for Donkeys ahead of their appearance to play Little Donkey – I even offered to sing it if they learned the chords, nothing doing. I had to settle for a splendid cover of Seals ‘Crazy’ while Hue and Cry’s ‘Labour of Love’ drew a big response from the remaining dancers. Credit to all the bands and guest DJ’s for rising to the challenge, any turophobics were sent packing while a fair few guilty pleasures were revealed.

You have to admire the ambition, Netsounds almost succeeded in delivering their ‘boldest, brashest and biggest night of the year’. Alas the night had a familiar ‘showcase’ feel to it with the crowd ebbing and flowing depending on who was on stage: sampling the baby cheeses rather than committing to a full round of big cheese.

Maybe not one to roll out on a “Black” Friday, too much competition elsewhere? – but certainly worth going for again.