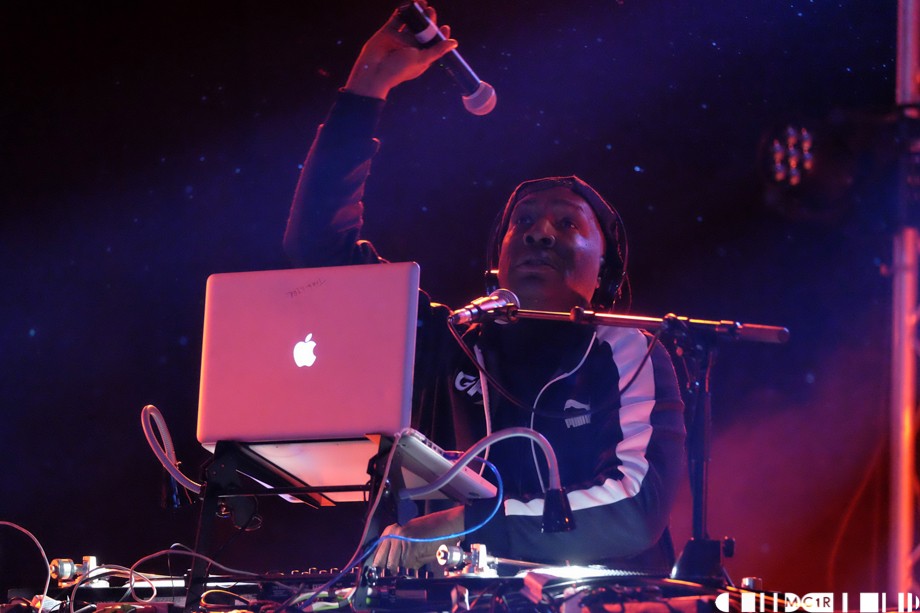 Day 2 of Groove Cairngorm and the Badaguish gates opened for more après ski fun with the majority of attenders having skied off last nights hangover during the day. For a winter festival the weather was surprisingly good, reaching a balmy 9 degrees in the afternoon. Honestly, I’ve been colder at Loopallu than I was at the top of the Cairngorms.

Skye hailing DJs Munroso & Ali McFly started things off but unfortunately, along with Inverness band Lional, played to next to no one. Lional jokingly told us that more people were present for their sound check which was a real shame because their set was fantastic as usual. The Indie Noir four piece played their 2015 single ‘Season of Salt’ as well as a new track Black Magic, although we hear a name change may occur after realising that Little Mix also have a song of the same name. I definitely prefer Lional to Little Mix.

Their forceful indie rock carried by the powerful vocals of Joshua Mackenzie always goes down a treat. Their Groove set included a fantastic cover of Bowie’s ‘Let’s Dance’. The band announced yesterday that they will be playing MUSEXPO in Los Angeles next month. An exciting venture for the band, and we wish them an enthusiastic and large crowd for this one.

Combining dance beats and traditional Gaighlig singing the audience at Groove Cairngorm were torn between wanting to jump or ceilidh dance.

The trad/dance scene has been dominated by Martyn Bennett since in beginnings. Since then most bands have tried and failed, until now that is. Niteworks, a band from Skye, are bringing the genre back and are doing so in style. With the release of their album ‘NW’ in October of last year the band have been touring and will continue to do so with prominent dates at the Tradfest in Edinburgh and the amazing festival ‘Skye Live’.

Combining dance beats and traditional Gaighlig singing the audience at Groove Cairngorm were torn between wanting to jump or ceilidh dance. Niteworks, led by Innes Strachan showed great skill in musical ability, swapping places on stage every song nearly. Their multi-instrumental talents included swapping between the synthesisers, pipes, drums and bass guitar. Featuring appearances from decorated singers such as Kathleen MacInnes and Donald MacDonald their performance encompassed the quality of the Scottish traditional music scene as well as abstracting it to fit with the modern electronic music scene. Having grown up listening to a lot of traditional music I feel like it is stuck in a rut of being sacred and something that cannot be tampered with.

Niteworks although sometimes abstracting the traditional sound seemed to appreciate it as a pure form too much on occasion. The difference between Niteworks and Martyn Bennett is that Bennett created traditional sounding tracks without even using traditional instruments at times. Niteworks take a more direct route to the idea of fusion by combining pure dance and pure trad in the same track. This method resonates with the audience incredibly well but for me lacks the depth of Bennett’s work. However, saying that this band are by far the most exciting thing in the trad scene and possibly in the whole Scottish music scene. I would 100% go and see this band again and recommend them to all those interested in not only a good night but the creativity that can be introduced to such a sacred form of music.

Writing this review has been hard. Niteworks were the best band to play at Groove in my opinion so being critical of them when I haven’t been of others seems unfair but it is only because I have this comparison to Martyn Bennett which would be like comparing a small local band to someone like The Beatles.

Charming synthpop trio Prides took to the stage in high spirits as the sun begun to set and it became apparent very quickly that singer Stewart Brock had been over indulging in the hot winter ciders available at the bar. The quality of the set definitely suffered as a result but anyone who has seen them knows what they are capable of as a live act. The band blend big synth sounds with powerful drumming huge sing along chorus’, which never fail to get the crowd going.

The band were joined by new drummer, Niall, on Saturday evening who appears to be replacing original member Lewis Gardiner. Niall did a tip-top job whilst things were a bit tipsy at the front. The crowd seemed to enjoy the set regardless and the band’s usual banter and frivolity carried the set through until dark.

Eton Messy commenced a string of Dj sets on the Saturday. Normally a three man team only one member took the stage at Groove Fest. Charlie Wedd got the party going in a similar way to Monki the day before. Members, Adam and Ed weren’t to be seen although I understand that Ed takes a more backseat role in terms of appearing on stage. Eton Messy are not only a Dj act but also have what seems to be a very successful music sharing platform which can be compared to that of Majestic Casual or alike.

If I’m being honest I am quite confused as to everything Eton Messy do but they also seem to be a ‘pioneering club brand’ with a tour which brings together prominent Djs. Putting all this to the side however, the appearance at Groove Cairngorm was one to remember. The well-constructed set laid out a perfect start to the evening as it took a slower more house orientated angle which contrasted the quick paced and intense Dj Yoda performance. Starting before darkness fell, Eton Messy did well to get a crowd arriving from the slopes directly involved in the music. To experience a great house night head along to one of their tour dates and be ready for an assured great night of music and partying.

DJ Yoda definitely used the turntable force to get the crowd worked up ahead of Grandmaster Flash, Yoda has made quite a name for himself, once being cited by Q magazine as one of the top 10 DJs to see before you die. There’s no point in me trying to pretend that I’m very well versed in terms of DJs, I am merely a padawan however I really enjoyed this hour and a half set.

strikes the perfect balance between originality and nostalgia

I felt like DJ Yoda really strikes the perfect balance between originality and nostalgia, enough to have you cheering when you hear an old familiar sample but also to keep you on your toes. It was definitely clear that this kind of act was what the crowd at Groove really wanted and Yoda did not disappoint.

Last but not least, the Grandmaster. What a way to finish the weekend! Having seen Grandmaster Flash at Belladrum in 2014, I was desperate to catch him again. His stage presence, interaction with the crowd and ability to pick exactly the track you want to hear next, are quite incomparable. As an audience member said ‘it’s like he plays every song you don’t know you know the words too.’ From Prince to Wild Cherry to Queen, it’s a brilliant and diverse mix. Having released The Grandmaster Collection in 2014, he basically has a ready made, party proof set ready to go.

Of course, this sort of talent does not come as a surprise, Grandmaster Flash is regularly hailed as one of the most important names in hip hop from the 1970’s and a pioneer in hip hop DJing. He is currently working on a new project with acclaimed director Baz Luhrmann and was actually recording at Groove as part of it. The Grandmaster is an associate producer on ‘The Get Down’ an upcoming musical drama which will be airing on Netflix later in the year. (Tune in and maybe see your own beanie bobbing away in the crowd). At one touching moment during the set, Grandmaster Flash paid tribute to his friend and idol David Bowie and played ‘Let’s Dance’ in his memory. Although he played slightly over the running time, he was cheered back on for a quick encore before disappearing into the Badaguish trees and thanking us for coming to his party. A pleasure.

And all too soon, we were at the end of the après ski! We will wait expectantly to hear if the people behind Groove think they can pull it for another year, but in the meantime, tickets are now on sale for Groove Loch Ness, only five months away!

Check out our coverage of the Groove CairnGorm.