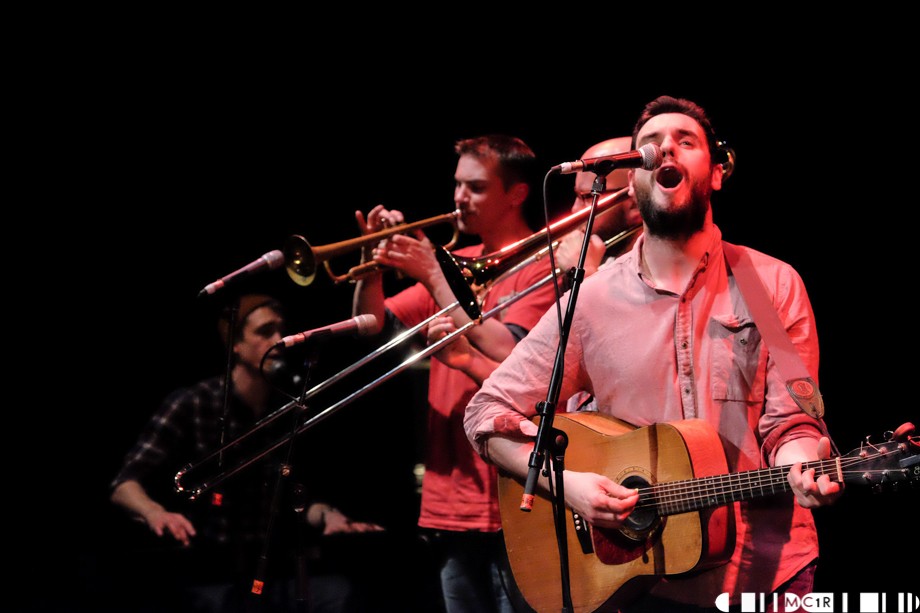 Woodenbox ,with support from Randolph’s Leap, at Eden Court, Inverness 25/3/2016. A Review.

Friday night in the fantastic Eden Court One Touch theatre kicks off with a bit of a blunder from support act Randolph’s Leap’s leader. Singer Adam Ross has put out the set list for last nights gig in Stirling and has to go offstage and change them all for tonight’s list. One might wonder how different they were ? Then he has to go off again as he’s forgot his capo.  Rather endearing, if a bit fumbly.

The 7 piece band including guitars, drums, fiddle,brass and keyboards then soldier on with a spirited set including “Hermit” and the quite brilliant “I can’t dance to this music anymore” . Special mention goes to trumpet player Ali Hendry who has a little dance every now and again as the music takes her.More of the band, in fact all bands, should get into the groove like she does !

After a short break the main attraction for the evening Woodenbox . I am sitting beside Steven and Colette dedicated Box fans who have already met the band earlier on in the day. Colette proudly showed me her, now autographed, green vinyl copy of Woodenbox’s new LP record “Foreign Organ”. It’s green because it’s on the Olive Grove Label. You see what they did there? Very impressive indeed.

I am assured this will be great and it was.

This six piece indie band is similar in instrumentation to their support, but give a more assured and polished presentation of their music.

From the kick off lead singer Ali Downer is right up for a good time and encourages the audience to join him. This indie brass/ keyboards/ guitars sound is very infectious. A sort of modern Scottish Dexy’s sound. The band are very tight and the result of having a fair few tours under their belt including a visit to SxSW as far back as 2012.

I particularly liked drummer Nick Dudman who’s excellent playing and style really reminded me of Levon Helm of The Band.

Songs which impress are the fantastic “Easy Life” from the End game album and the excellent “A9 North” and “More girl than Friend” from the aforementioned Olive Green Vinyl album .Now joined by Fraser Gibson from Randolph’s Leap on trombone, the band is relentless in it’s ability to make folks feet tap.

Some , like my new friends Steven and Colette are unable to sit still and congregate down the front at Ali Downers bidding to dance to the second half of the set.

This band are, as they said themselves “usually in Hoots” when they come to Inverness , however the fantastic sound in this venue in Eden Court allows them to shine.

I’d go back to see them anytime you like.

Catch photos of the evening.