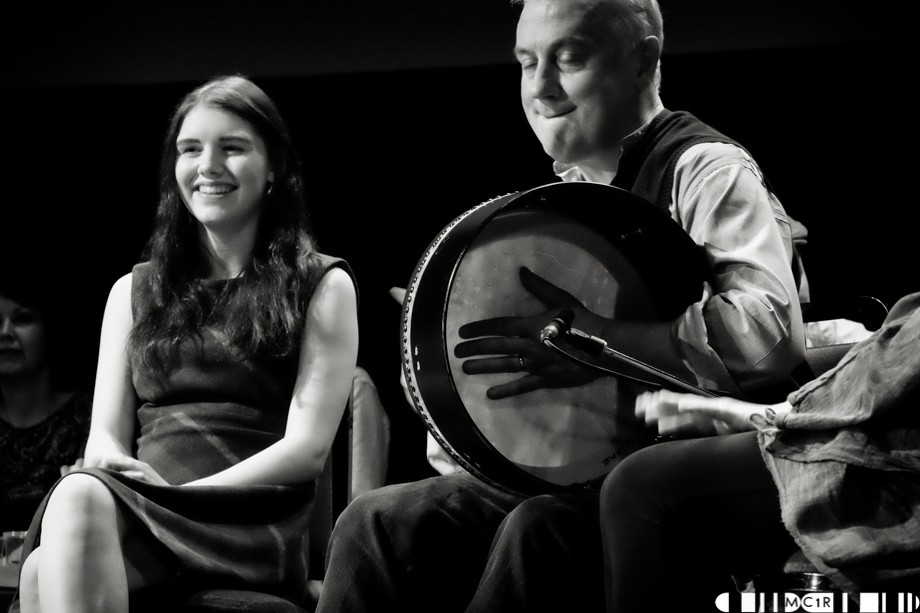 Trosg and Friends at the One Touch Theatre: 26th March 2016. A review.

To be honest, for this piece to have integrity it really should be written in Gaelic: alas that is well beyond a monoglot like me. Now, given that there was precious little English language present on the evening one question might be did this make it difficult for those of us whose Gaelic is restricted to Marks agus Spencer? Not at all: this was a delightfully well-conceived, curated and produced event with collaboration at its core, and that extended to the audience. The design of the event meant that it felt intimate and inclusive.

In part this was due to the fact that throughout the evening, all of the performers remained on stage essentially becoming audience themselves. The show had a format that responded to the four seasons, each season being given an act with visual cues comprising of projected images and a subtly changing lighting palette.  Each act kicked off with Marloch treating us to some fine tunes, followed by a drama (in four acts, of course) played out by Catriona NicNeacall and Aonghas MacLeod. Thereafter with friends like Siaban and the trio of Eilidh NicCoinnich with Peigi and Donald Barker there was an enormous amount of talent on stage.

It was well paced, and there were well judged variations in tone, intensity and emotion. Throughout, voice was at the centre of it all, whether that was from a fine solo performance by Saffron Hanvidge, the mix and match of male and female groups or of course, the gentlemen of Trosg, without whom . . .

Everything about this event felt right, the sound, the lighting, the stage set: indeed even the programme that had been prepared for the evening. It was all good. Whether you understood a word of it or not, it was such a rich immersive experience that you couldn’t help but be drawn into it’s heart. When traditional song, drama and music is presented like this, with care and attention, then it all feels very contemporary.

If Trosg go for anything like this again, make sure you get along, these events are rare things not to be missed.

See pictures of the evening here.