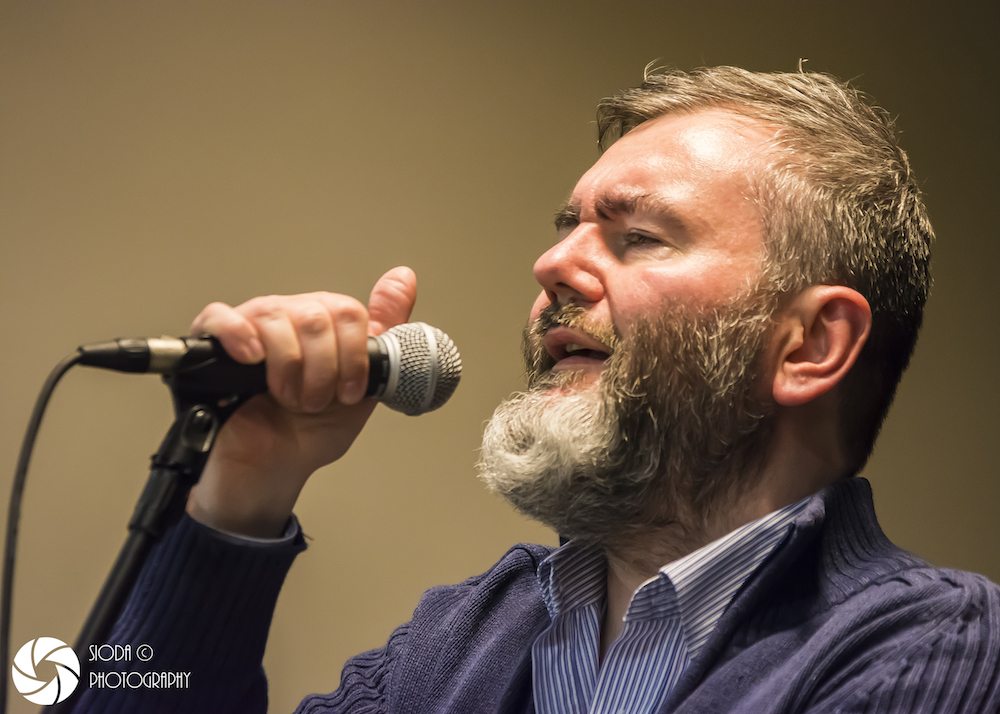 Aidan Moffat previews his new film ‘Where You’re Meant To Be’ at Drumnadrochit Village Hall.

Film reviews aren’t something we do a lot of at iGigs but the chance to see a short set by Aidan Moffat and a preview of his film ‘Where You’re Meant to Be’ was too exciting a prospect to miss.  Especially a film as raw and uncompromising as this and one that almost seemed to come about by accident. Additionally it’s one in which Moffat is often seen as being the butt of the joke, whether it’s falling on his backside trying to negotiate sand-dunes in Ness on the Isle of Lewis or to have his musical ability called into question by a critical Sgitheanach crofter.

The premise is that his reworking of traditional songs by the Stewart family, a long line of Scottish gypsies, is given a dim view by the last in that line, Sheila Stewart. Ever the traditionalist, any tampering or ‘modernisation’ of these songs is seen as taboo. In one of many to and fro conversations she patiently explains the religious connotations of one of these before being frustrated by Moffat’s alternate version, exclaiming, ‘You’ve taken the context and blootered it!’ He looks chastened at this but it doesn’t stop him from taking the songs on tour round some of the more further flung venues in Scotland before finishing up at Glasgow Barrowlands. The audiences are a mix of challenging or utterly disinterested and the venues equally as quirky before the eventual triumphant finale in Glasgow. Although the look of utter disgust from one Niseach as he performs at the Ness FC Social Club is priceless.

It is without question beautifully shot and the long lingering panoramas across the Scottish Countryside are magnificent. Director Paul Fegan manages to keep away from anything too stereotypical and ‘shortbread tin’ and gets to the very soul of the country. Which along with the landscape, is of course the people and their various quirks and habits. And this is where it stops becoming a film solely about Aidan Moffat and his take on some old traditional songs and becomes a celebration of the vagaries of small (and large) Scottish Communities.

Skye Crofter Iain in particular very nearly steals the show and there is a beautifully moving piece where, having dismissed our protagonist as being ‘no kind of entertainment’, manages to persuade them to sing ‘Wild Mountain Thyme’ instead. There’s more to it than that and I’ll save on the spoilers, but it is a singularly powerful piece of film.

Fittingly Drumnadrochit features heavily and a rivalry between two Nessie Hunters George Edwards and Steve Feltham is explored in some depth. In particular Steve’s low opinion of George’s hoax photo of ‘Nessie’ that fooled the world’s media and the obvious chagrin that Feltham has for initially falling for it hook line and sinker. In a peace deal that the UN would be envious of, Moffat manages to get these two together, and with a liberal dose of whisky, brokers a new blooming friendship between the two. However, whether it’ll survive more than a couple of tourist seasons is anyone guess.

There’s a healthy respect here for Sheila Stewart and whilst there is a clear sense of mourning the loss of the last of this particular line of gypsy singers it’s tempered with humour and no little joie de vivre. Aidan and Sheila have some fairly significant differences in the way the music should be portrayed and performed and she doesn’t hold back in telling him exactly how she feels it should be done. It’s a very Scottish relationship, not feart of telling each other exactly what they think of each other but never managing to drive the other away entirely. The two are clearly quite fond of each other despite disguising it with typically Scottish bluff and bluster.

The title song of the film ‘Where You’re Meant To Be’ isn’t actually included in the film, according to Paul this is because it’s ‘shite’ to which Moffat replies ‘Aye, fuck yer film’ to the delight of a now fairly well lubricated village hall. ‘The Parting Song’ which weaves its way throughout the film is performed here too and there’s more than a few glasses aloft when he sings, “Let’s drink and be merry/All grief to refrain/For we may or may never all meet here again.”

The tour continues into next week and we’d heartily recommend taking in one of the preview screenings before it comes out on general release. You can catch it at the following venues: