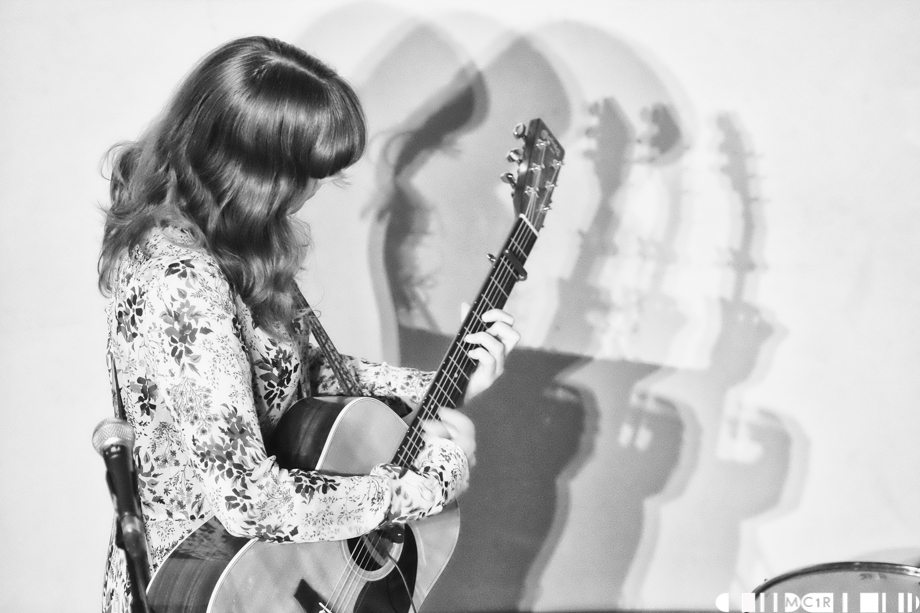 Tiny Ruins with support from Imogen Islay Hay at Eden Court on Friday 13th May. Photographs and Review.

This was my first time at Eden Courts’ Provost Smith Memorial Chapel and what an inspired choice for this gig. Small and intimate, seating for about 30, it showcased the two performers for the evening perfectly.

Previously, I have been alerted to the fact that playing to a quiet, attentive, listening audience can be more challenging than a gig with noisy back-of-the-room chatter going on. If this fazed either performer it certainly didn’t show. In this respect I was really impressed with Imogen Islay Hay, a young musician with nothing but her voice and her Clarsach between her and the audience.

I last caught Imogen in December 2014, since when she has appeared at Belladrum Tartan Heart Festival and released her first EP Little Dragon in October last year. The EP features ‘Ghosts’ (written age 13) and ‘Red Apples’ and these are well received this evening alongside a Suzanne Vega cover – ‘The Queen and the Soldier’ – and an as yet untitled new song. Of the possible titles my personal favourite would be ‘The Raven’ (but having a corvus fetish I am biased).

It’s clear from even a brief chat with Islay that she has a strong creative poetic spark, there is real depth in her lyrics. A multi-instrumentalist with a lovely voice, Imogen is set to appear at The Pentahotel venue in June as part of this years Xpo North – get along, you wont be disappointed.

Conceived in 2009 by singer songwriter Hollie Fulbrook to describe her solo output, Tiny Ruins by contrast comes to the stage with a heap of gig experience behind her. A set of two-halves, Hollie is joined in the second by Hamish Kilgour on drums. Throughout the set there is a consistent aesthetic. Drawn from folk and blues roots, voice and guitar create and sustain an immersive, melancholic and bewitching set. When Hamish Kilgour joins on subtle shuffling drums and percussion shifts the timbre but the haunting continues.

The set, of course, includes songs from their collaboration ‘Hurtling Through’ featuring two songs that set poems from WB Yeats to music: ‘Aedh Wishes for the Cloths of Heaven’ (you’re bound to know the ‘tread softly for you tread on my dreams’ line), and ‘The Song of Wandering Aengus’. The latter was in turn inspired by Christy Moore’s version although I’m quite fond of Donovans offering. Hollie had spent time in Leakey’s earlier in the day, searching for Scottish poetry and her love of poetry shines through in her work. This is another artist with a poets eye, her lyrics are rich with a metaphorical depth to them.

She has a charming presence on stage and I will always be drawn to artists who take the time to share the inspiration and back-story to their songs. Like her ‘Scottish song’ ‘Jamie Blue’ penned having taken shelter in the ‘oldest house in Glasgow’ and a chance encounter with the history of the character so called because of the dye off the blue buttons he sold. At one point she apologises for having talked so much – no need it was all part of a very fine show. It seems wrong to pick a stand-out track from such a strong set, but her new single ‘Dream Wave’ recorded with David Lynch is stunning.

No point in me searching for comparisons – most often compared with Mazzy Star, Nico and Nick Drake, that sums up what you can expect. But, along with the folk blues influences, Hollie does something quite magical with those ingredients that is truly unique. Would I be pushing it too far to say this artist in that space had something of a transcendent quality about it – I don’t think so.

Enjoy the photographs of the evening below;