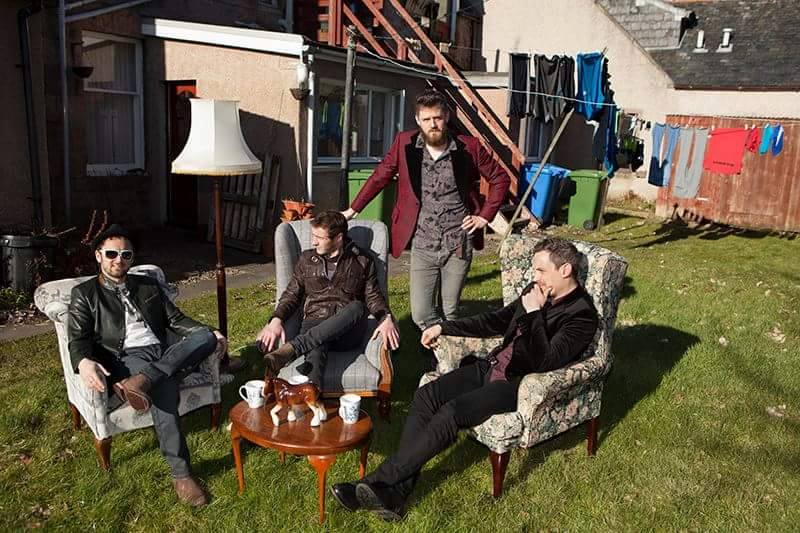 Interview with Searching For Donkeys.

The week before Searching for Donkeys supported Space at the Ironworks, I was invited round to have a chat with three quarters of the band (with drummer, Barry Macfarlane on his travels).

For the uninitiated their Facebook page proclaims that they have been “Slapping crap music’s face off since 2012”, their branding of indie- rock has a comfortably retro feel.

Searching for Donkeys are a band that with hard work and determination has seen them build up an impressive CV including supporting Simple Minds at Hogmanay and The View in Campbeltown, also overseeing the release of their EP Dirty Lunch and of course playing the obligatory festival slots. Whilst the dream T-Break slot is still elusive, it is not related to lack of effort.

Certainly from an outsider to the band, they appear to be a band with a clear plan or at least a guiding strategy, so I was surprised when Graeme (Gilchrist (Guitar/Vocals)) candidly commented “You’ve known us a long time”, the hint of an exclusive is tangible, Graeme adds “There is no masterplan”.

It’s a theme that returns again when they talk about the recordings that they did last year at The Animal Farm in London and the delay in getting those organised. But I suspect that they are being unfairly harsh as most bands can empathise with juggling work and home life with the desire to keep the momentum going.

At the moment the enthusiasm for the band is clear, the trio share ideas and discuss plans as the interview continues, there is a real buzz for what they want to do. Also you can’t help but note that where in some band’s individuals may take the lead, for Searching For Donkeys they certainly appear to all take ownership of all of the elements of being in the band, including promotion.

Currently it is about how best to use the previously mentioned newly recorded material. The band have recently released their first music video (and new track) ‘It’s On Tonight’, an ambition that we talked with the band about when we last caught up with them.

The video, Graeme explains “it’s a group of ideas and group of folks thrown together” which include drone footage and live video, “it was all very lo-fi”. Gordon (Ross (Lead Guitar)) added “ we thought we would experiment and do a story-line video”. The end result, given the band’s perspective, is surprisingly cohesive.

Video is definitely something that they are looking to explore in the future “if you’re going to introduce yourself musically , you need to introduce yourself visually”, Graeme adds.Unsurprisingly they have already recorded a second video, which will be using a live shot video and thoughts are already moving towards a possible third video release, such is the way the Searching For Donkeys thoughts work.

But it is not just videos, the group are working hard on developing new material, identifying five new songs that they have developed. They have also been working with local artist Fin Macrae of DUFI Art on some design work. This adds to what they describe as a “bank of work” that they are building up and hoping to use over the year. Indeed “It’s On Tonight” will be the first of three singles to be released before summer and will be available as an EP in the near future. Check out their Facebook page for more details.

They readily accept that “The calendar is not as busy as we would want”, although they are currently pursuing gigs and as the promotion and general work continues this will undoubtedly change. They are also using the links that they previously built to promote previous tracks on radio (and internet radio), which had seen their music also being used in a mountain biking video and also having their track played at a Caley game. All elements that help to build their stature.

With more recordings planned, the band are not resting on thier laurels, so expect to be hearing and seeing a lot more of the guys in 2016.