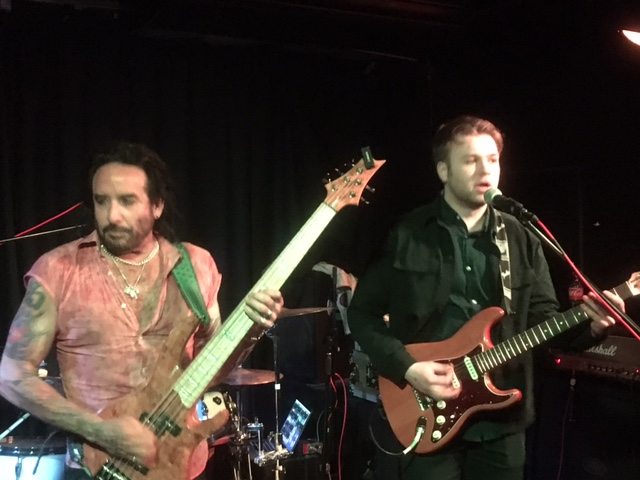 A Friday night in Hatters and there was a definite buzz in the air .

As the lights fall on the bright red hair of our support artist Beth Blade. She can belt out a song it was unsurprising that the crowd warmed to her very quickly. Her band The Beautiful Disasters are a tight unit and get the job, of making a proper racket, done.

The main buzz however is all about Marco Mendoza . Even his name is pretty much a rock star name innit ?

This guy is full on in every way. He looks the part and has a casual ease about him when performing which lets you know he’s not phased about playing a venue which is easily a hundred times smaller than his usual haunts.

Mendoza has played bass for a whole load of rock bands including Whitesnake and presently The Dead Daisies. He also stepped up to the plate to fill in and  play bass for Thin Lizzy a band with possibly one of the worlds most famous bass players and a job he took on and carried out with aplomb. In researching his career I see he played bass with Bill Ward of Sabbath , The “Blue Murder” album with John Sykes (that album was a fave of mine way back) and also was with Right Said Fred who were too sexy for their shirts !

Diversity in a musician is a wonderful thing.

This short one hour set is great and shows Mendoza’s talents as both bass player and singer. His rendition of  “Give Peace a Chance” gets the crowd 100% on his side and when he takes to the floor coming amongst the people to strip back to just bass and voice to sing a blues song his place in the audiences affections is sealed. Not a stand offish star but a showman.

Josh nails it and the crowd are well chuffed a local lad has been made welcome .

Marco Mendoza made a lot of friends here tonight and if he returns as promised next year I’d recommend it’s one gig you consider turning out for.

It was a heavy rock gig yes but it was also proof that the genre does not necessarily require macho posturing to entertain.

He didn’t play the Right Said Fred hit but maybe next time.