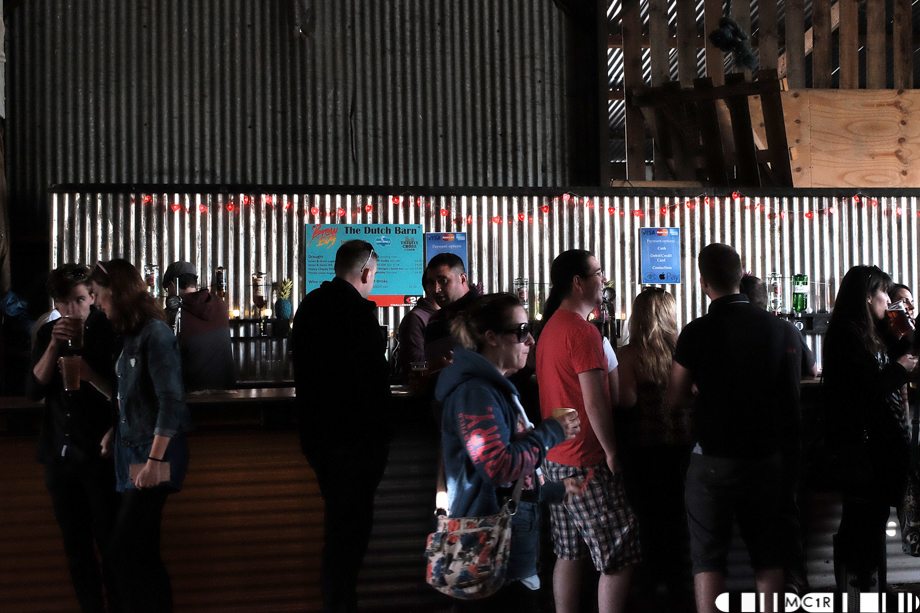 Known as the Barn Stage last year this stage hosted an exceptionally high level of talent this year. Sponsored by venue Bloc+ in Glasgow the sound of the city was transported to Brew at the Bog. I think unarguably Glasgow is at the heart of Scottish music right now, with many of the up and coming bands forming and basing themselves there so it was understandable that with a Glasgow sponsor that there was going to be a high level of Glasweigan acts. This beautiful stage hosted a huge variety of music from heavy rock to acoustic spoken word.

One of the stand out acts of the weekend The Vegan Leather were not only popular with the crowd but with other artists too. The four piece group from Paisley dominated the stage with cleverly structured songs with both singers bouncing off each other seamlessly. This musical juxtaposition creates an interesting sound which can be heard on their debut 4-track EP ‘This House’. However, I have to say that in listening to their recorded music after Brew their performance outshines it hugely.

This great live act enthusiastic about their music are making their influence on the incredible Glasgow music scene as they are set to play at King Tut’s and T in the Park this summer. Influenced by the likes of Muse and Metronomy, The Vegan Leather combine the light hearted disco feel of Metronomy with the mammoth sound of Muse to create a blend that works perfectly. The Vegan Leather should definitely be on your –to see- list and I hope to see them again soon!

Once again, hailing from Glasgow HQFU who, although being alone on stage more than dominated it and produced a well-mixed progressive dance set. 2016 marked the year that HQFU released her debut album ‘HQFU Mini Album’ on vinyl and digital platforms which included a pervious single ‘Cashle$$ Lip$’. This act is 100% guaranteed to get you on your feet and had me dancing like crazy.

Scheduled to play at ‘The Hug and Pint’ and ‘Doune the Rabbithole’ HQFU is certainly making her mark on the Scottish electronic music scene. Having featured on Vic Galloway’s ‘Acts To Watch 2016’ and done a live session on BBC Radio Scotland this act is set for great things and you should definitely get yourself down to anything that she’s involved in for a fantastic night!

Seemingly good friends with the fantastic HQFU, Bossy Love brought their RnB/Pop sound to the Bloc Stage at Brew at the Bog 2016. Australian born singer Amandah Wilkinson and John Baillie Jr remind me of AlunaGeorge with a slightly dirtier sound which makes their live performance exceptional. Engaging, lively and packed with great moves Bossy Love are set for a busy summer of gigs playing at West End Festival, Glastonbury and the Edinburgh Fringe Festival.

Their debut single ‘Want Some’ earned the band a deserving spot on the Shortlist for Glastonbury’s ‘Emerging Talent Competition’ which they went on to finish second in. This exemplifies their unquestionable talent that Michael Eavis himself thought them worthy of second from the 8 bands shortlisted. Undoubtedly Bossy Love will go onto bigger and better things. At this rate we could see them headlining Brew in a few years time!

Roman Nose tore the roof of the Bloc Stage at Brew at the Bog 2016. These guys were unequivocally one of the greatest and most intense electronic acts I have ever seen. Up there with a Young Fathers DJ set I have not had such a good party this year. The DJ and drummer combo is a proven winner as it brings together a pre-recorded and purely live mix that an audience really appreciate. Having taken a long break dating from around the time they played Brew at the Bog in 2013 the duo were back with a bang as if they had never left at all.

The barn was packed with people dancing was the closest we got all weekend to a moshpit. Their return is marked by the release of their third EP ‘Jacked Up On Mercy’ which includes the tracks ‘Bloodstains’, ‘Agrophobic’, ‘Black Pope’ and ‘Solid Gold’. Like many other dance acts such Daft Punk and Deadmau5 Roman Nose perform wearing masks. Their wrestling personas suggest the showmanship and intensity of their performance.

Having played venues such as the famous ‘The Arches’ in Glasgow in the past Roman Nose will most likely come back to dominate the Scottish electronic dance scene and personally I can’t wait to get myself tickets to another one of their events.