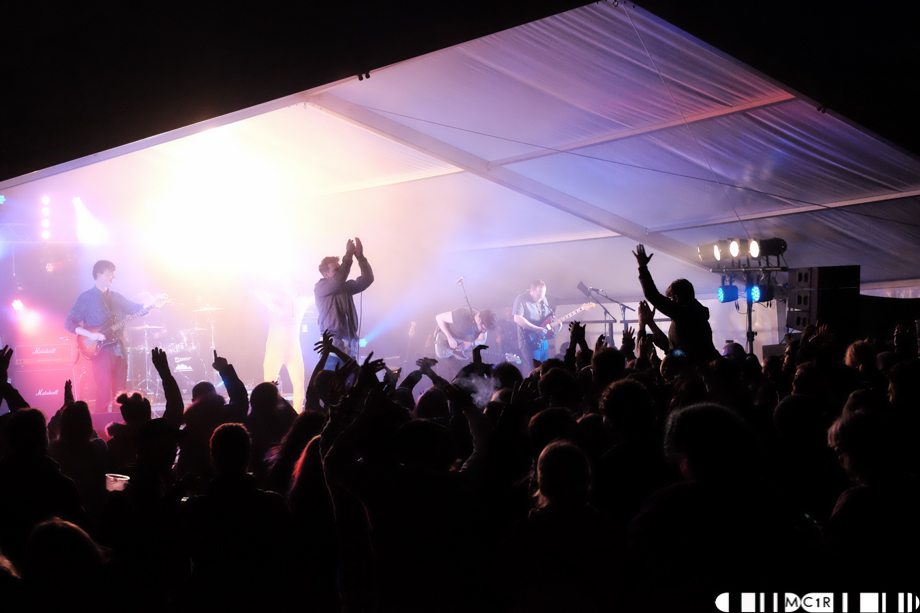 The Main Stage at Brew at the Bog, Day One. A Review.

It doesn’t feel like a year since we last did this but this weekend we headed back to the Bog for another weekend of cracking music and many beers.

Following on from last year, the festival organisers announced that there would be several changes made to the festival format for 2016. Notably they decided to change the date from May to June but they also shared that they planned to lower the price of drinks at the bar and cover the main stage, after last year’s miserable weather left it deserted at points. The pints were definitely cheaper this year and the layout of the festival has seen a reshuffle however the main stage remains uncovered.

It has moved to a more central and sheltered position which worked well over the weekend. Last year, the Northern Roots stage was undoubtedly the heart of the festival, unfortunately the stage has now moved indoors to a very cosy corner of the barn, although it looks great, its proximity to the bloc stage lead to a big clash of sounds and styles when stages were occupied simultaneously which could not always be politely ignored.

Apart from this reshuffle, I would say that Brew at the Bog 2016 worked really well as an event and the atmosphere was great, helped tremendously by the above-par weather on Saturday. Across the three stages, there was something for everyone.

Kicking things off in pop punky style on the main stage were Glasgow band Armstrong. In the past they have been called Scotland’s very own Paramore and it’s easy to see where this comparison comes from. Lead vocals from Nicole Mason are powerful and punchy, which  Paramore’s leading lady Hayley Williams is known for.

I enjoyed their performance but wondered as I was watching them how much room there is in the Scottish music scene for this in-your-face, pop punk sound that was oh-so popular during my early teens but as I look around the web now I can see that the band are definitely creating a buzz, and they’ve worked hard to make room for themselves and get out there. They’ll be back in the Highlands shortly to play Madhatters at the end of the month.

This year Brew at the Bog took a big step in widening its musical horizons in terms of including English and Irish acts. Although still a champion of home grown talent Brew’s choice in ‘international’ acts was impeccable. Ex-Libras, hailing from London brought an Atoms For Peace sound to Brew this weekend. Ex-Libras released their debut album ‘Suite(s)’ in 2011 and have seen success with their single Underachiever doing well. Unfortunately, Amit and the boys have no immediate gigs scheduled due to Kieran’s wife expecting a child soon (congratulations to them both) but I know for certain that when down in London next I will be checking to see if their playing. A great live act and truly lovely people.

The Van T’s have been on my radar for a while and their live performance on Friday did not disappoint in the slightest. Incredibly talented, vivacious and full on, the Van T’s fronted by Glasgow twins Hannah and Chloe Van Thompson are all round gems, with both an engaging stage presence and a great EP released in 2015. They also recently released a new song Blood Orange which they treated us to this weekend. The Van T’s will be back up the A9 in no time at all, as they play XPO North later this week.

Described as a Glasgow band PAWS do in fact include a member from Tain in Josh Swinney. Currently touring to promote their new album ‘No Grace’ PAWS are best known for the songs ‘Sore Tummy’ and ‘Jellyfish’ from their debut album ‘Cokefloat!’. Being quite a big fan of their first album I unfortunately felt that their performance at Brew lacked slightly. However, that is not saying that it was bad at all with the crowd reacting beautifully to song after song.

Their tour is set to take to the far reaches of the UK with a date every day for roughly two weeks (I can’t imagine how tired they’ll be by the end of that). I will most likely try to get another PAWS gig in the future as I’m sure there must have been something wrong with me to not have been fully immersed in their performance – maybe I’m getting too old for a full day of music without have a nap (I’m 19…).

As a heavy fog descended over Bogbain in a sort’ve ‘night of the living dead’ fashion, anticipated Friday headliners The LaFontaines showed up to party. Ahead of time, there was a bit of chat as to whether The LaFontaines were a worthy ‘headline’ act for the festival but my unwavering faith in their abilities as a live act led me to believe they would more than do the job and I would say that I was proved correctly. Admittedly, the Fonts came clean and admitted that they did not actually have the full ninety minutes worth of material that was expected of them, which led to some hilarious stalling.

Their mix of Scottish hip hop and big pop rock choruses really got the crowd going, along with their intermittent efforts to get audience members on the stage. They successfully welcomed a power ranger and a luminous orange, morph suit clad man up to join in the performance. The benefit to having such a long set and not a lot of material (having only released one album, Class, to date) was that the band had very little choice but to treat us to their older material, popular with fans but rarely making it into their live performances lately. I believe a standout moment of the whole festival was Font drummer Jamie Keenan’s vocal performance.

A rare sight to see him come from behind the kit, he treated us to an altered and hilarious rendition of much loved scottish children’s rhyme using the chorus ‘oh i canny get my granny of the drugs’. I’ll leave the versus to the imagination..

The whole set went down a storm with the crowd which was sizeable considering they shared a time slot with popular dance act Roman Nose and Bombskare on the Northern Roots stage. A cracking end to the first day of Brew 2016.