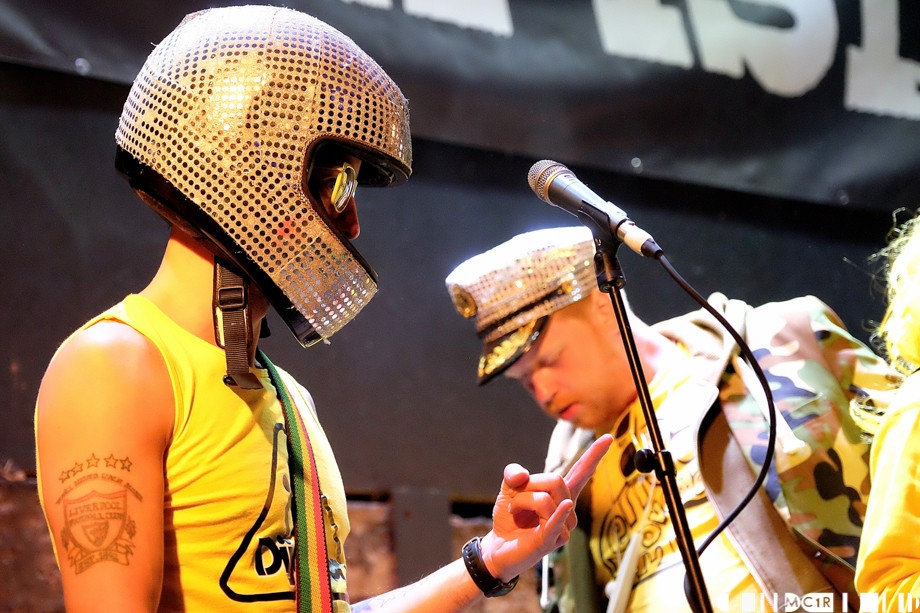 Vasa, once again, hailing from Glasgow opened the second day of the Bloc Stage at this years Brew at the Bog. The four piece instrumental rock band fronted by an extremely skilled 6 string bass player started the day off with a bang. Having recently released their debut album to great reviews the band are showing that music doesn’t necessarily need vocals to be triumph.

Touring a lot, the band seem to be going from strength to strength having recently played at the sold out A COLLOSAL WEEKEND in Copenhagen. I’m sure the crowd there were as receptive there as the modest crowd (of true music fans due to their early slot) at Brew this year. This explosive sound that can be compared to that of Russian Circles sure made an impact.

Polaroid People’s performance was definitely one to remember. A rock/rap crossover group with connotations of the incredible Rage Against the Machine showed Brew their literal ‘in your face’ performance which was completely captivating. Not only did the frontman lie on stage during their performance but he also ventured out into the crowd prompting ‘SQUARE GO’ and left the room completely to go to the bar all while still rapping.

If this is what all Polaroid People gigs are like then put me down for another one. With a busy summer ahead of them catching them at Audio Soup will not be something you will regret. Recently heralded as an act to watch by the Sunday Herald (see what I did there?) this skateboarding, rap/rock band will surely be around for some time.

Another young act from Glasgow, Be Charlotte is definitely one of the big up and coming acts of Brew at the Bog. Fronted by Charlotte the trio have been making huge steps towards success since their formation. Having recently released their first single on Kelvin College’s music label ‘Electric Honey’ Be Charlotte is set to play Kelvingrove Bandstand, Belladrum, T Break and Electric Fields.

This unique act not only has one of the most incredible voices I have seen live but also delves into spoken word, hip hop, electronica and many other genres of music. Definitely one of the stand out acts of the weekend she is part of a great community of musicians including the fantastic Hector Bizerk and Pronto Mama who are undoubtedly fantastic influences not only sonically but personally too.

If you want to be able to say ‘I saw them before they were famous’ and you’re generally into brilliant music then you should 100% see Be Charlotte this summer and every other chance you get.

Like Hector Bizerk? Like Be Charlotte? Like Pronto Mama? You’ll love Louie and the Lochbacks. The frontman of Hector Bizerk, Louie has enlisted the help of Charlotte Brimner of Be Charlotte and two members of the wonderful Pronto Mama to embark on a new musical project. The outcome is outstanding. Louie reads his own spoken word poetry with the vocal and instrumental accompaniment of his fellow musicians and they’ve got the balance between musicality and poetry just right with enough to add to it without detracting from the words. It was the quietest crowd at the Bloc Stage all weekend as everybody listened eagerly.

At one point Louie read a poem he had written concerning the shortcomings of Scotrail which was met with unbounding applause. This was only the third time the band have come together but what they’ve created is something really special and I hope they will continue to persue this among their own individual busy schedules.

For those who didn’t fancy Idlewild things wrapped on the Bloc Stage in big, crazy, yellow fashion. Time for Colonel Mustard and Dijon 5. Throughout the day people had been arriving at the festival in a series of bizarre outfits and having never seen the band before I assumed these were some quirky crowd members but no, they were actually the band. There was so many people on that stage that I’m not certain I counted right but I believe there were 8 Dijoners on stage on Saturday contributing to the wacky, fun noise emanating from barn.

Their facebook page cites their genre as being: ‘Rock ‘n’ Roll, Indie, Comedy, Country, Flamenco, Punk, Disco, Funk, Gypsy, Hip-Hop, Old School, New School, North Lanarkshire Ska & Reggae.’ so a real mustard mix there. To say they were there to have a good time would be an understatement and the whole crowd was eager to get behind, well…whatever they were doing. A memorable end to the Bloc Stage antics!