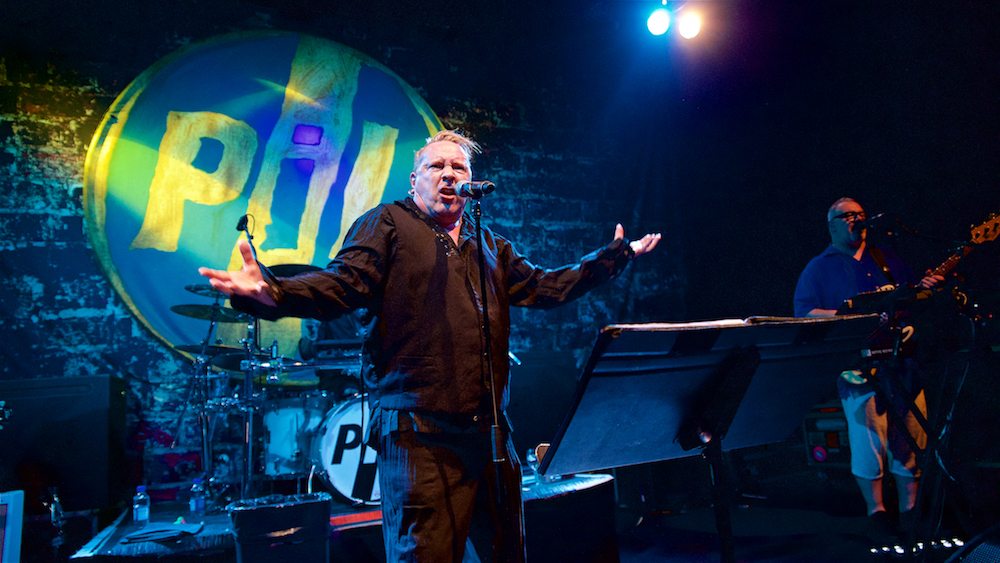 “Turn up the bass!” the crowd at the front were yelling. “Push up the BAAASSSS” they cried. Johnny Rotten nee Lydon gestured, eyes popping, raising his arms, flexing his fingers, and intoned into the mic, “Tuuuuurrrrrnnnnn uuuuuppppp theeeeee baaaaaasssssssss!”.

And, with the band fired-up from the news earlier that day that this concert had sold out – whole UK tour now sold out – this Ironworks gig turned from an already-fever pitch show into a foundation-shaking deep bass punky ravey party. We’re talking liquidised molecules here. Blessings upon the soundman who got The Message and turned all the sub-woofer frequencies past infinity.

From the mosh pit down the front, to the back of the balcony, the Ironworks rumbled like ne’er before. The whole building was shaking. In a good way. The best way. For the first time for this reviewer, the Inverness crowd – made of of folk who travelled far and wide – was like the best audiences in the word, which you’ll find in Ireland, of course. People were just lost in the music and in the moment. This is the best way, in case you didn’t know.

The band was on fire from the collective buzz, and tonight is the tail-end of the tour. Johnny was like a shamanic conduit of energy (anger is, after all, an energy), and the audience was soooo up for it. Tonight we’re gonna party like it’s 1989. 1978. 1666. 4,000 BCE. Timeless.

It was the double barrel shot of two songs from the 10th PiL album, 2015’s What The World Needs Now…, that opened the gates, the appropriately titled Double Trouble and Know Now, respectively. By the fourth song, the hit This Is Not A Love Song, the band had already reached communion point with the crowd, the dance-bass-trance-groove of the PiL band connecting with an audience that were totally up for being transported.

The band’s sound was part-Jane’s Addiction towering rock, with multi-echoed vox, looping bass, spacey guitar and Big Eighties Snare Sound, and part-dub slow hypnorave. Blasting the fakelore and rewriting a new lore. Which is what the Highlands wants and needs. Ch-ch-ch-changes. The essence of punk since the beginning of time. Word. Bowie is dead but we still have PiL. Rejoice.

Seeing Johnny onstage is inspiring. Yeah, the hunchback is a bit more pronounced, and he has shrunk a bit, and jaysus hasn’t the L.A. life has given him a jelly belly, yeah? But the voice is undiminished, like punk priestess Patti Smith. The eyes still have it. Bug-eyed and wild. Fierce.

The anger is still voiced with intelligence and wit, but is rightfully engrained with age, life, love and enough authenticity to forgive him for the butter advert. Don’t mention the butter. Speaking of butter and bellies, some of the audience were good mirrors for Saint Johnny. All part of the maturation process. But what does this say about a wide cross-section of northern Scottish citizens coming together for a gig like this? People wanna party and people want change.

“We’re talking about sharing some ideas, eh?” asked Johnny Lydon with a knowing sneer, as ever. The crowd cheered. It was the Queen’s birthday weekend. We were wondering if he’d mention it. He didn’t. He didn’t have to. Too obvious.

By the time the band broke into the thomping drum riff for their greatest anthem, Rise, the place was riotous. May the road rise with you is the mantra. It was like a call-out to the Highlands. High time this energy was voiced and celebrated up here. Don’t forget that the Sex Pistols’ 1996 gig in Dublin was banned. True. This is how recently artists like this can be treated by frightened, repressive minds. Beware.

The gig ended with a telepathic accordance between PiL and the Highlands: they must come back here. Soon. They must play more gigs up here. The deep bass will wash over the kirks and graves like an ancient energy come to reclaim the folklore from the fakelore. Anger is, indeed, an energy, as tonight’s gig empirically proved. Landmark gig. Although it would have been cool to have one of Inverness’ decent punk bands open the support-less show.

“I come back to you now at the turn of the tide,” as Gandalf said. So, on the same Saturday night as the dastardly Orlando club shootings, let’s remember The Message that we humans really need to work together. Enough blood and fear. More love and constructive anger. We should be smart with this energy, and use it.