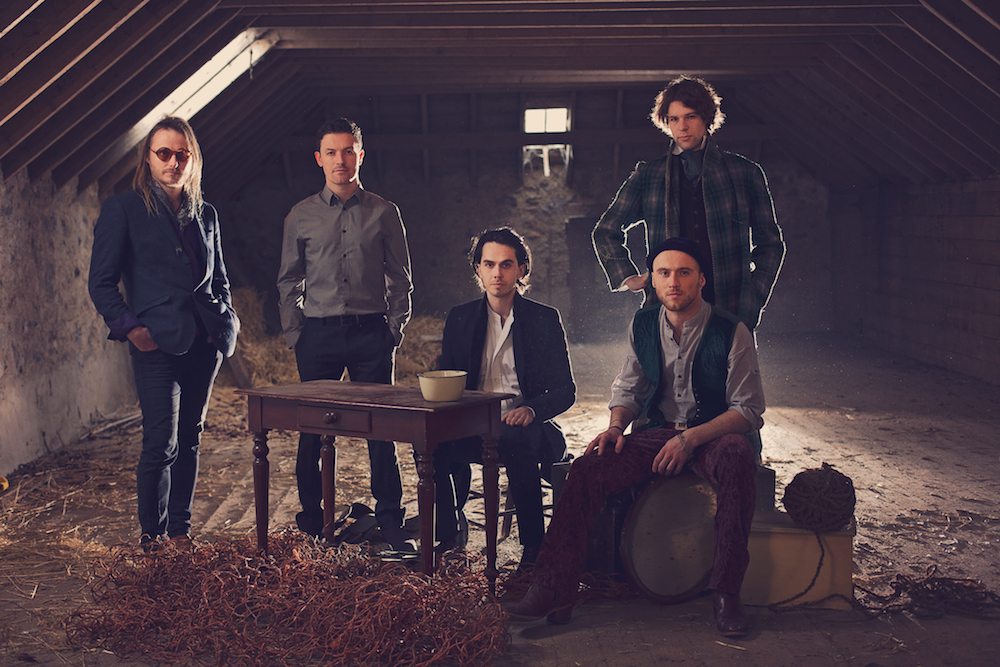 Interview with Dave Webster of Sinderins, ahead of their gig at Mad Hatters in June.

A well documented name change, and a change of direction for the proud Dundonians sees the release of the band’s debut album out on the 24th of June. Frequent visitors to the area they return to Inverness as part of the build up to the official release.

Your name (for the uninitiated they were previously Anderson, McGinty, Webster, Ward & Fisher) sees you clearly align yourself to your Dundonian roots, do you think the area is also represented in your music?

Dundee will always be present in our music. The links to the city aren’t as obvious or as direct as Michael Marra or The View perhaps, but it’s certainly in there. It was interesting working with our producer Matt Lawrence. He’s a Welshman and he’s worked on some incredible records. Whilst recording the album there were moments when Matt was like “guys that’s sounding really Scottish” but we couldn’t always see it.

What are your thoughts on the music scene of your home town?

Dundee has an unusual music scene I guess. It comes in peaks and troughs. For a while it was bonkers. Every weekend the pubs were filled with bus loads of music fans from all over the country, but it seems to have simmered down at the moment. Most of the bands making headway are doing so outside of the city but i guess that’s for the greater good. Saying that, i’ve seen an huge increase in talented young musicians on the scene lately which should herald an influx of music fans to the city once again.

The artwork for ‘Fayre’ (lead single for the new album) is striking, how important is the whole artistic package that goes with your music?

The artwork for our album was put together by our good pal Doug Harley. He’s been on the road with us for a few years taking on the tour managing duties whilst capturing the essence of the band in his own artistic drawings and photographs. We are musicians first and foremost but in this day and age people need more information so we had to make decisions about who could best represent us in the wide world of media. Even back in 1969 Bowie pointed out that “the papers want to know whose shirts you wear.” So it’s easy to understand how a single without artwork, without videos, social media, photographs ect is simply not enough information to grab the attention of the modern music fan.

Given the band’s ability to weave their way through genres, how representative is ‘Fayre’ of the new album?

I think sonically Fayre is a pretty good representation of the album. As with our previous work, we swap writers and lead vocalists between tracks so the influences you can hear track by track can be quite eclectic. However, Matt (producer) has managed to streamline the album, helping us achieve a more consistent, recognisable Sinderins sound. You’ll hear lots of thumping drums and atmospheric guitars like you hear in “Fayre” alongside big vocal harmonies which shape almost every other track on the album.

Now the album is ready to go and starting to get some positive reviews, how do you reflect on it’s creation, and what are your hopes for it’s release?

It’s been a long process. We’ve spent a lot of time, crafting this album. It’s all worth it tho. You get very close to a record when your making one, and when it’s finally mastered and ready for pressing, I’ve found in the past that I couldn’t listen to it without hearing imperfections. I’m not saying this record is perfect but I’ve managed to go back to it enjoy it myself. It would be great to get people on board just so we can take the songs on the road and visit as many places as possible.

It’s been five years as a band, how difficult is to decide on a set-list for each gig?

It’s been difficult in the past playing so many gigs with a huge variety of audiences. As you’d imagine you’d have to switch some things in order to work with the opposing demographic at say T in the Park and Dougie Macleans Perthshire Amber festival. I think now we’re far more settled on where we want to go. We’ve decided against playing a lot of the older songs which don’t fit with our current direction and we’ve managed to fine tune some others so it’s not all completely new.

Certainly no strangers to the Highlands, what do you think draws you to the area?

I love the Highlands of Scotland, it’s incredible just even to walk in. We’ve come back a lot as band also because the fans are passionate about their music (and whisky) and they’re always so appreciative that you’ve made an effort to travel up the A9. You get guys coming down from Wick and such places and coming from Dundee we forget how long a drive that actually is from Inverness. Hats off to them!

Sinderins play Mad Hatters, Inverness on the 22nd of June. Tickets are available online, via the venue’s website.