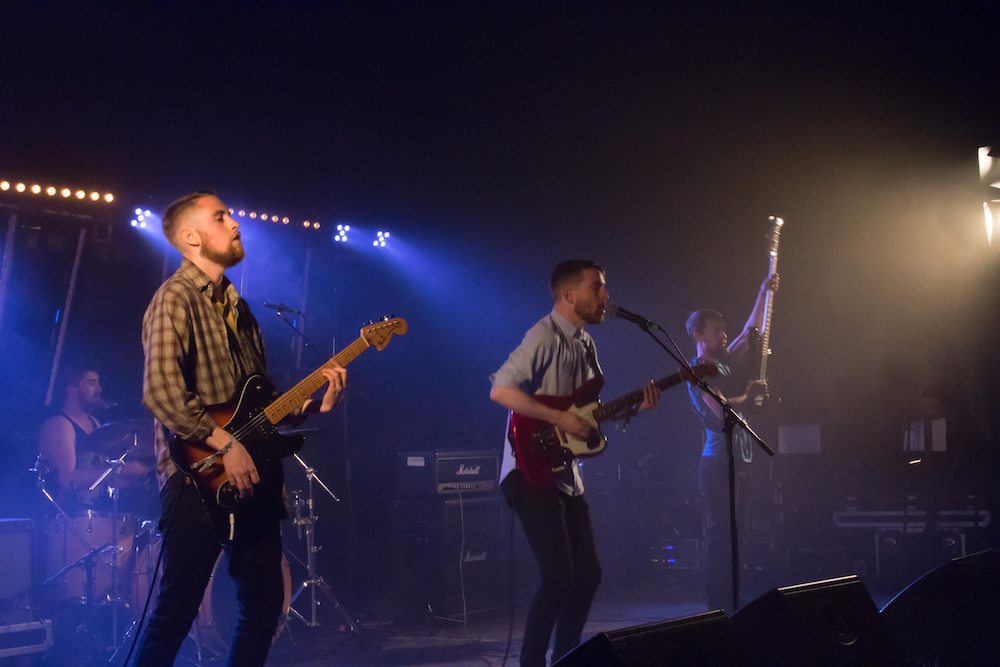 In the Hothouse Tent Catholic Action are frankly average at best. It’s a struggle to connect to the band who are a bit safe and well … catholic to be honest. They’ll appeal to fans of The Strokes and The Kooks but ultimately they don’t really have anything particularly new to say. There’s a fair dose of posturing and pouting on stage but it’s all a bit aimless for my tastes.

Fortunately, the appearance of Man Made save the afternoon and the infectious indie-rock band from Manchester are quick to make a good impression. Travelling up from ‘the North’ this morning, they have time to play the set before immediately heading back down the road to be in time for work. Their dedication is admirable and it’s matched by the shimmering jangly guitar lines and hooks.

This is their third visit to the Highlands in the last year, previously impressing us at the Ironworks and Loopallu, and frontman Nile Marr expresses his surprise that whilst they might claim to come from the North there’s still a hell of lot more ‘North’ left on our Island. Clearly a fan of Scottish crowds he seems to be genuinely chuffed to be playing at Bella and that feeling is reciprocated by those in the Hothouse Tent.

The last time I saw Be Charlotte I got her name wrong and called her ‘Wee Charlotte’ (apologies) when she played with the now very sadly missed Hector Bizerk at Xpo North in 2015. It’s nice to have the chance to remedy that mistake and additionally get the chance to see her solo material. She might be wee in stature but her ability to sing unaccompanied and drown out the godawful racket coming from the funfair contraption outside is singularly impressive.

Very much putting her own stamp on hip-hop, electronica and pop; she’s got talent in abundance and is equally happy keeping the backing arrangements simple (just drums on one song) before cranking up the volume and letting it rip. New single ‘Machines That Breath’ is very much worth spending your cash on. She’s following in the footsteps forged by Hector Bizerk, Stanley Odd et al, while forging her own very individual path. And it’s all good stuff.

Astrid are back and the cliché of the heart growing fonder is one that sticks here. They have been a much-missed addition to the music scene and the recent spate of comeback shows have earned them rave reviews and rightly so. The momentum they’ve gathered over recent months continues unabated in the Hothouse Tent and their appearance and performance is met with universal enthusiasm.

For the un-initiated they play unabashed, cheery indie rock tunes that will put a smile on the faces of the even the most cynical music hack. It’s been a long time coming but they’re back with a bang and here’s hoping they keep gracing us with their music for a long time to come. Willie Campbell and Co are evidently enjoying this new phase of their music careers.

It was with a degree of trepidation that I’d heard I was reviewing White, reviews I’d heard thus far had been mixed at best so I was (unfairly as it pans out) expecting a hard half hour or so. It’s always nice to have those expectations confounded and the band put on one of the best performances of the festival so far.

The energy, charisma and musicianship is a joy and they fire out an electrifying set of music that switches from new-romantic tinged pop to industrial rock (pictures below). The influences are pretty apparent and you can see Duran Duran, Suede (frontman Leo Condie has the moves and air of Brett Anderson) and even a bit of Pulp thrown in there for good measure. But that doesn’t mean they’re a tribute act, more a band developing and working with music that has gone before and putting their own stamp on it.

Gun are, well, Gun. There’s no surprises and this is simply a feel good rock show. You could probably squeeze them into the ‘elder statesmen’ label if you were feeling cruel but any accusations of them simply being a nostalgia act are quickly brushed off. Opening with ‘Word Up’ they bounce with the energy of a band twenty years their junior and older material sits well with newer music. Catch the images of the set here.

Super Furry Animals take to the Garden Stage in white jumpsuits (no reason is offered) and the Welshmen proceed to do exactly what the hell they want. Which is mostly play a set of stoner vibe tunes interspersed with more well-known songs, ‘Rings around the World’, ‘Juxtaposed With You’ and ‘Golden Retriever’.

They flit from having the crowd bouncing up and down in time to the music to slowing it down to let the whiff off certain herbal cigarettes drift over an increasingly mellow crowd. It ultimately has a soporific effect (the band, not the herbs) and I eventually find it a struggle to fully engage with the band.

Bloodlines star is rising and the Fort William-now-Glasgow-based upstarts headline the Seedlings stage with nothing short of joyful triumphalism. They’ve come a long way in the last couple of years and their work ethic and dedication to their craft is beginning to pay dividends and turn heads.

Chants for bassist Stephen Bull are looked on with amusement by frontman Jamie Coltart as he comments, ‘this is the Stephen Bull and the Bloodlines band’. But by Christ can they put on a show, start to finish is relentless, fist to the face rock music. Such is the enthusiasm for the band that a circle pit forms during ‘Skeletons’. It’s difficult to pin them down to a specific genre but that ultimately means little if the band can’t deliver the goods, and that they do in spades.

I managed to quickly catch up the band after the gig and they were understandably delighted with the reception. Steve Bull said, ‘We were genuinely overwhelmed by the show and the passion we saw from the crowd. We’d love to thank every single person who made it along to see us.’ Expect to see much more from this bunch.