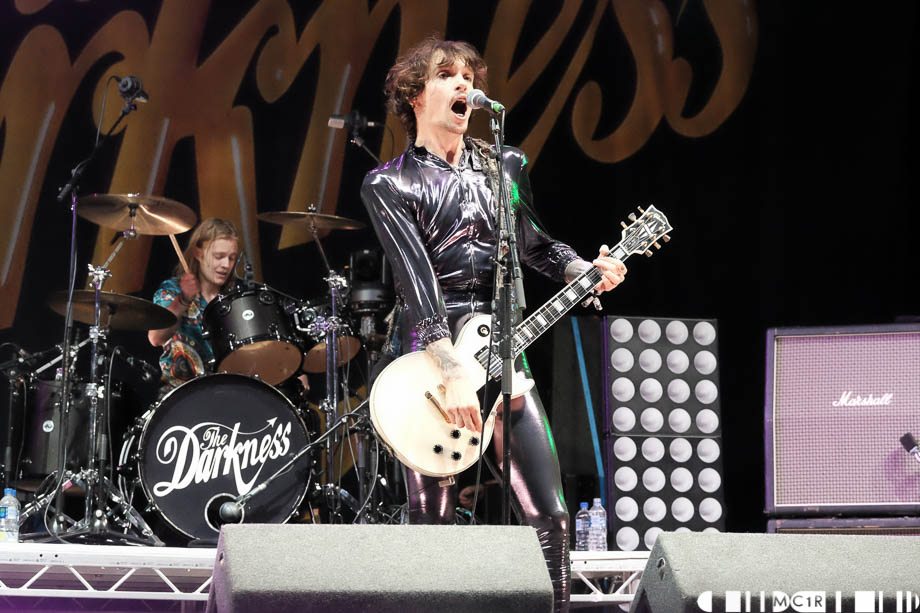 Typical of Belladrum the line-up of the main-stage for the first night offered something for everyone with the range from the traditional folk of Torridon to the Main Street Blues and nearly everything in-between and equally typical of the event there was much to see and do even when the festival was coming together.

Opening the Garden Stage was a particular difficult job this year, given that most were settling into their tents or were planning a later arrival to the campsite. However Woodentooth took up the challenge well, their brand of grunge rock complimented well by the strong vocals of frontman Rory Baldwin.

A remarkably smooth trip into the site thanks to the combined efforts of the organisers and Traffic Scotland/Police Scotland, meant that the mad rush after work was ultimately stress free and got me to the Garden Stage in time to see Tiggs Da Author grace us with a set of summery tunes fit to banish any lingering worries about the dubious weather forecast for the weekend.

His facebook bio lists his musical style as ‘Experimental Soul’ and that seems to fit the bill nicely. There’s a mish-mash of soul, reggae and Northern Soul that’s well suited to an early evening session at the Garden Stage and again shows the adventurous spirit that Bella has in showcasing newer artists at the festival. (see pictures here)

Following on we have Beardyman’s Dream Team who perform an hours-worth of hip-hop, beatboxing and freestyling seemingly completely off the cuff. It’s pure improv and pretty astonishing to watch. I’m assuming they’ve performed with each other enough times to know how they all work but nevertheless it’s an impressive feat and one that goes off pretty much impeccably.

The Dream Team features Bellatrix who has previously performed at Bella with the much missed (in my eyes at least) Disraeli and the Small Gods. As is the nature with any improvised music there’s a danger of straying into self-indulgence and they do skirt round the edges of it at times. Ultimately it’s an impressive performance and I’m intrigued to see what more they can do. (see pictures of them here)

The Darkness probably don’t need too much of an introduction, the glam rock purveyors of glittery cheese metal are in fine fettle and likely caused the BBC Alba production team to have a few piseagan with their flowery language. The performance was being broadcast live and I’m not sure how they were planning to deal with ‘Get Your Hands of my Woman Motherfucker’… I suspect a few old cailleachs in the Western Isles would have got a shock if they tuned in. As expected it’s pretty much a Greatest Hits set, the only exception being ‘Bells End..’ which caused a few grumbles. It’s August, so stop whingeing.

Justin Hawkins, who is is resplendent in a sparkly one piece leotard, thrusts, postures and writhes around the stage, still very much a man in his element. Pictures and plenty of the man him self can be seen here. The rest of the band are in equally good form, bassist Frankie Poullain’s afro becoming more magnificent every time I see it with Dan Hawkins as assured as ever on guitar. Rufus (son of Roger) Taylor is the new boy in the team and the drummer seems to have quickly settled in. Happily joining in with the theatrics and donning a fabric traffic cone hat that had been plucked from the grasp of a member of the audience.

Justin comments that he’d read an interview with Frankie where he said that he’d heard that, ‘The Tartan Heart is the heart that beats the loudest’. This is met with an appreciative roar from the Bella crowd before they rip into a thunderous version of, ‘One Way Ticket to Hell…and back’.

‘I Believe in a Thing Called Love’ is the penultimate song of the night and possibly as expected, it’s the one most people are here for. Disappointingly they leave in their droves before the final song of the night ‘Love on the Rocks’ which is a pity because it’s a damn good tune.

So a good start to the festival and a headline act that are going to be a hard one to follow over the next two days. Did The Darkness match that night in December a few years ago in the Ironworks? If I’m honest, not quite. They were very good tonight but there was something special in the air that back then and it was always going to be a tall order matching the atmosphere of a hot and sweaty Ironworks. However as headliners go, The Darkness started the festival with a bang (steady now) and a healthy dose of fun and straight up rawk.