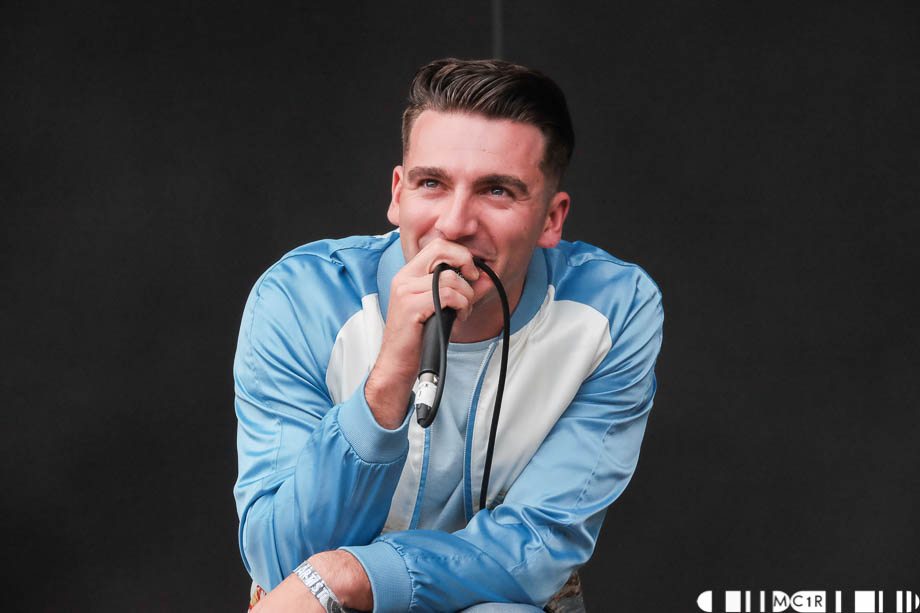 The grey shadow of clouds loomed as the queues formed to get access to the main arena of the garden stage to catch James Mackenzie and his band take open the second day of proceedings. It is an impressive draw for an opening act, we suspect that the relentless hard work that James is putting into to promoting his music is definitely paying off. Opening with ‘Your Eyes’ you definitely can’t argue with the pop folk stylings, especially impressive for the band’s first performance in four years.

It is a quick run up the hill to catch the last parts of Leanne Smith‘s set. She had of course been the first announcement for Belladrum 2016, having won Bella’s Got Talent last year. Her soft tones draw the audience close to her with ‘Precious Time’ whilst being crammed with emotion , it soothes the weary soul. Leanne oozes with potential, we look forward to seeing how she moves forward in her career.

Schnarff Schnarff are on top form from beginning to end. The platform being well tested by Jamie Douglas on drums, it might have wobbled, but it was certainly secure during the solos and the various jumping off and on that Myles and co. coordinated. “Urghhh” ends the set, and the crowd respond well. You can’t avoid the chatter of praise as the crowd exit the tent.

An act known for emotional intensity is Nieves,  “I think people are suprised when they meet us and we’re not utterly miserable!” said frontman Brendan Dafters in our interview with him last year. Their personality slips out between songs “Thanks for coming” he says, adding “even though it’s not raining”. Whilst they are purveyors of an indie melancholy they do not verge towards the self-indulgent, which is no mean feat. Catching them when they visit Inverness again on the 26th of August should be mandatory.

We stay in the Hot House stage for Sinderins, professional and talented to their core, a band that does not compromise commercialism for their own course. The band currently verge on psychedelic folk or modern atmospheric folk by their own definition, but we have no doubt that they could excel at any genre they choose. The McGinty led ‘Neon Cherry Blossom’ have us tapping our feet, not for the first time and certainly given the reception of the audience we are not the only ones to enjoy the Dundonians. Photos below.

Cards on the table our return to the Garden Stage sees us catch an IGigs favourite in The LaFontaines. No strangers to the festival or the area, with an impressive audience gathering for the mid afternoon slot. Whilst the smoke machine was used, perhaps to create a little more atmosphere, none was needed. The audience bounced, sang and chanted throughout. This was how festival performances should be done, more than capably led by Kerr Okan.

Will The LaFontaines ever headline Belladrum? Hell yes, the only question is when.

The rush to the other side of the festival to catch Mt. Doubt was hectic, on the way we caught a girl doing a handstand against Mother’s Ruin. Why? Because it’s Bella I guess.

I reached the tent midway through ‘Afterglow’ the addictive tune with sweeping choruses is typical of Leo Bargery’s work. He has collected together musicians to help communicate his vision creating quite a soundscape. Not for the first time the vocals are enchanting with Annie Booth complimenting Bargery’s lead vocals well.

I couldn’t resist a visit to the Tomatin stage where Belladrum staff are expertly trying to chaperone Torridon off the purely acoustic stage and get The Lafontaines on. It’s packed and it is worth every squeeze and push to see the band have a bit of fun, even revisiting the “Cannae get yer granny af the drugs” tune that had gone viral.

Once well known for being a great band, now well known for being on the telly for being a great band, Bombskare had the unenviable task of getting folk to ignore the shower. For the fans , “here we are back again our friends “Scott McCafferty said welcoming the audience. They did a good job as always, an inflatable dolphin down the front was particularly enjoying both the rain and the dancing. (See images of the set here)

One last walk to The Seedlings stage sees Vic Galloway introduce The Miracle Glass Company. Three singer song writers, each taking their turn to lead and you know with that concept you think about how the identity of the band might be challenged, but it works and works well. There’s a feel good vibe that comes with the band, and when Vic Galloway returns he describes it as “a fucking masterclass”. We’re not going to disagree.

Tenth band on my list is Alabama 3 and the wheels comes off. It’s rammed even a seat outside with a wee glint of the stage is untenable. A band we have seen several times before, but one whose festival performances are legendary. More than a bit dejected we hope for better luck , and better planning, for the next day.

It’s certainly been an emotional day roll on Saturday..