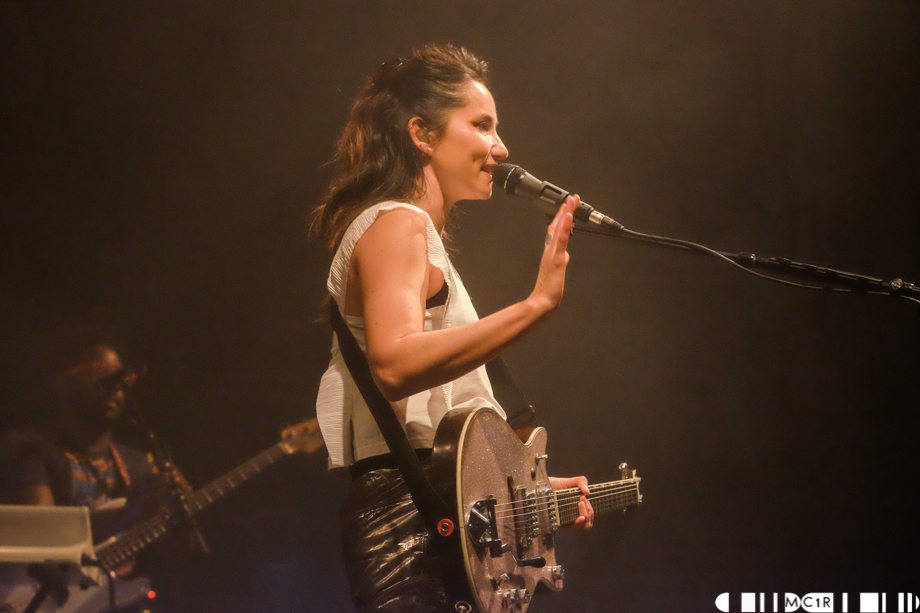 KT Tunstall, with support from Callum Beattie, at Ironworks, Inverness on the 26th of August, 2016. Review.

A big crowd had been drawn by the appearance of KT Tunstall, so much so that support slot Callum Beattie momentarily thought that the was in Aberdeen. Quickly corrected he never let this knock him off his stride. With his distinctively Scottish accent coming through in his vocal he exuded confidence in his rapport with the audience yet there was a sincerity to his delivery. He won the busy crowd over with songs such as the fine ‘Some Heroes Don’t Wear Capes’ and the tilting towards Aztec Camera ‘EasterRoad’. A fine opening set from a young man who you can find on Facebook, Twitter and Instagram. Oh and Tinder apparently ladies…

What was noticeable was the large crowd that had gathered early was eager for the arrival of KT Tunstall. The incidental music between acts stepped up a notch with Tame Impala’s ‘Let It Happen’ and the heavy beats were the overture for KT’s appearance on stage. For those expecting a show they got one. KT doesn’t just knock out the songs she also takes time to interact with the audience. Very much like Lucy Spraggan did at Belladrum. She has a connection with her audience which is through both loyalty and endearment. She understands them and they understand her which leads to a genuine bonding between stage and floor. This amplifies itself throughout the set as even the newbies are welcomed to the ‘cult’!

It had been an interesting tour of the north for KT with many unintentional highlights, whether it be near decapitation by kazoo (my exaggeration) or the kidnapping of tambo (no exaggeration) but (one of) tonight’s highlight and exclusive was an appearance by Julie Fowlis on a cover of State Trooper by Bruce Springsteen from his Nebraska album. Totally unexpected and totally appreciated. A couple of other covers were slipped in and KT had them Walking like Egyptians and marching like a Seven Nation Army.

The night had just about everything: the past, most notably by the encore performance of Suddenly I See, the future in the rockier harder edges of her new material and the mass swaying of arms and mobile phones to ‘Other Side Of The World’.

Photos of the evening can be seen here.