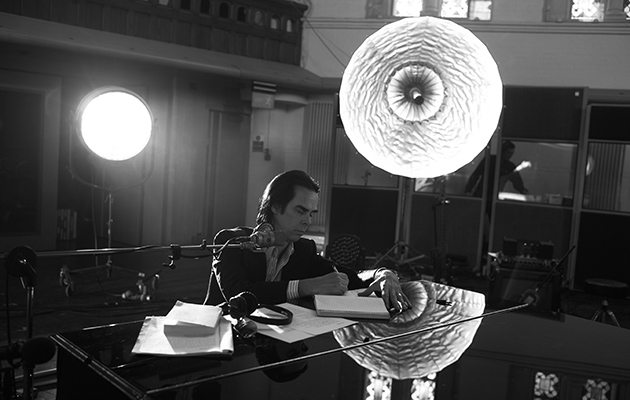 It was a near-packed cinema in Eden Court last Thursday that came to witness the one-night only showing of this very unique documentary about the new Nick Cave and the Bad Seeds album, Skeleton Tree. It’s unique because it is framed around the accidental death of Cave’s 15-year-old son, Arthur, who died in a Brighton cliff fall last summer.

The film, made by Chopper’s Andrew Dominik, is both a tribute to the boy who died and the incredible willpower of Cave, his ever-supportive band and his wife, Suzie Bicks, to transcend such a devastating experience. Instead of going through the usual slog of promotional interviews, this film *is* the interview, and more so.

Where we might be used to a live studio session to help promote an album, this monochrome film goes much further into ruminations about life, death, irrevocable change and loss. In turns, it shows the new songs (which pick up stylistically from the Bad Seeds’ last album), and combines candid interviews and beautiful camerawork to record scenes of humans gently supporting each other after a sudden death. What’s more, it deconstructs itself while running, so we know there is a crew all around the band. Out-takes are a part of the narrative; conveying the sense that nothing is perfect, nothing is finished and it can all go wrong at any time.

I can’t lie: the film is a harrowing experience. But for an insight into how an artist can literally work through one of life’s worst losses, it is enriching, soulful and ultimately inspiring. As Suzie Bicks says toward the end, “we decided to be happy”. This is a message then: we can choose how we shall be in this often cruel and indifferent world.