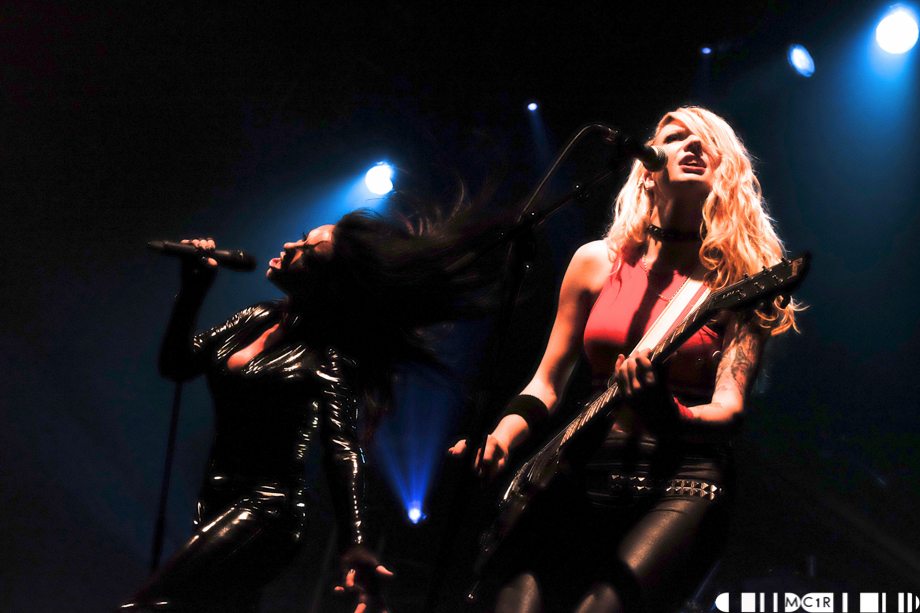 Sex Pissed Dolls, with support from Sam and Davy Cowan, at The Ironworks, Inverness on the 15th of October, 2016. Review.

Arriving in time to catch the last few songs of Sam and Davy Cowan confirmed in my mind why it’s so important to give the support acts some of your time. The duo of Davy Cowan and his son Sam belt out a set of punk and new wave classics and go down an absolute storm. Sam is in his early teens (I think! I’m not a good judge of age) and if he’s this good on the drums now, God knows how good he’ll be when he’s approaching the age of some of the more venerable members of the audience!

More of this please

The dynamic between the two is wonderful to watch, even if I detect the hint of a teenage eye-roll from the younger Cowan at the elder Cowan’s antics on stage! I understand the original drummer Graham Hosie passed away recently but I think it’s safe to say his legacy is in a safe pair of hands with Sam. More of this please.

The Sex Pissed Dolls have been receiving rave reviews for their live shows and that alone was enough to pique my interest. Normally tribute/covers acts leave me cold and I usually avoid them at all costs. However the ‘Dolls are no mere tribute act, yes the majority of their tunes are covers, but the songs are delivered with a snarl, a growl and a healthy dose of venom to prove that the punk spirit is alive and well.

As expected there a few Sex Pistols tunes on the setlist; God Save the Queen, Pretty Vacant and EMI are pummeled by the band and reinvented with an energy that the Pistols themselves would surely have doffed a spittle-flecked cap to. Front-woman Nancy Doll snarls and spits the songs out and, during ‘Jilted John,’ sounds genuinely pissed off, managing to make the song’s protagonist sound like a pathetic has-been for whom she has nothing but utter contempt.

The movement on stage is constant and, despite the poor turnout, they play as if the venue is packed to the rafters. Nancy does comment on that and one point, demands we bring our friends the next time they visit. Additionally anyone daring to heckle should be advised that they’ll get chewed up, spat out and dealt with a curtly snapped ‘twat’.  The rest of the band, Kitty Vacant and Connie Rotter on guitar, Jilly Idol on Bass and Anna Key on drums, don’t leave the theatrics to Nancy either.

You can hear the passion the band have for it

It might look chaotic but the band are incredibly cohesive and clearly enjoy playing together. In particular Drummer Anna Key doesn’t stop grinning throughout the whole night and that comes through in the music. You can hear the passion the band have for it and that this clearly isn’t a cynical money-making nostalgia act. Vocally Nancy Doll manages to make Johnny Rotten sound like a pussycat in comparison and there’s hints of Jello Biafra here too. The band’s guitar sound also evokes the likes of the Dead Kennedys at times with their jagged edgy guitar tone.

We are treated to a few of their own songs during the night. Now normally when any covers band announces that they’re going to perform some of their own material my heart sinks. Often these bands are put together because their own song-writing skills are mediocre at best. Fortunately I have my words well and truly stuffed back down my throat as ‘Maniac’, ‘Shitty Old Town’ and ‘SciFi’ more than hold their own with the rest of the set. Typical of the songs that era, they’re three minute, short sharp punk rock tunes. ‘Shitty Old Town’ in particular is brilliant and sums up exactly how I used to feel growing up in Stornoway. I could have done with that tune on my walkman (showing my age!) as I ambled down Cromwell Street with my head down hating absolutely everyone.

The rest of the night is impossible to fault, it’s over an hour of breathless, relentless punk rock performed by a band who manage to cram all the best bits of the seventies and eighties while at the same time bringing in their own breath of fresh air.

Pictures of the night here.