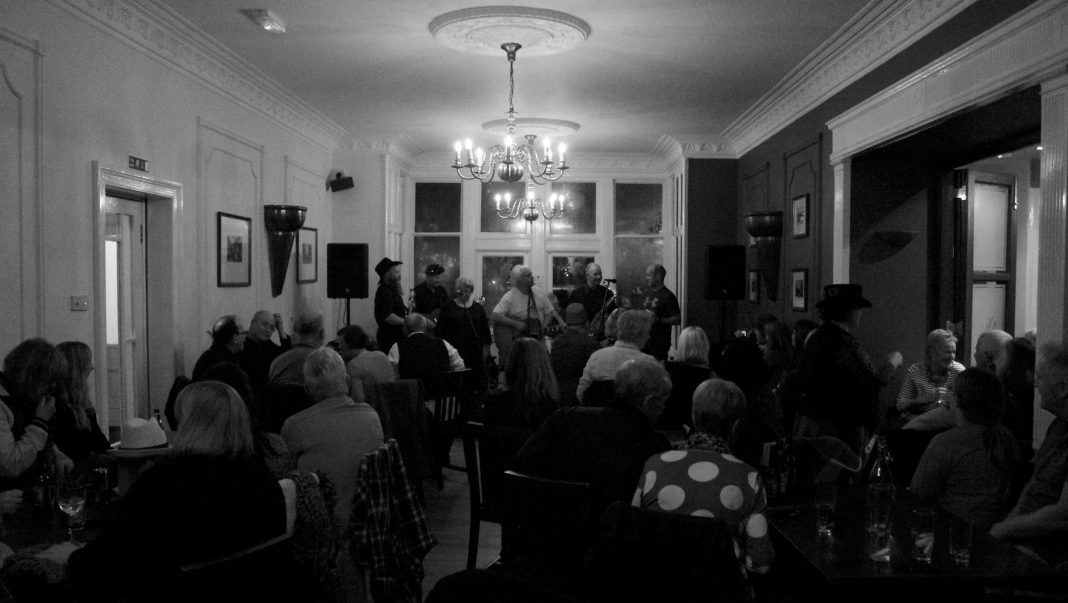 Dougie Burns and the Cadilacs, celebrating the launch of ‘Keep Your Mad Hat On’ at Glen Mhor Hotel, Inverness on the 4th of November, 2016. Review.

Dougie Burns and the Cadillacs brought their album launch to the Glen Mhor Hotel on Friday 4th November. My previous visits to this venue were for a Christmas lunch and a funeral so it appeared to be a little unusual choice of venue with there being a solid dividing wall down the centre of the venue.

I didn’t catch the opening acts but when the band struck up the section with the band became a little more crowded and intimate. The overall feeling was that of family and friends, a celebration you could say. The Cadillacs, fronted by Dougie are an engaging band who make blues very accessible. There was a real sense of fun and enjoyment throughout their set as they introduced their new album and some old favourites.

That fun and enjoyment extends to the interplay within the band and general camaraderie which makes a Cadillacs’ gig an immersive experience. Lesley Graham’s backing vocals act as a perfect foil for Dougie’s vocal and Ali Davies’ harmonica and James Younie’s sax weave through the set with freedom. Title track ‘Keep Your Mad Hat On’ in many ways sums up the band. In true party spirit hats were passed around through the band and beyond cementing the fun aspect of the performance. Enthusiasm extended to the very receptive audience and this was a prompt to edge the tables back and get the dancing into full flow.

The night though was about an album launch and on my return home I took the opportunity to give it a listen. When I did it all fell into place. The venue was really like a big house party and this is the overall feeling that the Iain McLaughlin produced album evokes. By the time you get to ‘Confidentially Wasted’ you can feel the drunken end of night waltz setting in. At six tracks it would appear initially to be on the short side but there is no filler on here and each track captures the essence of the Cadillacs. The overall vibe of the album was that of the atmosphere at the launch. Each track brought you back to the Glen Mhor Hotel. There is something quite old school about that feel and it’s a captured recording that gives the true flavour of the live act.

If I was hosting a house party with a live band, and a living room big enough to accommodate them, I’d be on the phone to Dougie.

For details on how to get hold of the album check out their Facebook page.

Catch some images from the night.