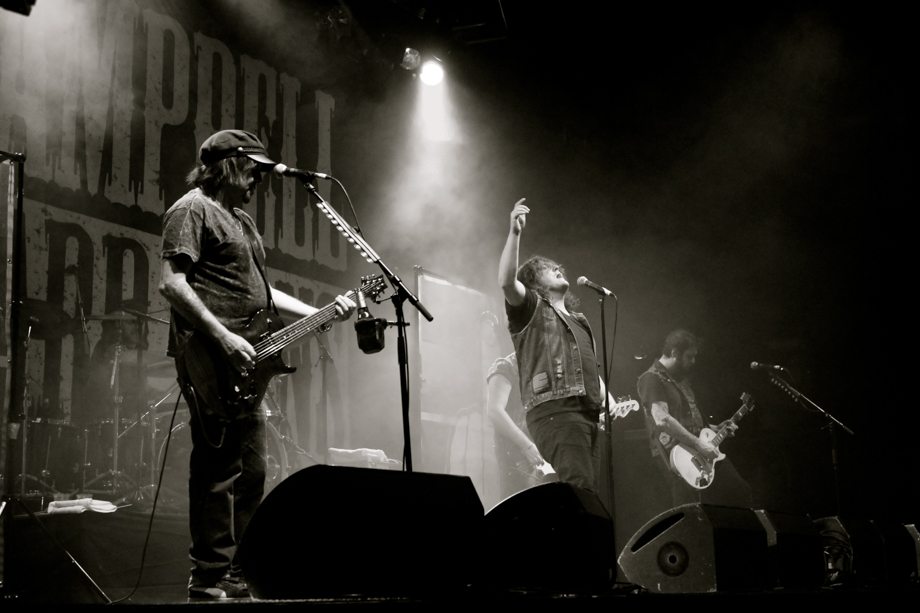 Phil Campbell and The Bastard Sons, with support from Fallen Riot and Devil’s Queen, at The Ironworks, Inverness on the 5th of November, 2016.

Inverness band Fallen Riot were the 1st support of two tonight Tight metal sounds from these guys . The short set was interesting and melodic in places with well thought out passages . Really liked them, would definitely go see them again .

Next up is the more, what I  would call, “metal but leaning toward traditional rock” sound of Devils Queen. (Is that a new category in the world of heavy rock?) They made an impression last time I saw them at the Spectrum Centre Night of Rawk last December they made a good energetic start and move quickly on to their 1st single “Paradox”. Great song.

This band put in a shift and singer Tom Coyne has all the moves, it’s a lot of fun to watch. He probably won’t like the comparison (very different style ) but on the right of the stage guitarist Mr McArthur is a dead ringer for 1970s era Rick Parfitt head down blonde hair hanging and just rocking !! Great gig guys.

Phil Campbell, his three sons on Bass, guitar and drums along with singer Neil Starr start with Big Mouth and the plough into a song called Spiders from the new forthcoming album5 songs in and we get our first Motörhead song then another with Campbell co-written Orgasmatron.

There is no reinvention of the wheel going on here. What we get is honest straightforward rock . No pretence, no posturing, no mid Atlantic accent, just a proper racket!

Covers of ZZTop’s Sharp Dressed Man and Black Sabbath’s Sweet Leaf are good choices  before ripping into TheAce of Spades, Eat the Rich and Hawkwind classic Silvermachine to finish.The band leave triumphant to return shortly after and encore with Going to Brazil, Rock out and Bowie’s Heroes , poignantly dedicated by Phil Campbell to all of those we have lost recently.

Then in true Motörhead laugh at it all even in the face of it they end the night proper with the classic Killed By Death.

What a great night out !

See our photos of the evening here.