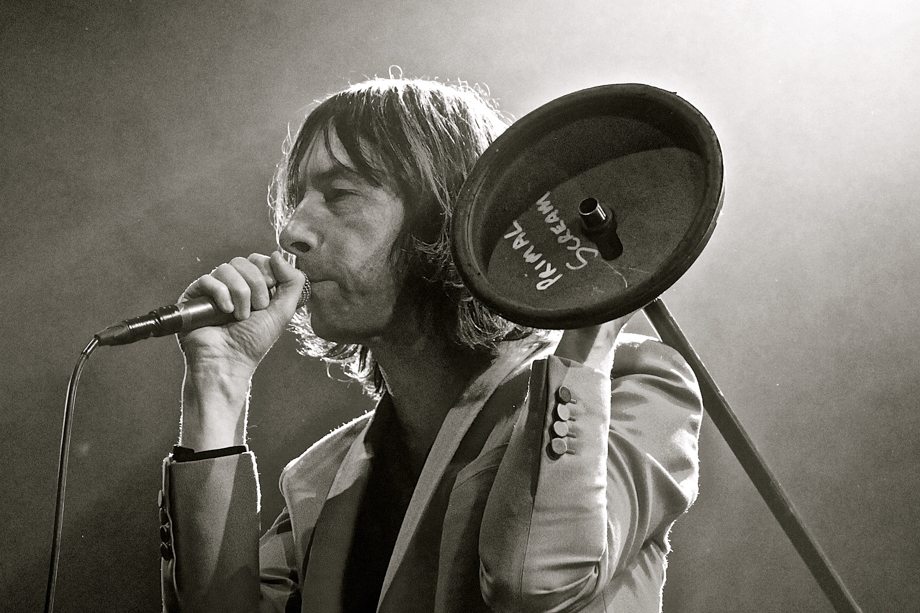 Primal Scream, with support from Bo Ningen at Ironworks, Inverness on the 22nd of November, 2016. Review and Photographs.

Support for tonight Bo Ningen arrive on stage unannounced looking like a group of Druids dressed in black with long black hair combed forward covering their faces. It’s a striking look and the metronomic music which ensues fits the look entirely. Hailing from Japan this is “acid rock” most definitely influenced by the nineteen seventies.

The fantastic drumming of Monchan Monna holds the whole thing together and the theatrics of bass player and singer Taigen Kawabe make this band really entertaining. As for influences, I definitely heard Les Zeppelin’s ‘Communication Breakdown ‘in the second song and early Black Sabbath elsewhere. Bubbling under but definitely there, great band.

Primal Scream hit the stage and  get stuck right into their hits . The band are tight and the sound is loud, the stage lit by a backdrop of neon lights and white spots and strobes.

This is a band which has been touring for years. Whilst they are delivering what the punters want, one can’t help get the feeling this is just one more gig in one more town and there is no air of the ‘special event’ coming across in the performance. I have never seen them before, and it may just be his usual demeanour, but singer Bobby Gillespie looks positively bored. That said it would be my only criticism as, although I’ve not seen them play before, I actually have lots of Primal Scream music in my collection and the hits do keep coming and the crowd are enraptured!

Third song in and we are already on to Stonesy ‘Jailbird’ followed by the full on racket of ‘Accelerator’ from the Album XTRMNTR the the ballad ‘Cry Myself Blind’. A wide variation of styles here all underpinned with the trippy vibe of songs like ‘Higher than the Sun’ and ‘Loaded’. Slotting easily into the well known hits are new songs ‘Tripping on your love’ and ‘100% or Nothing’ from 2016’s Chaosmosis album.

So there you have it a crowd pleaser of a gig and everybody left happy having got what they came for . Half way through the night Bobby Gillespie actually loosened up a bit and seemed to enjoy himself. The support were great, the headliners were great . It was a good night out  on a Wednesday in Inverness. Can’t be a bad thing.

Many thanks to Sarah Burns for the images.

You can see more images of the night here.