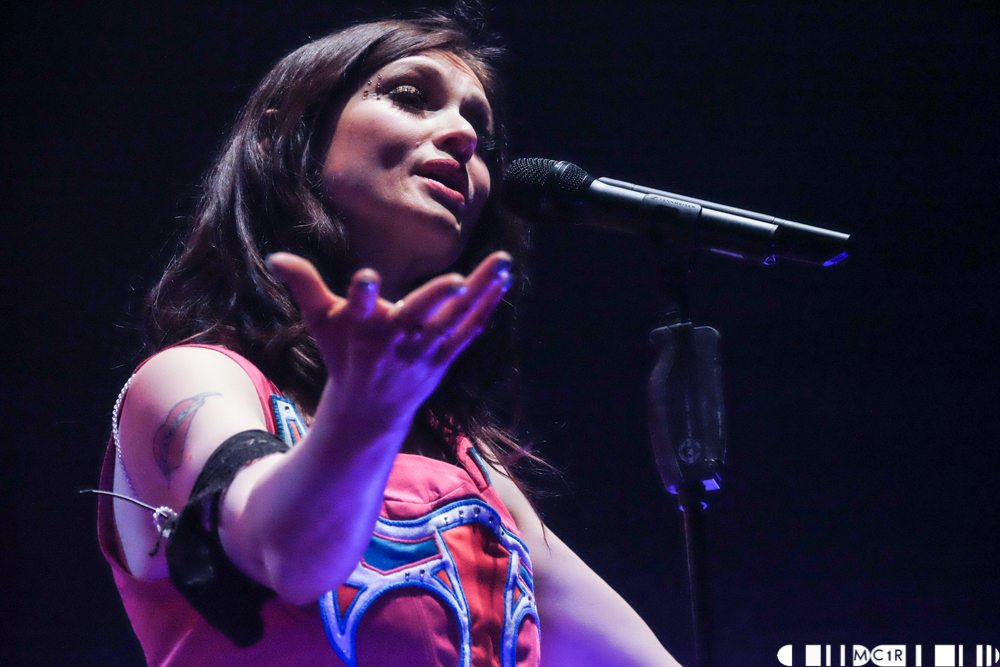 Storm Doris was beginning to show herself to Inverness on Tuesday, which was duly noted by Sophie Ellis-Bextor after her first two songs. “Beautiful place,” she said. “But the weather is pants, innit? So let’s forget about the outside world and make it beautiful in this lovely venue.” And you know what? She did. Queen Sophie and her magic live band, which featured two violin players, managed to make the assembled crowd get well into a gig which covered her whole (whisper it) 17-year solo career.

Following an intriguing set from London rock-electronica trio, Lock, Sophie opened with Wild Forever from her new album Familia, the title of which was also stitched on her short skirt across her derriere (just in case you missed the reason for her tour).

See, Sophie Ellis-Bextor showed not only can she cut a rug in tottering high heels, but has diversified her output far beyond her 2000 disco debut Groovejet (if this ain’t love). Her last two albums, co-written with Ed Harcourt, have a more earthy, narrative-driven influence that lyrically are miles apart from her disco hits. I mean, she even has a new waltz number (don’t laugh) which could’ve been stolen from the Tom Waits songbook. Which is no bad thing. But then again, despite her elegant disco sheen, Sophie’s always been a bit of rock chick, having spent her early career in indie rock bands.

“We had a walk around town today,” she told us and let us know she even learned the Gaelic words for yellow jumper, which was an uncommon and warm touch for a Londoner far from home. See, Sophie looks glam with endless legs and voguish poses, but I reckon there’s a little gothic heart in her that’s coming out more and more, especially with songs like the intense 13 Little Dolls and the foreboding new song, Cassandra.

What’s this now? An acoustic set? Thought that was tres passe but no, Sophie can pull it off too, as she runs through a couple of song snippets, including Take Me Home.

There’s one quick wardrobe change and Sophie comes out in a bright yellow babydoll dress and then the geansai buithe reference makes sense. She laughs it all off and warns the audience that it is now disco time, the band kicking off into an extended medley of her own and other’s hits (including Moloko’s Sing It Back). The Inverness crowd mostly got into it, but one couldn’t help imagining that you’d really get the best vibe seeing the show in San Francisco or Berlin, if you get what I mean.

Still, Sophie’s a pro and pumped out the hits up till a rousing finish with Murder On The Dancefloor and left the stage, only to suddenly reappear on the Ironworks’ balcony with her guitarist and violin duo to perform completely acoustic. Impressive and tireless. And I didn’t even mention those cheekbones. Timeless. She’d rock Belladrum, you know. Just sayin’.

Images of the night can be found here.