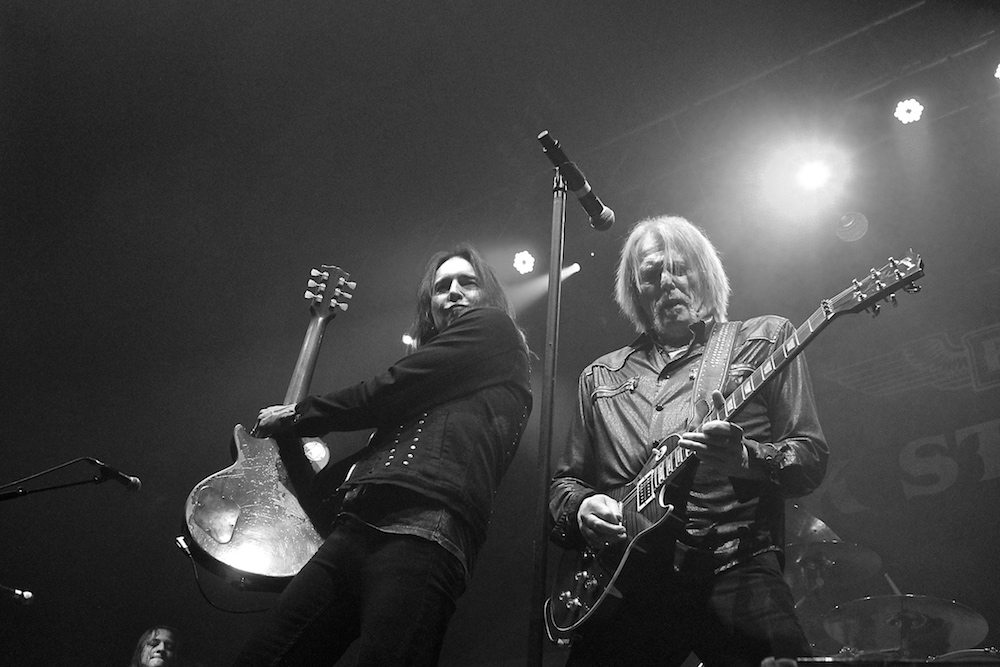 Black Star Riders with support from Gun and The Amorettes, Ironworks, Inverness.

A wonderfully noisy start to the evening with a thunderous entrance from The Amorettes. A fairly recent group from beautiful Scotland which always seems welcome in local venues. Their sound may be a little bit of an acquired taste, similar to Girlschool I’d say, with a whole lot of metal lady attitude. Heavy, dirty bass sounds by Heather McKay, aggressive hot and heavy vocals from Gill Montgomery and some pretty epic drumming courtesy of Hannah McKay.

A very powerful group of three however the look and attitude may take a little from the music experience. More trying to prove girls can do it too than showing they can play as a heavy rock/metal trio. Their songs had slight similarities to heavier Thin Lizzy numbers which is unsurprising as BSR frontman Ricky Warwick has had a bit of song writing input with the bands most recent album. All in all a listenable band for those who want some big noise in their life. Personally, I’ll stick with the boys who have been at if for a decade or two more with less to prove. Photos of The Amorettes from the night can be seen here.

Gun are in fine fettle and the energy they’ve brought to the Highlands in their previous recent visits shows no sign of waning. Despite lineup changes over the years and a dreaded ‘indefinite hiatus’ the band show no signs of playing the nostalgia card. There’s a new album on the horizon and lead track ‘She Knows’ sounds like the rest of the record is a promising prospect to look forward to. They’ve got an impressive repertoire in their back catalogue and the old hits come in thick and fast.

Of course the older material does steal the show and ‘Steal Your Fire’ is a proper slab of cock-rock that’s delivered with all the swagger (sorry!) that you’d expect from the Glasgow rockers. ‘Word Up’ is still utterly brilliant, it might be a cover but they made it their own way back when it was first released and of course everyone knows all the words. Likewise their cheeky cover of the Beastie Boy’s ‘Fight for Your Right’ is nicely done. They don’t take themselves seriously and you can forgive them for indulging themselves… and the crowd lap it up anyway. Photos of Gun from the night can be seen here.

The wall of Marshall amps across the back of the stage is unveiled and the Black Star Riders make their entrance. It’s a real privilege to see one of the originators of the twin lead guitar on stage. Without Scott Gorham, Brian Robertson and Thin Lizzy, bands like Iron Maiden would likely sound quite different today. I have to admit I’m a little in awe of the figure of Gorham on stage, as a guitarist I can only dream of playing anywhere near to his standard.

Plenty of tracks from ‘Heavy Fire’ get an airing, indeed the title track opens the show. It’s also plain to hear why Ricky Warwick was chosen as the frontman for the last incarnation of Thin Lizzy before they went on to become Black Star Riders. There’s definitely a few similarities with Lynott which is no more evident than during ‘Boys are Back in Town’. The former frontman of The Almighty throws devil horns without a trace of irony and revels in his role as the frontman of a band with an impressive pedigree.

As you might expect, musically there’s not a whole lot of difference between the sound of Thin Lizzy and BSR. It’s a slightly heavier edge to it but you could easily see Lynott and Co’ performing the likes of ‘Dancing With the Wrong Girl’ back in the early days of the band and the Celtic tones in Gorham’s guitar playing is easy to pick out. ‘When the Night Comes In’ is full of bluster and has a chest beating rhythm that you could imagine strutting down the street to while plugged into your iDevicepod.

So… here we have a band who seemingly do take themselves very seriously and they’ve clearly earned that right, but sometimes it’s a little too polished for my tastes. The songs are great and they’re obviously masters of their craft, but it’s missing something. Where Gun are full of life and obviously having the time of their lives, BSR seem to be a little lacklustre.

It would be unfair to say they’re merely going through the motions –  they’re obviously putting total effort into it – but at times it does feel forced. It’s a good gig but I expected more, possibly expecting to be blown away rather than slightly nonplussed and I’ll admit it was a struggle to stay for the whole gig. A good gig but on this evening’s performance not a band I would be in a hurry and go see again. Photos of Black Star Riders from the night can be seen here.

Thanks to Sarah Burns for her look at The Amorettes.