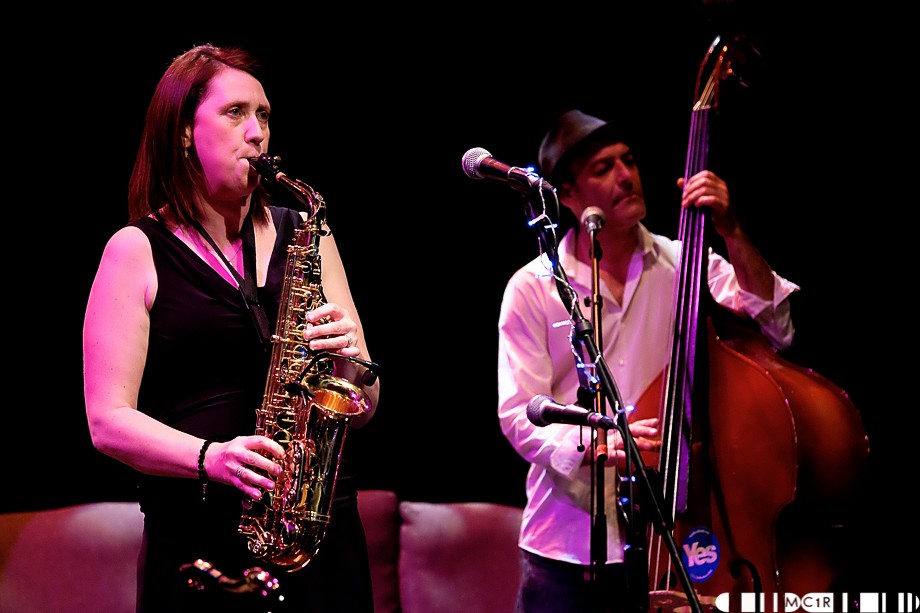 This was a gig eagerly anticipated by the band’s legion of fans. Their live shows had been kept to a minimum over the last few months in preparation for this one.

There was a nice buzz in the theatre and the audience was really quite relaxed. The stage setting of a living room with soft lighting was probably a contributory factor.Quite an appropriate setting, really, as all the band rehearsals since their beginnings in 2011 have been held in the living room of Donnie and Bev Fraser.

The line up for tonight was Liza Mulholland (piano, accordion and vocals), Maryann Frew (guitar and vocals), Bev Fraser (saxes, flute and vocals). Imke Henderson, normally cellist and vocals is meantime on maternity leave with her second child.

It was to be an evening of well loved originals, one or two classic covers and five, yes 5 brand new songs.

They kicked off with I Don’t Want to See quickly followed by All of a Dream and Don’t Give Up. Next up was the first of the new songs, What I Want. The audience was now well and truly in a happy place. They carried on with, Destiny and When You Said.

A Donovan classic from 1965, Colours, was song number 8. This reviewer was very chuffed when it was dedicated to him and his wife, Lynne, who have been fans since the beginning. Another new song, Love You, required some audience participation in the form of humming and everyone was delighted to take part in the performance. It also saw Derek come from behind the drums and play some guitar accompaniment. This concluded the first set and gave everyone in the audience a chance to catch their breath and discuss the show so far and how difficult it was not to get up and dance.

The second set started off with Looks Like Losing, again with Derek on guitar. Liza then proceeded to tell everyone that although they had been classed as a ‘Girl Band’ they have a combined total of 9 children between them. A nice way of introducing the next song, Antonia, written for Imke’s first child. You Got Me, another popular favourite , next and then the 3rd of the new songs of the evening, When Next You See Me. The time spent not gigging has obviously not been wasted.

Flightless Bird and the ever popular Liquid Lunch, a Caro Emerald cover made way for yet another new song, One Day. Time for the ladies to relax now and they took to the sofa to the rear of the stage. While they enjoyed this wee break, Robin took centre stage and entertained everyone with I Like to Lie which he introduced with a disclaimer, saying that it was purely fictitious and not based on fact.

The ladies came back with the title track of their debut album, Listen and when the applause died down, Bev introduced another new song, Stoopid. Apparantly this one came about after Bev and her husband, Donnie had a chat with a couple of tramps in Nashville. Robin took over lead vocals on this one too stating he wasn’t sure why he was chosen for this particular track.

This concluded the second set and they all took to centre stage for a group bow to thunderous applause.

They had one more treat for the audience. A cover of an Elvis Presley recording, Can’t Help Falling in Love. Maryann’s voice sent shivers up and down my spine. Her voice was absolutely sublime and the audience loved it.

A night of fabulous musicianship, great lyrics, beautiful harmonies, a fair bit of laughter and maybe even a few tears. What more can you ask for? Well, possibly that they get back to the recording studio. That second album is just waiting to be done.

Thank you, ladies and gentlemen, for a memorable evening.