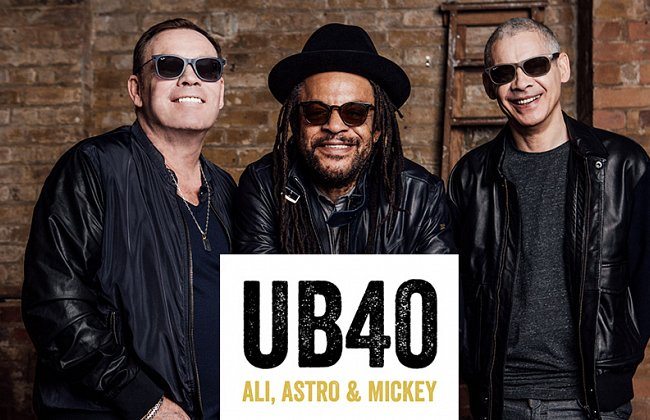 Inverness Northern Meeting Park is such a fine spot in the early summer, with big big trees lush with leaves, the Eden Court overlooking it, houses with balconiesrunning along it, Tomnihurich rising to the west, and a bunch of reggae funk bands playing under a greying Highland sky, missing our hottest spell this year by mere days.

Nonetheless, the first date of the UB40’s Grandslam Tour got off to a fine classic reggae start with new dreads on the block, Raging Fyah. Yes, say it and see. Geddit? Actually, this Kingston, Jamaica 5-piece has been burning since 2006, and led by the powerful vocals of Kumar “Kumz” Bent, Raging Fyah’s original grooves and soaring melodies flowed into the Meeting Park, echoing off the elegant seating stand and the church beyond the trees. Definitely a good choice to open the proceedings – old school fans will dig their style but the Fyah has real 21st century grit in the smoothness.

Where to start with the Original Wailers? I guess my perception is tainted because at this point, the crowd was beginning to fill and I ran into some friends, who were slightly roasted. Once they heard I was a reviewer in the field they demanded I report that they were not impressed with the band and were “raging” that the band playing were not, as advertised, the “Original Wailers”. Ah er um yes well they did have Al Anderson who played in the Wailers 1975-1980. Al did play great licks over some Bob Marley classics but then the band stopped after what seemed only 4 or 5 songs. My friends were puzzled by the short set.

Level 42 took the stage opening with Heaven In My Hands and thereafter sticking mostly to their 1984-88 heyday. And no bad thing, cos some of their grooves, be they Love Games or the awesome Hot Water, are seriously funky tracks. This reviewer must confess to a teen flirtation with Level 42 and their pop-funk ways. Big shout out to the ever-youthful Mike Lindup, whose trademark falsettos are still ball-squeezingly intact. Mike even came around from his keyboards to cajole up the crowd, but it was perhaps a tad over-expectant from the still-smallish numbers. Undeterred, the cheery-faced Lindup skipped back to his keyboard throne for the Lessons In Love bridge part. “When will you ever learn…?”

Dancing and blethering between songs, one thing myself and now-carnaged friends agreed upon was that no one has ever said: “Hey baby, let’s put on some Level 42 and make love sweet love…” Because this could NEVER happen. While groovy as hell, the light poppy sprinklings preclude any hip grinding shenanigans. Still, it was great to hear the band let loose with horn section solos et al on Hot Water – still a signature tune. Cooking.

The crowd had swelled considerably by the time UB40 arrived with their sweet cover of Al Green’s Here I Am, which set the rest of the evening up for a swinging sing-a-long time. Cue plenty of hand clapping, arm-swaying and general concert fun. Ali and the lads pulled out all their aces along the way, bringing out another singer for I’ve Got You Babe, plus a couple of newer ones which were decent to sway to.

UB40 are slick soulful reggae and it was a slight pity we missed the 19ºC evenings of late. Still, from Friday’s show it shows the Grandslam Tour has sprung from a lush leafy Inverness. It rolls down the UK over 9 dates until August.