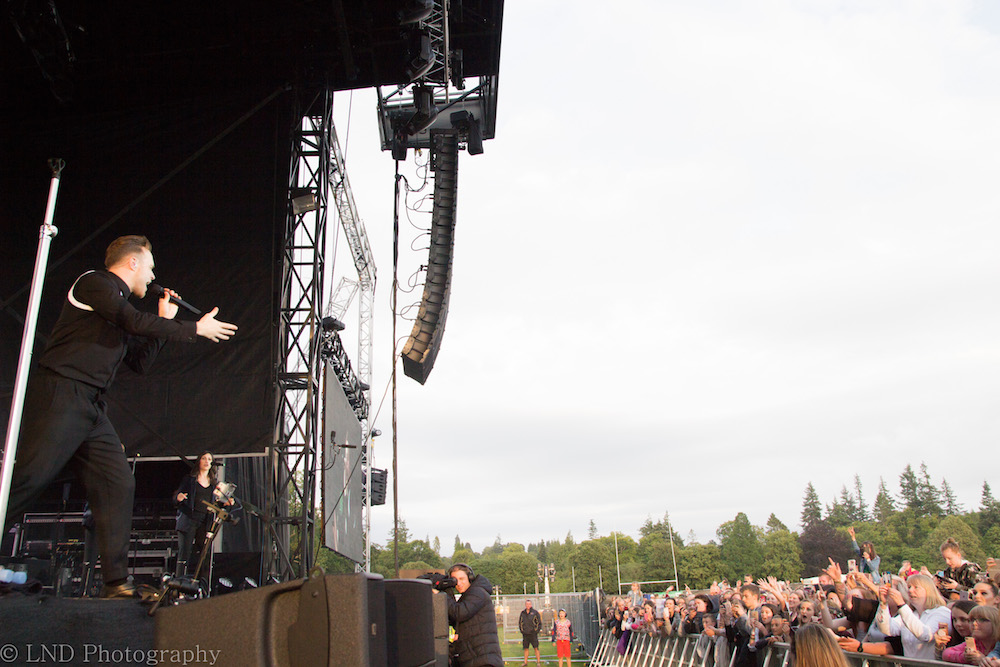 Olly Murs has been heard on the radio for many years since he reached the X Factor final back in 2009 and since then has performed in Inverness twice. On this occasion he was supported by Louisa Johnson who won the show back in 2015, she opened with her single ‘So Good’ and then continued to perform some of her well known songs and a cover of ‘Love Yourself’ (Justin Bieber) which warmed up the crowd.

The crowd, who consisted mostly of younger children and mums, were dancing away throughout her set and everyone seemed to be having a great time. Throw in some crowd interaction and dancing across the stage and you have the perfect support act for Olly.

Olly Murs himself opened with his song ‘You Don’t Know Love,’ this is one of his more recent songs and had a great reaction even if most of the crowd were mumbling the words as they weren’t quite imprinted in our brains yet! Murs’ poses at the end of each song were both hilarious and the perfect photo opportunity.

Murs proclaimed his love for the Scottish audience many times during the gig and before performing his song ‘Grow Up’ called out to the kids in the audience to tell the parents that they are the ones that should grow up. Murs also took some time to remind us of the love we should have towards each other following some of the recent events further south, this caused strangers to hug one another and a great, friendly atmosphere was created.

Bringing Louisa Johnson back on stage for their single ‘Unpredictable’ was definitely a crowd pleaser and set the crowd up for a real throwback to some of Olly Murs’ earlier songs. ‘Heart Skips a Beat,’ ‘Dear Darlin’,’ were just two of the songs which caused a massive sing along and got the crowd dancing.

Murs also covered many songs in his ten-minute slot which he allotted the time in which the audience goes crazy. Murs took us on a trip back through the 60’s, 70’s, 80’s, 90’s and the 2000’s, these covers earned a huge reaction especially from the older generation in the audience.

Olly Murs finished his set with the song ‘Years & Years,’ which was accompanied by a story from his love life. All in all, it was great family friendly gig, Murs’ cheesy dancing, sometimes falling under the category of ‘dad dancing’, and audience interaction made the night especially good. It was a good couple of hours full of the hits and everyone, bar the odd bored dad, seemed to really enjoy themselves!

Check out the photos of Olly Murs from his evening in Inverness.

Check out all things Olly Murs here. (Buying from the link supports the site).