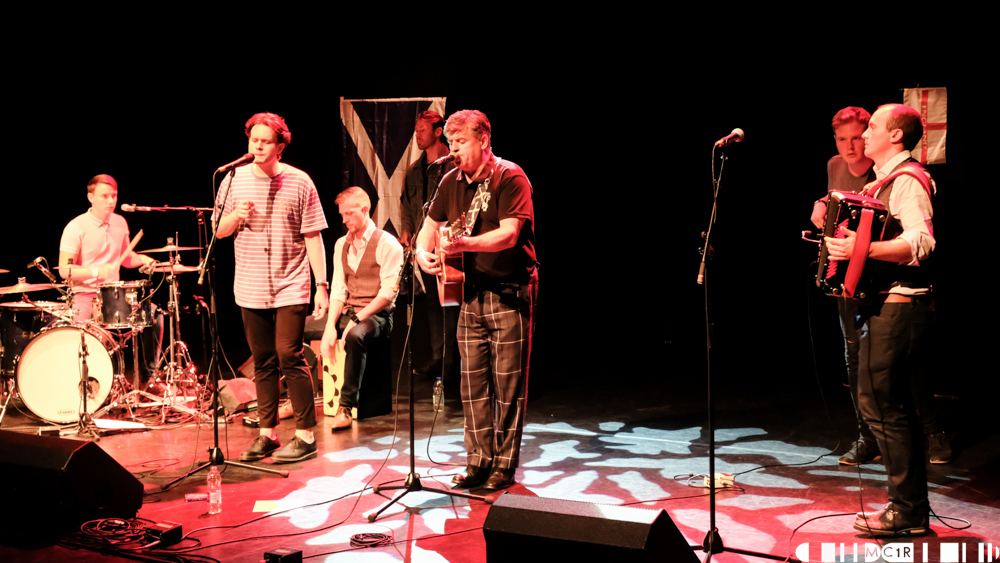 Schiehallion and The Luke Jackson Trio, at Eden Court, Inverness.

I have to be honest; I never thought that a four o’clock kick off on a Sunday afternoon at the One Touch Theatre would have been the most obvious scheduling for a gig. And yet, I pitch up to the gig and it’s close to sold out: testimony to the immense efforts of promoter Rossie Ross and the popularity of the two (very different) acts on this double bill.

First on stage were local heroes Schiehallion. Cast very much in the mould of a traditional Scottish folk/ceilidh band they clearly have a substantial and enthusiastic following. Consisting of Kenny Jamieson (vocals, guitar and bodhran) and Stuart Mackintosh others join them on stage as and when. This afternoon they have alongside them regular accomplice Calum MacGillivary on the big pipes and Cy Mutch on cajon – and what a really fine sound they produce.

Their self-penned songs (for example Travelling North and Scottish BBQ) sat seamlessly with more well known offers such as Caledonia and Flower of Scotland in a fine mix of dance tunes, ballads, story songs and of course a fair amount of humour. I was particularly impressed with the fact that they seemed to know most of their audience by voice alone as the banter between stage and an audience they couldn’t actually see flowed through the performance.

As alluded to above The Luke Jackson Trio are a very different proposition. Hailing from Canterbury Luke Jackson is a singer-songwriter who is clearly a massive talent: Rossie Ross is convinced Luke Jackson is on the cusp of a major breakthrough and I would have to agree. Offering up (mostly) self-penned folk/roots influenced songs there is also a flavour of the blues hanging around.

Accomplished guitar playing and a terrific voice he is well supported on bass and drums by his band-mates who also pitch in with fabulous harmonies. He is not afraid to strip it right back to a cappella – really letting his voice shine. His own arrangements feel fresh and constantly engaging and their one cover of the evening was Purple Rain – which they absolutely nailed. Seriously – check them out.

Now I had been alerted to the fact that the finale would be both bands playing together on stage and I could not figure out how that would spin out. I needn’t have worried. Both bands are fans of Richard Thomson and received a standing ovation for a wonderful rendition of Beeswing. All in, a truly remarkable and memorable gig.