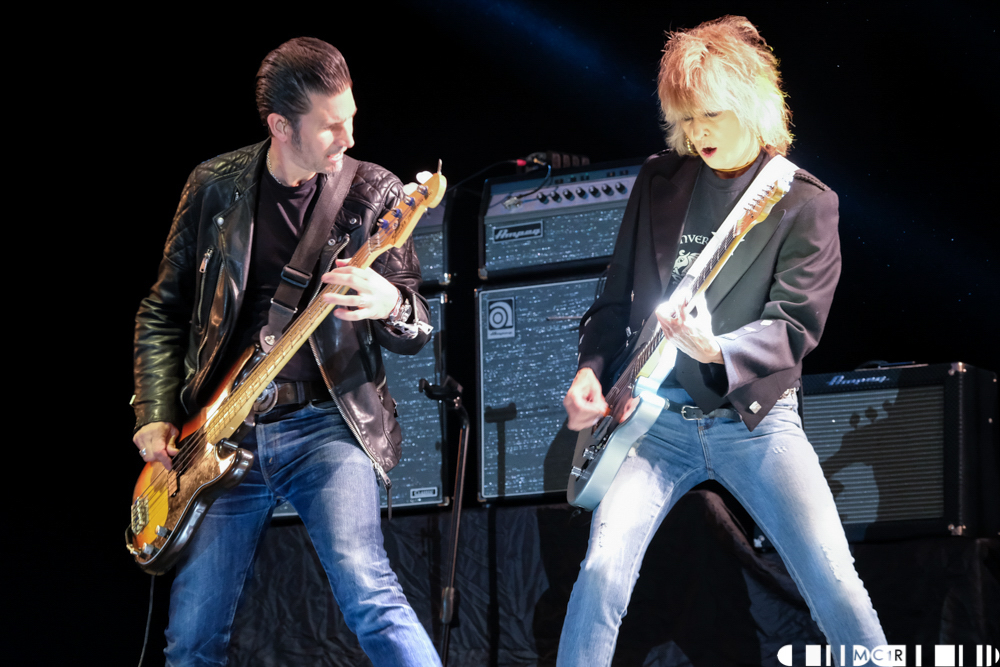 We look at The Pretenders, BooHooHoo, Baby Strange and more, at Belladrum 2017.

First act of the day is Baby Strange over in the Hothouse Stage, I’d heard a good amount of chatter about them and the general opinion seemed to be that they were ones to keep an eye out for. They bound out on to stage and to be honest that’s about it. They’ve obviously listened to a bit of Dead Kennedys and a wee bit of The Clash but for the most part they flit between pop and punk and all the bits in between, but really don’t do all that much else. A poor man’s Arctic Monkeys if you will.

Up on the Seedlings Stage Lilura , who we caught on her debut, is impressing with an emotive and passionate performance. Lorde comparisons might be a little too obvious but I think it’s a fair one to make, and that’s certainly not a negative criticism seeing as she pulls it off. The free temporary tattoos are a nice touch and the stash of alcohol that she uses to bribe the adults down to the front of stage is a clever move. Free booze…? Oh go on then.

Up till now I’ve missed Vukovi every time they’ve played up in this direction, but today I finally managed to see what all the fuss was about; they set the Hothouse Tent alight with a blaze of riffs and masterful showmanship from lead singer Janine. They are utterly impeccable and simply utterly fucking awesome.

The crowd were in the palm of their hands from the opening riffs and the even the cynical hangers on the back, mostly sheltering from the rain were won over. Giving away freebies seemed to be a bit of a theme this afternoon and they went one step further by firing beer tokens into the crowd using a plastic gun. ‘Queen’ Janine demanded she was given a novelty crown that was being worn by a member of the moshpit at the front of the stage and if I may be so bold, her Royal Majesty wore it rather well. The Queen is Dead, long live Vukovi.

By this point the going underfoot is beginning to get a wee bit more difficult with the rain continuing to pour down and the mud patches gaining in size. A sizable puddle near the Garden stage is entertaining a number of kids (and a fair few adults) fortunately for those wellies the puddle is prevented from turning into a Loch with the intervention of a few bucket loads of woodchip.

BooHooHoo are, despite what their name might imply, an absolute joy. They have a dancer along for the ride and his role is simply to do exactly that, dance his heart out. Think of Bez crossed with Ziggy Stardust-era Bowie and you’ll be half way there. It’s no gimmick either, whilst the dayglo lycra and tinsel wig is pretty in your face, his dance moves are superb and he matches the tempo of the band perfectly.

Without doubt @boohoohooband were as awesome as their dancer pic.twitter.com/lOA0S8XHIB

The band themselves play a mix of disco, rock and pop and their twenty minute set finishes far, far too quickly. It’s as if someone bunged the music of CSS and the B52s into a big pot, swirled it together and this was the end result. And there was a flute solo too. You really can’t go wrong with an honest to goodness flute solo. We had caught up with BooHooHoo prior to Bella, check out the interview.

Where BooHooHoo are bright and unironically zany, Noah Noah are straight down the middle rock and not all that far off what you’d be getting down at the main stage with Feeder who were playing at the same time. I have a lot of sympathy for acts who’re having to compete with the bigger beasts playing at the same time as them but I always feel it’s worth giving them at least a quick listen to see what they’ve got on offer. After all it’s not as if it’s a major hike to any of the other venues in Bella if you want to quickly check out what else is going on.

There’s enough catchy choruses and hooks here to keep my attention for the duration of their set and I came away very much liking their energy and song-writing. Sadly this was the last gig for their bassist but I got the impression it was far from the end of the road  (Absolutely, they talked about their future plans with us earlier in the week – Ed.)for the band, they certainly seem to have a lot to offer.

It’s not just all the big stages either, Jim Kennedy entertains a reasonably well oiled group in front of the Bella bar with renditions of Caledonia and 500 Miles and Dougie Burns is in fine form playing songs at not one but two stages; earlier in the afternoon at the Bella Bar and then again in the evening at the Potting Shed stage. I don’t often get a chance to stray too far from the ‘main’ stages/tents but it’s a nice reminder that there’s plenty to go at if you don’t fancy the sound of anything playing in towards the main arena.

Back to the main events and The Pretenders close Friday’s festivities at the Garden Stage with over an hour of classics and a couple of newer songs too. Chrissie Hynde sounds utterly flawless and her voice has an ageless quality that doesn’t falter for a second. She proudly sports an ‘Inverness, Scotland’ t-shirt that she bought from one of the tourist-tat shops in Inverness, brilliantly she’s completely unapologetic about it and even admits to visiting one of the heraldry shops to see if she can get anything for the Hynde ‘clan’. She also mentions visiting a Vegan restaurant even though, ‘all vegans and feminists hate me’ alluding to comments she reportedly made about being abused and the grief she got for saying she was at fault. Whether this is something that should be explored in a music review is possibly up for debate.

The set itself really is excellent and the highlight for me is ‘the song we wrote for Girls Aloud’, Stand By You. As rousing ballads go it is a class of it’s own. Heartfelt lyrics – check, singalong chorus – check, lighters aloft moments – check. ‘Back on the Chain Gang’ gets one of the biggest singalongs of the evening, although ‘Don’t Get Me Wrong’ gives it a run for its money. It’s when they decide to properly rock out that they really come into our own The Pretenders may be veterans of the music scene but there are zero signs here of a band that are playing for a paycheck and going through the motions. The energy on stage is superb and they quickly stick out as one of the best headliners to grace that stage in recent years, and that’s no snub to the other bands, they simply played their A game tonight.

WHAT HAVE YOU MISSED? All our other Belladrum 2017 interviews, reviews and photographs can be found here.

Did you catch our review of Thursday night?