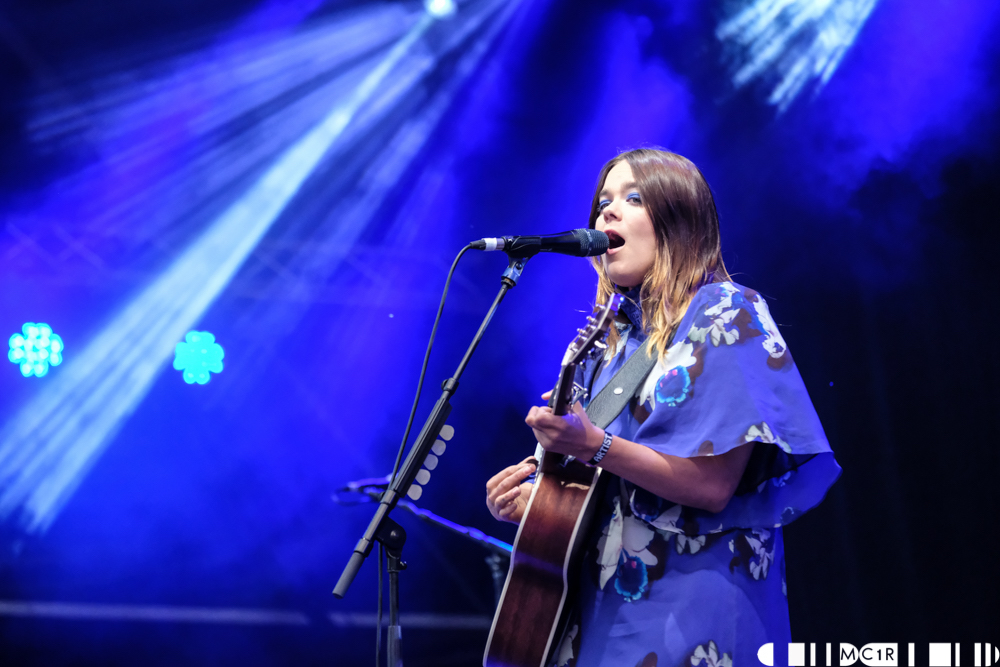 The ‘new’ Thursday format is still one that people are getting used to but it does seem to be one that is working. Even if it does bring about a certain degree of consternation from those onsite who don’t have a Thursday music ticket. Fortunately you can still get close enough to listen to the tunes even if you’re not quite in the thick of the action. The insistence on making everyone comply to a one-way system is fairly baffling though, I understand it makes lives easier for the Stewards in terms of checking wrist bands, but I would have thought that filtering the traffic across multiple entrances would at least prevent too many muddy paths from developing early on.

Liverpudlian Louis Berry is still relatively unknown round these parts but he still managed to draw a reasonable crowd of early evening punters to the Garden Stage. He quickly impressed me and a sizeable number of others who’d wandered down to the front of the stage, with a set of high octane rock music. He’s not short of charisma either and flits between being an engaging and quite humble frontman with ease. This down to earth attitude is reflected in the songs, there’s no pretension or navel gazing, just straight down the line rocknroll.

First Aid Kit are the perfect band for the Garden stage and they bring Belladrummers out in the droves. They’re a hugely popular draw and their summery folk tunes fit the Belladrum Summer of Love theme perfectly. What doesn’t necessarily come across in the albums though is the sheer verve and energy these two sisters have. In a live setting the songs take on an extra energy and life of their own and prove to be compelling listening. With a full backing band behind them this is no folksy twee act but a band that can rock out with the best of them. There’s a new album in the offing and I’m very much looking forward to hearing that when it comes out. They’re not afraid to fly their feminist credentials either, they’ve written a scathing song ‘You are the Problem Here’ about the lenient sentence a rapist received and they justifiably do not hold back,  ‘I hope you fucking suffer/ Do you really expect anyone to feel sorry that you ruined your own life/ You did it when you thought you had the right to put your entitled hands up her thighs’. They;’re unapologetic about it and their anger is palpable in the way the song is performed. These Lion’s have roared, best you listen.

Headliners Sister Sledge are one of those bands where you know the name but don’t think you know many of their songs. And then you’re surprised where not only do you know most of the songs but you know a good proportion of the lyrics too. Their Motown infused pop is the perfect close to Thursday night and whilst there’s the sad reminder that these three were a four not all that long ago, it doesn’t detract from what is a triumphant headline set. It’s a bright, shimmering, hugely fun end to the first night at Belladrum and sets the weekend up just for what could be a vintage year for the festival.

Check out our first look at Belladrum below;