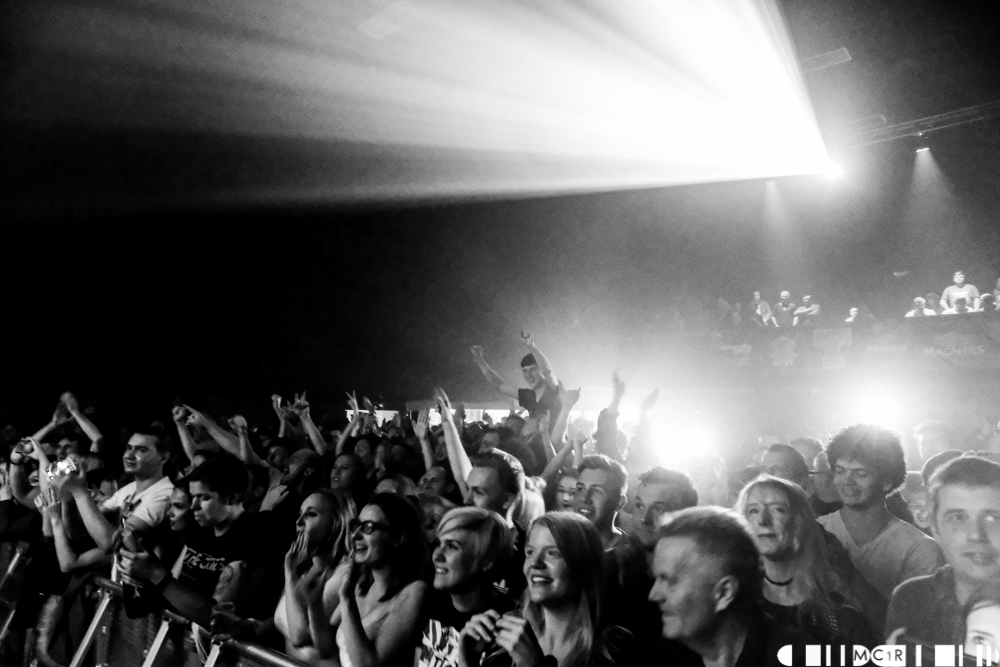 The Libertines, with support from Amy Jo Doh & The Spangles and The Skinner Brothers, at Ironworks Venue, Inverness.

It would easy to highlight the feuds and addiction issues the members of The Libertines have suffered since their inception but these problems have been documented enough so I’m not going to re-hash old ground in the coming article (I’ll leave that to the other boys and girls to do).  Instead I am going to tell you a hot and sweaty tale the like that has not been seen since that night I spent with the cast of Fraggle Rock of which I am legally forbidden to speak of.

Three bands were expected on the stage at the Ironworks from 7pm on Monday so my warming up began earlier than usual at 4pm.  Five pints of Blue Moon made sure I got in the proverbial groove as well as providing me with at least 2 of my 5 a day (you get a wee slice of orange with that you see?). 7pm came and off I zig-zagged to the Ironworks where many a 90’s kid were gearing up to relive their teenage care-free years before council tax and responsibility slid in to ruin their unabashed happiness.

By the time I had made my way through the obligatory security checks, The Skinner Brothers had swaggered onto the stage and begun the nights entertainment.  A quick skip to the bar and I was the ready for some action.  I hadn’t heard of the band before but they sure felt familiar.  The band may have the hair of The Kooks from days gone by, but they have a swagger and a sneer of the Arctic Monkeys before Turner disappeared up his own arse.  All this must have made the Skinner Bros an easy choice for support for a band like The Libertines.  The room was half full by this point and the band’s lad vibe was gobbled up by the half-cut revellers.  Camden had officially arrived in Academy Street and by the time the band smashed out their crowd-pleaser of a track ‘Chelsea Boy’ I was pickled and the room had been fully taken in by the Londoners.

The second band of the night was AmyJo Doh & The Spangles.  When I heard that the lead singer was none other than Pete Doherty’s sister, on a scale of 1-10, my cynicism level reached a high of ‘aye, very good’.  I was however pleasantly surprised. Dressed like a Shoreditch Cyndi Lauper she complimented the evening’s sound nicely and added a lighter touch to the Camden vibe being thrown about and even poured in some pop into the mix.  The band have some Youtube vids online and they are well worth a watch if you missed them on Monday.  You can almost touch the influence and connection between the Doherty sibling’s music but I still think that although Pete may be headlining, Amy is supporting on merit and not just on shameless nepotism.

Once Amy and the gang finished their set I briefly took a moment to look around and was struck by the realisation that the Ironworks was completely full!  Yes, Inverness had turned up in force to welcome The Libertines to Highland capital.  I go to many a gig in Inverness and I often have to describe the evening as “intimate” but thankfully I can report that the place was rammed with expectant fans, hoping for a glimpse at the resurrection of their favourite tortured garage-indie band.  Finally, The Libertines swaggered on and Pete immediately proclaimed something through his microphone but the reception for the band was such that he could not be heard above the cheering and roaring from the crowd and this roar did not stop for the entirety of the gig.

Highlights of the gig were always going to be when nostalgia was re-visited and the hits were played and played hard.  Songs like Up the Bracket and Can’t Stand Me Now were met with surges of movement from the crowd meaning that that the whole of the Ironworks had become one massive reeling mosh pit, slippery with sweat but not weighed down with any aggression despite the high concentration of taps aff and shit tattoos on show.  Being an old man now, it had been a long time since I had been partial to getting involved in such dynamism at gigs but I quickly got enveloped by the beast and it was either become part of it or die.  I had x amount of drinks by then so obviously the answer was to dive in and drown myself in the sweat of other bolder men just like dear ol’ Dad taught me.

‘Riotous’ was the word that kept coming to mind as I dutifully bounced along with the crowd.  This gig was north of 100 miles an hour and there was no chance of stopping for a pee and a filled roll anywhere.  The two singers would speak briefly in between songs but with the chants of “here we fuckin’ go” and the worry of my more-than erratic breathing, the offering from Pete and Carl fell well short of soaring above the racket.  The band tore through the set and left every man, woman and radge breathless in that room and left this radge with sore calves and a reluctant realisation that he hadn’t giving The Libertines enough credit for what they do all these years.  By the time the band smashed out a hectic cover of Harry Nilsson’s ‘Everybody’s Talkin’’ I had long forgotten about the headlines of bust ups, feuds and addictions and now I can say that they are much more than just tabloid titillation, but they are an honest-to-god band who can make me sweat more than Inner Circle claimed they ever could.  There is loads of life in this band and I’m curious to see how they move forward after this ‘sea-side’ tour is finished.  If they can manage to keep out of the tabloids and stay in the music mags (whoever is left) then they clearly have the song-writing chops to make a further dent in the musical landscape and I am pure on board with that.

Gigs like this are why I adore live music.  I think if you asked anyone about Monday night they would say it was a proper belter of a gig and one that will live large in the memory of Inverness for some time.

See photos of the gig;