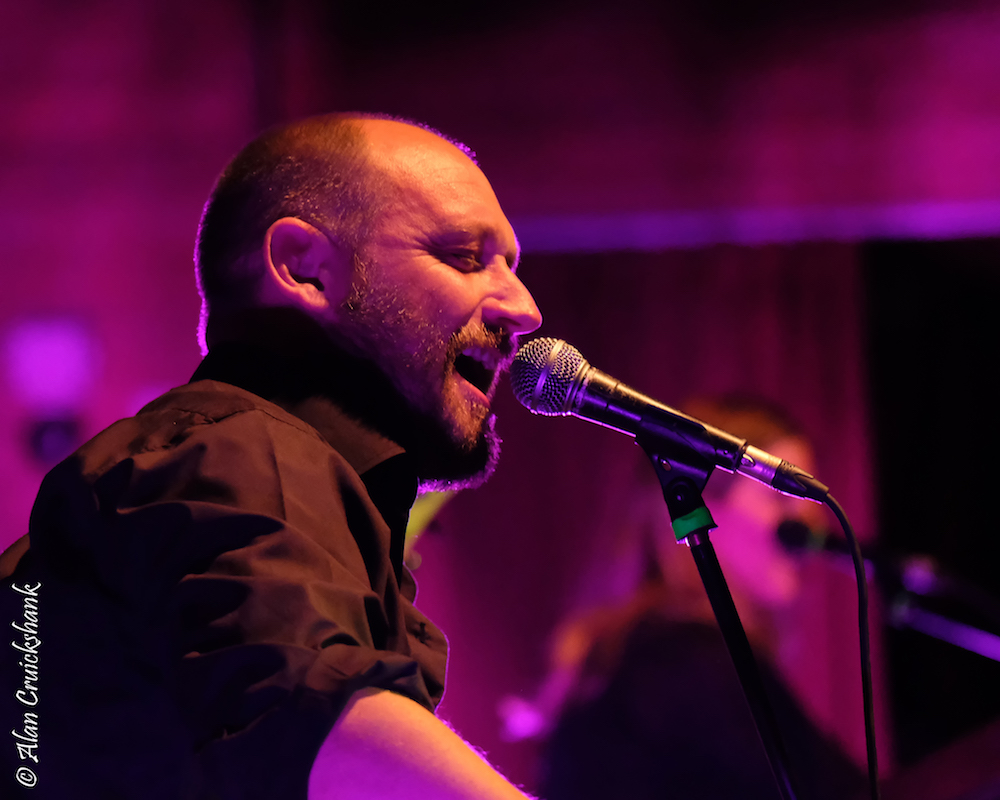 We have been to plenty of gigs in our time, but an extravaganza, well this was certainly a first. According to the Cambridge dictionary an extravaganza is “a large, exciting, and expensive event”, could the sold-out Edgar Road Extravaganza live up to expectation?

First impressions were a resounding yes, the Elgin City Hall, with it’s beautifully maintained but dates seventies decor contrasted with the decadent silent movie themed visuals projected on the draped curtains and walls. It would be amiss not to mention the real community feel to the event from the large turn out to the local suppliers promoting their wares including el:gin and Keith Brewery.

The first music of the night came from Keith based trio Gordon James and the Power who boast an array of pop soft rock tunes that have been honed over the past year. The hints of John Mackenzie’s vocals in the melodies give an added rugged edge. The pace ramps up near the end of the set and you can imagine how a full electric set could transform the tunes. In the meantime new material is promised by the trio soon, it will be well worth checking out.

The night is interspersed by the comedy of Halde Pottinger and his band of merry men from The Teuchter’s Comedy Club, it’s a mixed bag of laughs ranging from the standard fayre to material a bit too close to the bone. However it’s refreshing to see other entertainers on the bill and when the magician Dean Spruce enters the fray with mindreading and razor blade swallowing, it’s certainly emphasises that this is not your normal gig.

The Elgin Youth Chamber Orchestra played covers of Miss Jones and Something Stupid prior to Edgar Road joining them on stage,there is something about the majesty of an orchestra in the setting that is just splendid and ever so indulgent as per the vibe of the evening. The orchestra accompanies Edgar Road for the opening pair of songs of their set, and all too soon they are gone.

It’s hard to pinpoint the sound of Edgar Road, whilst the band quote Radiohead, Elbow, Coldplay and U2 as influences, it is a bit hard to see these immediately. Whilst I am not comfortable with the shoegazing genre, it is perhaps appropriate in this case.

What is obvious is that the band, even with temporary and rotating bass player , are a tight unit of established musician. Under the tutelage of front man Marc Conti they have the audience under their spell. Unsurprisingly the dance floor quickly becomes very busy.

Edgar Road are not lacking in ambition the tunes are complex constructions that play off the impressive drumming of Allan Hall and the keys of Magda “Maggie” Wellenger. The set calls on a mixture of material, calling on an impressive set list that would make more established bands jealous, although perhaps most significant is an opportunity to hear the majority of the new tracks which are being recorded in Leeds for the new EP in the next few days. ‘Olivia’ stands out, a new track written for Conti’s daughter, the poignancy of the lyrics that include “you find the world is yours” is not missed.

As a band they have hit all the right notes with a partisan crowd and with their national standing growing, it is particular interesting to see what is next for Edgar Road. But what is definite, an extravaganza was promised, and an extravaganza is what we certainly had.

See photos of the evening below;