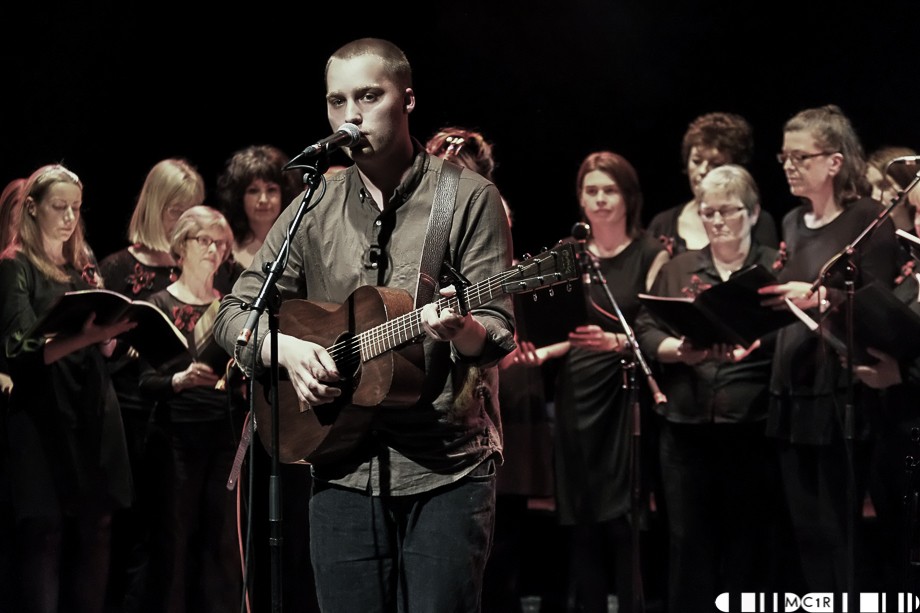 Ahead of their gig at Eden Court  in November,  Adam of Adam Holmes & the Embers chats to Toby Stainton of IGigs.

The Midnight Milk tour is billed as a showcase for the much-anticipated third album from Edinburgh outfit Adam Holmes & the Embers and is built around the themes of desire and reassurance.  “Around the time when I was formulating ideas for the new album I became interested in what impact an individual’s desires and yearnings have on their overall state of contentment. This resulted in the two main themes for Midnight Milk becoming desire and reassurance. I was keen to create a space within my music where I felt satisfied, complete and free of wanting and for the listener to feel this way too as they listened.”

“The concept is that Midnight Milk is whatever feeds you, appeases you, frees you of your desires and brings you contentment, even if only for a short time. As babies this is breastmilk. As adults it becomes a wide array of different things. For me reassurance, and the internal sustenance it gives me, is my milk. I wanted to capture the moments where we feel full, complete and calm. These moments are rare and precious and should be celebrated. I hope I am able to give people some of that feeling with this album.”

When Adam began thinking of ideas for his third album he came to the realisation that his four year old MacBook had more technology on it than The Beatles had available for Sergeant Pepper or that Pink Floyd had used on Dark Side of the Moon. With the confidence that he had everything to hand that he needed to get the album in his head out to the world, he began the process of recording and producing Midnight Milk from the comfort of his own bedroom. What has resulted is not the minimalist album that you might expect, but instead an album that upon listening has been described as an “atmospheric, cinematic experience”.

His live performances are no less “atmospheric” or “cinematic” than listening to the album, promising the audience a cross mix of musical genres, ranging from Folk to Gospel to Hip-Hop with some Ska and Reggae rhythms,  alongside some beautiful melodies that fans have come to expect of this band. Ultimately the performance promises to leave the audience feeling a sense of completeness and satisfaction, the ultimate aim behind the album.

We managed to catch up with Adam during the tour and ask him a few questions about the album and tour.

The theme of Midnight Milk is a curious one, what led you to explore what affects an individual’s contentment? And would you consider this to be a concept album? If it is a concept album should we expect to see an Adam Holmes prog rock album in the near future? (I feel that I should add a smiley here!)

In a way it is a concept record. But perhaps a better way to describe it from my perspective is that I hoped it could serve a purpose as a piece of work that provided reassurance and calm to the listeners. It’s an attempt at gentle defiance against the waves of doubt and fear that life can often throw at us.

Did you find that there were any limitations when recording at home that made you wish you’d gone to the studio instead?

There was no point where it felt like it was the wrong thing. Everything flowed beautifully. It felt like everyone involved instinctively understood where it had to go. Despite a strong sense of the desired outcome it was really open until the last minutes of mixing in terms of direction. It was a completely kinaesthetic process from start to finish.

You’ve worked quite closely with Rachel Sermanni over the years and it seems to be a formula that works well. Any thoughts or plans for a full collaboration between the two of you?

We are currently working towards a big project beginning early next year.

Is there any one album that you would reach for if you needed musical inspiration to help you feel calm?

Not necessarily an album but anything by Bob Marley is good. Old spiritual stuff like the Dixie Hummingbirds and Mahilia Jackson provides a good deal of perspective and assurance. Tom Petty can get you out of a jam too.

Looking at the tour dates you’re clearly covering a lot of miles over the next few weeks. Are there any venues that you’re particularly looking forward to visiting?

All of them! The biggest thing for me with any venue is the energy in the room while we’re playing and any gig I’ve ever played in Inverness has always had such an amazing energy. Last year we played a tiny room in the back of a pub in Biddulph and it felt incredibly special. In general you look forward to being with your friends and playing music for people who want to hear it!

I was reading an article that said artists were ditching long intros because Spotify users, being a fickle bunch, will only listen to the first 15 seconds of a song before moving on. The opening track has a fairly long intro, is this something you’d ever take into account? Or do you just accept it as a reflection of our consumer habits and refuse to compromise?

In the context of creating midnight milk it wasn’t part of the thought process but if it helps people to hear what you do it’s not so good to be precious of your preconceptions regarding how things hang together as part of one complete piece. At the end of the day it’s a collection of songs and the audience will possibly see it more in that fashion than the people who create it.

Midnight Milk has a wide range of genres in the mix, was it deliberate decision to mix it up a little or did you find it came together quite naturally during the process of song-writing?

More what was deliberate was the attempt to find the thread that connected the different genres. There was definitely an awareness that there were a lot of different styles that informed its feeling but not so much a concern. There was a confidence within the sonics and the message.

You can buy tickets here