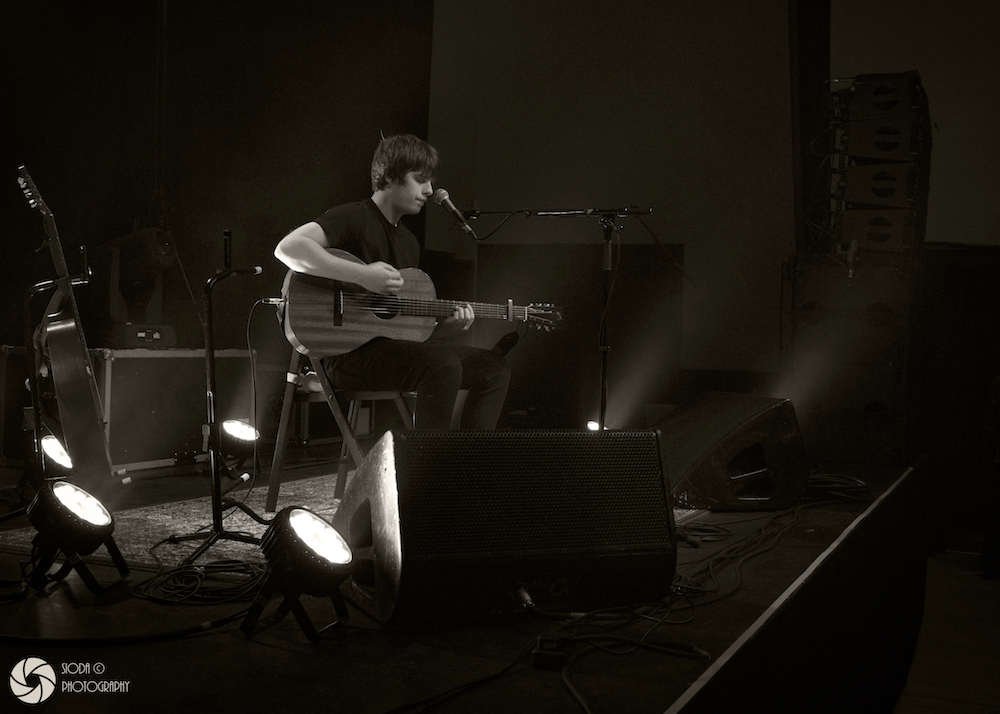 Jake Bugg, with support from Georgie, at Strathpeffer Pavilion.

The Strathpeffer Pavilion is a sizeable venue for the village and it takes a big name these days to take crowds to the village, unlike the days of The Beatles it was packed every weekend, except it famously wasn’t The Beatles that were packing it out. Tonight it was Jake Bugg on an acoustic tour following the launch of his fourth album.

But first it was another acoustic soloist Georgie who came to the stage. Also hailing from Nottingham, Georgie has a very no nonsense approach and delivers with engaging power. She interacts well with the audience whether it be her asking the women in the crowd who can drink more than their partner or her admiration of the local scenery. Her voice carries the room, and has husky undertones, which work well, for example, on her cover of Fleetwood Mac’s ‘Landslide’. But she is more than just covers and her songs have a life of their own, a bit like that personal touch that Lucy Spraggan pulls off. A good opener, and if you get the chance look out for her single ‘Hard Times’. You won’t regret it.

There was much anticipation Jake Bugg in a venue that has seen a sparse number of real headline acts over the last decade. The Kaiser Chiefs and Frightened Rabbit spring to mind but the fine old venue doesn’t see that many and it is an occasion when it does.

Jake arrives on stage to rapturous applause and sits on a chair close to a mic, a position he would hold for the evening. He opened with “Hearts That Strain” the title track from his latest album. A little more understated than his earlier work it is nonetheless a statement of his new material. Throughout the set he draws upon tracks from his new release which although it doesn’t have the same impact for some it is still gives a platform for his musicianship. It may just be a man with a voice and a guitar, but he knows how to create intensity with this naturally. It just takes Jake to tilt his head back and let his voice go and the room becomes engaged. The evening focussed on his recent album and his eponymous first. There is a contrast between the two as the perceived angry young man of a few years ago is replaced by a more considered outlook. It’s that growing maturity that dominates the set; seated and comfortable with his music, mixing old with new and adding in a cover for good measure, Glen Campbell’s ‘Wichita Lineman’.

What was noticeable tonight was Jake’s punchiness as he rounded off songs and what felt like a lack of engagement with the audience beyond a thank you at the end of songs. I sensed, rightly or wrongly, and I’ve not seen him live before, that there was an element of frustration as such. It was also noticeable that there were elements within the audience who spent more time chatting, taking selfies and comparing photographs than actually watching the performance. Bizarrely, I even saw someone pass by me with a tray of drinks in the middle of the gig; it was all a little surreal.

Before he left the crowd with ‘Lightning Bolt’ Jake thanked those in the audience who listened as, he said, I know a lot of you didn’t. And to be honest, I’m glad he did as I found pockets of this audience as ignorant as I have ever come across. You could see that people were straining to hear or getting better positions, certainly where I was anyway.

The irony of it all was that those who he was chastising jumped as high to ‘Lightning Bolt’ as those that listened throughout, with their phones out, recording every shaky second.