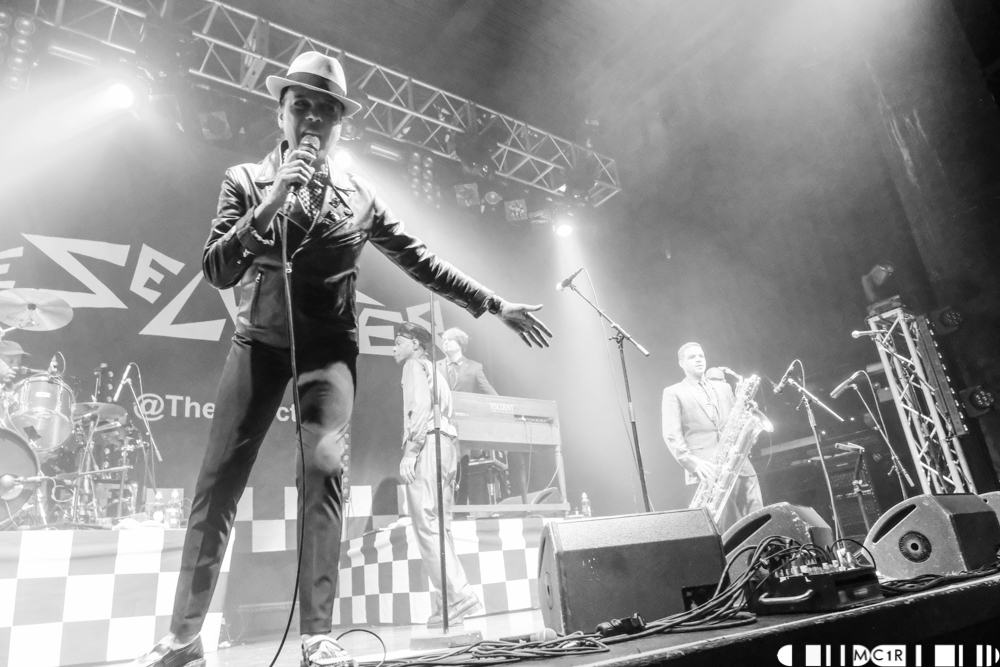 The Beat ft. Ranking Rogers and The Selecter at The Ironworks , Inverness.

As the great Ranking Roger pointed out early on in the evening, the only way to beat the cold on a nippy November night is to dance yourself warm, something the crowd at The Ironworks took straight to heart. The co-headline show shared by 2 Tone legends The Beat and The Selecter drew one of the most enthusiastic crowds I’ve seen in the venue for quite some time. The place was a sea of Fred Perry classics and fedoras and was absolutely buzzing. Although the venue wasn’t completely sold out, I decided that this was probably the ideal crowd; lots of really enthusiastic people with a wee bit of extra space for dancing.

After announcing a few dates of a joint tour, the bands were met by such a positive response and demand they made the decision to put on over 20 further shows across the country. However if they’re feeling over worked in any way by the long string of gigs, it didn’t come across in their performance which delivered the non-stop ska energy that the bands are so well known for.

The Beat ft. Ranking Roger were up first on the bill. After the bands initial whirlwind success in the 1980’s and subsequent split, The Beat has taken many forms and have been recognised by different names across the globe. Original band member Ranking Roger and his son known on stage as Ranking Junior and front the current line up, accompanied by a five-piece band. They delighted the crowd with the original big hits such as Mirror in the Bathroom and Hands Off…She’s Mine but also tracks from their latest album Bounce released in September 2016. The new songs hold onto the classic sound and style whilst subtly updating and adapting to include a bit more of Ranking Junior’s influence and talent which really shone through on stage. Songs such as Fire Burn prove that the political activism that was such a central part of the 2 Tone Movement is still relevant today. At one point Ranking and Ranking Junior exited the stage leaving us in the capable hands of the band and whilst they are lucky to have such enthusiastic and naturally engaging front-men, this gave us all a moment to appreciate just how talented these musicians are and the dynamism of 2 Tone music.

After a short break and impressive speedy stage change, it was time for The Selecter to grace the Ironworks stage. In the bands long history, they have never before visited Inverness however they commanded the room as if they’ve always owned the stage. The Selecter seem to have become more and more confident and feisty, as the years have gone on. I had heard that front woman Pauline Black is a famously self-assured performer and was eager to see how that had changed with the times and the release of their new music. Obviously I can’t say for sure but with the sheer power of her voice, boisterous banter with the crowd and her fantastic fedora and suit get-up, I feel like I was experiencing as powerful a performance as would have been expected when the band first rose to fame. There was a really positive on-stage affinity between Pauline and co-frontman Arthur ‘Gaps’ Hendrickson that made the whole performance a complete joy to watch. Once again, the band played a real mixture of new and old songs all of which kept the audience on their toes.

From their big hits On My Radio and Three Minute Hero, to songs from their newest album Daylight which was released just last month. Daylight has been really positively received and has brought the 2 Tone energy and attitude together with contemporary issues both social and political. On a light hearted note, the band at one point incorporated a few versus of 500 Miles by the Proclaimers into the set and the Scottish anthem and Ska really went hand in hand (something I didn’t think I’d ever say), with the crowd ‘da da da-ing’ with absolute glee.

It felt like the crowd could have kept going right into the wee hours but all too soon the set drew to a close but not before the two iconic bands joined together on stage for an electric final song together. If anything, I wish they had come together for a few more tunes as it felt like a really special occasion but alas, it was a short and sweet partnership before they all bid us a final goodnight.

Images of the night below;