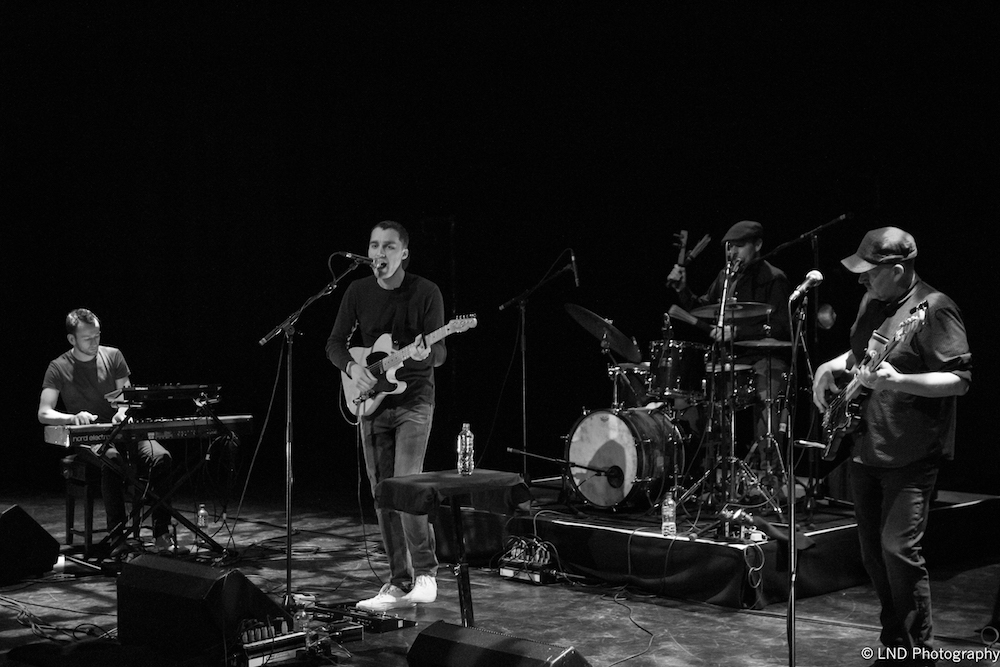 Adam Holmes & The Embers, with support from Rachel Sermanni, at Eden Court, Inverness.

Friday night drew a full house in the One Touch Theatre in the face of stiff competition from Showaddywaddy. Warm applause greeted Rachel Sermanni as she walked on stage and begun her first number of the evening. Rachel stood stocking soled, mandolin in hand, and soon was rising and falling gently on her tiptoes to the rhythm of her first song, ‘Lay-Oh’. As the last note finally reverberated and fell silent, you could hear a pin drop, and the auditorium welcomed Rachel with warm applause. Rachel however, due to the lighting couldn’t see anyone but was happy at first to accept that the eyes of a dragon were upon here. Quite quickly Rachel accepted that they were human eyes. Rachel likes humans, which is no bad thing as humans like Rachel.

Rachel creates an ethereal presence as her songs follow a more free form but are nonetheless structured; a sense of ebb and flow within each song, songs rippling out with varying degrees of culmination. It’s all very captivating as Rachel is aided by Jennifer Austin on keys. They have quite a rapport as megabus journeys and mutual sleeping arrangements while travelling attest.

Rachel always comes across as very serious when she talks to the audience but it also conveys her sense of humour very well. To find out that ‘Wine Sweet Wine’ was really about Baileys was a small revelation but understandable due to the lack of rhyming which was admitted.

As her slot drew to a close it was interesting to hear the backstory to ‘Lay My Heart’ inspired by a perfect evening, a place of bliss as Rachel described it, and her view of the Aurora Borealis. A song in a more traditional format it led to an encouraged sing a long. ‘The Fog’ and ‘Ferryman’ were to follow and the crowd entranced from the start let Rachel leave to full applause.

Following a break it was the time for Adam Holmes and the Embers to impress. They opened by running their first three songs together starting with ‘When Will I Be Free’ which sees Adam lead off with a rap based song, which was very much against what he was to play. It does work though, more light touch LaFontaines than Eminem. That rolled into ‘People Come/People Go’ which has a Paul Simon feel and before they could enjoy audience appreciation they rounded off their opening with ‘Safe In Her Love’.

Songs follow covering everything from the drunken waltz feel of ‘Mother Oak’ to the danceability of ‘Alone We Stand’ gives Adam wide appeal and with the band can really turn their hand to just about anything. Which is just as well as at this juncture a broken string meant Adam setting his electric guitar aside and picking up Rachel’s acoustic to give the remainder a different feel to that what was intended. A different feel that he pulled off with ease.

Adam has a voice that can adjust to each song and it works with acoustic guitar without any loss from the lack of electric. Either way ‘Oh My God’ electric or otherwise appeals strangely to 5 and 7 year olds. There is a swaying warmth to ‘One Soul’ in an evening that made the One Touch Theatre as intimate as a snug house concert. That intimacy extended to a final song written when Adam was 15 for a girl, who he played it to, but ultimately left for Australia.

It was a theme that pervaded the evening. The gig was homely, friendly and engaging with one of the most appreciative audiences that I’ve had the pleasure to sit amongst. Maybe in part I took in this element more than usual following my experience the night before.