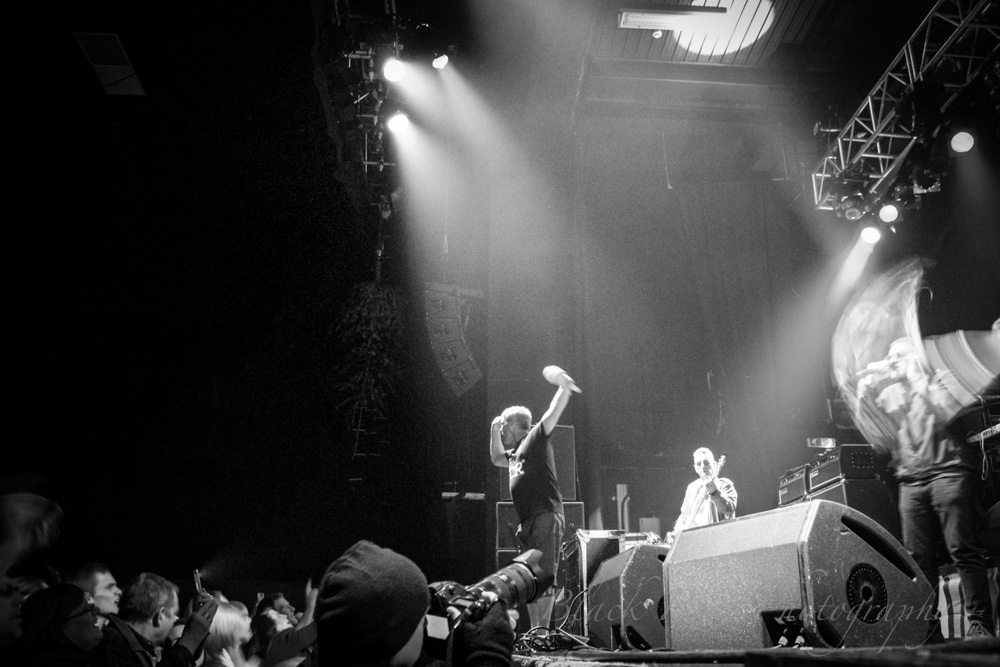 Happy Mondays, with support from DJ John DaSilva, at The Ironworks, Inverness.

On Thursday night the 24 Hour Party People came to Inverness and I suspect many of those in attendance (like me) came to see a band that formed a significant chunk of the soundtrack to their student days back in the late eighties and early nineties.

We know the score, Sean Ryder can’t sing, Bez can’t really dance and they’ve only got a handful of decent tunes. They’re re-living past glories and haven’t done owt of note since their baggy heyday living it large at the Hacienda… you’ve likely heard it all before. But does it matter? Nope. The tunes are there and the band comes with a certain amount of notoriety which is always going to add a certain frisson of excitement before any of their gigs. Fittingly, former Hacienda resident DJ John DaSilva is tonight’s support, providing an hour of tunes to get the venue warmed up before the main act.

The Monday’s set list of course has all the hits we expect and demand to hear. Opening with ‘Loose Fit’ and following on with ‘Kinky Afro’ it continues apace, only really slowing after Hallelujah where there’s a noticeable drop in energy. At times it looks like Ryder looks like he’d rather be anywhere else but up on stage. ‘Rave On’ plods rather than raves and things don’t really pick up again until the last couple of tracks in the set

Despite that, it is a hugely enjoyable gig. Bez mostly lopes about like your drunk Uncle at a party, frequently getting in the way of Ryder and Rowetta and has to take frequent breaks to rest, ‘me knees have gone’ he says before ambling off with a bit grin.  Ryder mostly takes a back seat and there’s not all that much in the way of chat from him, he leaves the majority of crowd interaction to Rowetta and Bez. The latter two are hugely entertaining, Rowetta still sounds brilliant and adds extra depth and harmony to Ryder’s barked lyrics. Meanwhile Bez mugs and poses for the Ironworks, acts like a teenager and by all accounts has a whale of a time. Ryder grins at the the reception the dancer gets and wryly comments ‘It’s obvious who you lot like the best’.

The pace picks up towards the end of the evening and ‘Step On’ is as you’d expect, an utter riot while the Encore ‘Wrote for Luck’ is a suitably noisy way to finish the evening. Ryder signs off with a quick wave before wandering off stage right while Bez hangs around for a few minutes longer to eke out the audience adulation.

Despite the slightly flabby and slow mid-section (age will do that to you, as I know only too well!) it’s ultimately a great way to see out December by a band who have partied, continue to party and will remain partying for the foreseeable future. It’s impossible not to walk away without a smile.

Check out our reviews of the year, below;