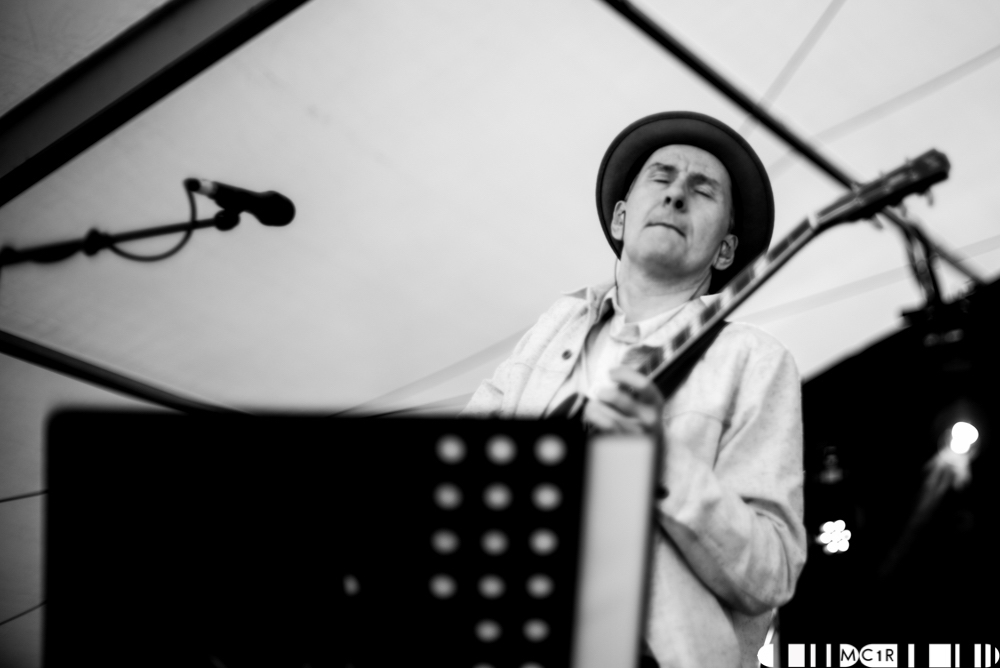 With his new album ‘Too Many Guitars To Give Up Now’ released on 2 February and an upcoming show at Eden Court Theatre in February, we caught up for a chat with Andy Gunn.

IGigs: As a youngster starting out in Jumpin’ The Gunn could you have seen yourself still recording with the passion that you have now?

Andy Gunn: To be honest yes, I’ve always been mad for the music. As soon as I heard my Mum’s rock ‘n’ roll records and an old AC/DC tape left by one of my Dad’s friends, I thought AYE! This is where it’s at..! And when I picked up the guitar and plucked out a high E, one string stilted version of Whole Lotta Rosie on an old beat up guitar from my brother’s cupboard I was hooked!

IGigs: Your new album ‘Too Many Guitars To Give Up Now’ has been recorded on an analogue system. Was there a particular feel that you were looking to emulate with this method?

AG: The inspiration for this album was actually in part from an old blues record ‘Buddy and The Juniors’ with Buddy Guy, Junior Wells and Junior Mance. It’s a guitar, piano and blues harp recording and was done live in a studio to analogue tape. It was some rough edges but it has so much passion and feel that that was something worth trying to capture for myself.. Since moving to Edinburgh, apart from moisturising and making a statement with the curtains, I’d been jamming with a rhythm section, so I decided to add them to half the tracks also. It was recorded live in two days and although there are little imperfections here and there, that was something I was willing to trade for a recording that was honest, heartfelt and captured a performance. You don’t really get that when you overdub and tweak the humanity out of recordings, blues especially is about the interactions between the musicians and the spaces you leave between the notes, something you lose when you piece it together with overdubs.

IGigs: You recently shared a very warm rejection letter from Alligator Records and Management in the US, but a rejection letter nonetheless. Do you have any advice for any young acts trying to make their way in the industry and receiving replies less friendly than the one you received?

AG: Well, yes it was a nice letter but he basically said it wasn’t quite in the style that they normally put out and regardless, they only work with acts based in the US. But it was encouraging which was nice. I think it’s good to be open to criticism as long as it’s constructive and Bruce from Alligator generally is. Record your stuff and listen back to see what you actually sound like, play it to other musicians, play it to your average punter, see what they make of it. Constantly be taking notes on how you can improve, there’s always things to work on, in my case the singing and lyrics, those things didn’t come as naturally to me as maybe other people.

IGigs: With your new video ‘Warm Heart Blues’ premiering on The Telegraph how much of a validation of your work is it to have it recognised at a national level?

AG: Sure it was nice to have it premiered in such a major publication and we’ve been getting good feedback and exposure from it. However, I learned a while ago that humility is not about beating yourself up, but about having an honest picture of yourself. So, I strive to have that, to acknowledge my strengths and weakness’, assets and liabilities in life. And so, whilst it’s nice to have a broadsheet say all these great things about you I don’t let it go to my head because I know how good I am, what I need to work on and what sounds good.

IGigs: As you return to Eden Court you said in a previous interview with us that “the big difference preparing for Eden Court and most other gigs are that the acoustics at Eden Court are perfect”. Do you get more enjoyment out of playing a theatre venue before a seated audience than say a club or pub?

AG: Haha it was actually Frazer McLean, our rhythm guitarist that said that, or Frazey Wazey as you may know him! But I get what he means, it’s a beautiful sounding theatre, great PA, stage and lights and the engineers always do a fantastic job, so I suppose it is different from playing a pub. Personally, I like it when people come to listen.. It’s one of my favourite places to play and with bringing a 7 piece band with me, I think it’s going to be a really special night. We’ll have as well as the core band, keys, harmonica from the brilliant Spider MacKenzie, harmonies (and a support slot) from the soulful, fiery Liz Jones and Sax from renowned Dundee Jazz Saxophonist Gordon McNeil (who is in demand at festivals and shows all over Europe and as a teacher). Plus we’ll be making a film of the night with the help of Charlie Wilson from the local University.

AG: Apart from selling a few things on eBay I think that’s about it, a cool album and tour! Oh and I’ve got an endorsement deal with Duesenberg Guitars in Germany and St Blues Guitars in Memphis. Duesenberg make beautiful art deco, really characterful sounding guitars. St Blues make these really cool little cigar box guitars, that sound mashed up and funky.. So, I’ll be playing them on the night and giving her diesel! I’d love for you to come along and enjoy a great night of bluesy, jazz inflected, funk and singer songwriter music!

To keep up to date with Andy go to www.andygunn.net

Check out the album, and buy it here.

You can see photos of Andy’s last gig at the Eden Court below;