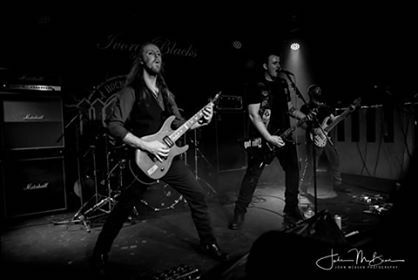 Ahead of their gig at Tooth & Claw in February, Neil Craig of MacTallica chats to IGigs.

Describing themselves as “Scotland’s best and only Metallica tribute”, MacTallica would appear to have the market wrapped up for those wanting to experience (almost) the majesty of one of the biggest selling acts in American history. The tribute band head north in February and we wanted to catch up with them;

How did MacTallica come about?

Mactallica started up in 2012, myself and a few friends put it together as a fun project on the side of various other original bands we were doing at the time. The name came from an older mechanic I worked with called Drew, who used to come out with the cheesiest one liner jokes ever! We’d rehearse for a few months, put on a gig in Glasgow with our friends bands, then shelf it for a while.

I moved away to Australia for a year and the band sort of fizzled out after a while, my friends had all taken on extra commitments with bands or jobs or kids and we couldn’t find time to keep it running.

After a couple of years, I was getting itchy to get playing again, so I put an ad online for new members and fairly quickly we had the current lineup in place. Everything just seemed to click, the talent of Tony (lead guitar), Mark (drums) and Ryan (bass) is just unreal, we’re all proper Metallica geeks and we get along great, we’re having a lot of fun with it.

Which are your favourite Metallica songs to play, and why are they so significant?

Personally, my favourite Metallica song to play is a Thin Lizzy song!! Whisky in the Jar is my favourite to play, it’s a fun song to play and always gets a great response. We also throw in a few obscure songs that Metallica don’t play live much, like Astronomy, Orion, Damage Inc, Spit out the Bone etc.

It’s always good seeing the crowds getting into it when we throw them a curveball!! We’ve got a Youtube video of us playing Spit out the Bone at a gig in Glasgow about 5 or 6 weeks after the song was released with 50 odd thousand views, which is pretty hard to believe. We got slated in the comments right enough, but that’s the internet for you!! I though we were no bad, given the short time we had to learn it, we’re a lot better at it now!!

Metallica have retained their relevance and popularity over the years, why do you think that is?

They’re the best!! I think they’ve constantly evolved and drawn in an ever increasing fanbase, a lot of bands from Metallica’s era just released the same album over and over. Metallica have continued to change and evolve and keep things interesting. They seem to do things their own way rather than imitate, which is admirable, even if it risks a backlash from fans like when they released Load/Reload then St Anger. The new album Hardwired to Self Destruct is amazing, shows they’re still a lot of gas in the tank and they’re far more than a “greatest hits” nostalgia act

Do you think that tribute bands get the respect that they deserve?

I can only speak for my experiences in Mactallica, but yeah, everybody we’ve worked with from promoters, venues and the Metallica fans who come to see us have been really supportive of our gigs. I think the tribute band scene is a great thing as long as everyone remembers that it’s just a bit of fun, don’t take it too seriously and have a good time!
We work really hard on our band, but we try not to let any praise or respect go to our heads, there’s a big difference between working hard to emulate your favourite artist and bands who write their own material and create their own image.

There’s some really amazing bands gigging around Scotland at the moment such as Mason Hill, Darkness Divine, Last Alibi and Of One Blood to name just a handful, I think what they’re creating deserves far more respect than any of the tributes. That being said, there’s still great entertainment value in going to see your favourite tribute band, suspending reality for the evening and enjoying the hard work they’ve put into recreating a show!

Ivory Blacks looked like a special night, what are the elements that make a good gig for you?

Ivory Blacks was a great night for us!! We played with a fantastic AC/DC tribute called Volts. We’ve played together a few times now and become good friends, so it was great to bring them to Glasgow as they hadn’t played there in a few years. It’s hard to say sometimes what it is that makes a gig special, but in Ivory Blacks the sound is phenomenal, the place was packed and the crowd were brilliant from the very start!! We love it when the crowd get into it, sing along and enjoy it as much as we do. Hopefully we’ll see a lot more of that on the 24th at The Tooth and Claw, it’s our first venture up to Inverness and we’re very excited about it!!

MacTallica plays Tooth & Claw, Inverness on the 24th of February, 2018.

Buying tickets from this link supports the website, with no additional cost to your goodselves.