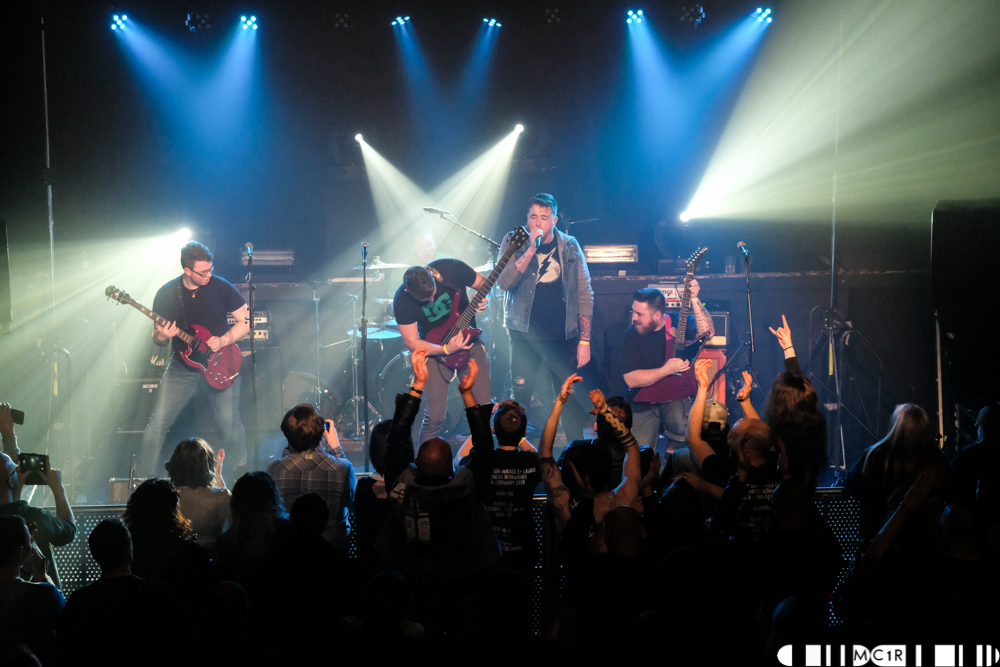 Saturday night in the Ironworks sees local band Cobalt celebrate the release of their debut EP ‘Bourbon Nightmares’ and they’ve brought a trio of bands to support them on what on the face of it promised to be fairly raucous night of rock music.

Opening are Airrade who musically meld AC/DC, Iron Maiden, Motley Crue and visually go straight down the road of late eighties Glam Rock. They’re brash, young and utterly without irony and perform with a tremendous amount of self belief.  Other bands (cough –  Steel Panther – cough) deliver this kind of thing with a large slab of irony and not a little ill-advised misogyny, but these chaps are living and breathing their music and it really does work for them. They even manage to chuck in a guitar solo and drum solo to their short set. Speaking of the drummer… he’s terrific. And 14!

They falter slightly mid-way through the set and it sounds a little disjointed, as if they’ve become a little self conscious, but they bring it back together to finish triumphantly. They are utterly ridiculous and brilliant with it. It’s a real pleasure to see a young band grab rock music by the bollocks and give it a proper shake. My only criticism would be the band name; please for the love of mercy change it guys, it’s awful. Sorry!

Black King Cobra are from Glasgow on their first visit to the Ironworks and play a jazzy, funk-metal fusion that that I haven’t really heard since the days of Living Colour or even Infectious Grooves. Technically they are one of the tightest acts I’ve seen in a long time and musically they’re very easy on the ear. They keep well away from cheesy RHCP ‘California’ territory and their set, in my view at least, zips past way too quickly. It’s hard to believe that they’ve been together less than a year going by the quality of music on stage and I’ll be very interested to see what the future holds for them.

Devil’s Queen are on next and I’ll admit I’ve always blown hot and cold when it comes to the band, they’ve always been solid enough outfit but the slight change in lineup does seem to have invigorated them. The return to the fold of singer Ross Holland is the final part of the jigsaw puzzle for the band and he adds a grittier presence and vocal side to the heavy hitters from Inverness.

I liked their old singer well enough but found that his on and off stage antics during their sets became a bit tiresome after a while and detracted from the music. They’re still not quite the finished article yet though and I feel they’re lacking a few songs that really grab you by the throat. However the energy and noise on stage is impressive and I do feel we’re going to get some quality material from them as time goes on. There are some mighty slabs of metal to come from this lot and going by last night I reckon there’s some good stuff to come.

The night is of course all about Cobalt and the release of their new EP (you can check it out via any of the populate steaming sites). They’ve got a tough job on their hands following on from three quality acts but the reason they’re headliners (other than the fact that it’s their own EP launch night) becomes quickly apparent as they demolish already tattered eardrums with 45 minutes of uncompromising metal.  Frontman Craig Kelly can roar with the best of them and the rest of the band are in imperious form. This is their night and they damn well know it.  Songs like ‘Martyr’ are hefty beasts and ‘Ironside’ written by and named after bassist Rob Ironside is two and a half minutes of throbbing noise. Poor Rob was called out by the frontman for being a ‘pretentious prick’ naming a song after himself but it’s a good tune so I reckon we can forgive him.

Giving Killswitch Engage and Clutch a run for their money but with enough hooks and melody to placate those with more delicate tastes in music, they leave the stage with the crowd wanting more. I’m first and foremost a metal fan and the evidence tonight would suggest that the Inverness rock and metal scene is fermenting and percolating away just nicely. If we get more nights like this then I expect it to explode.

Photos of COBALT can be seen here

See our COBALT’s video from the EP below;