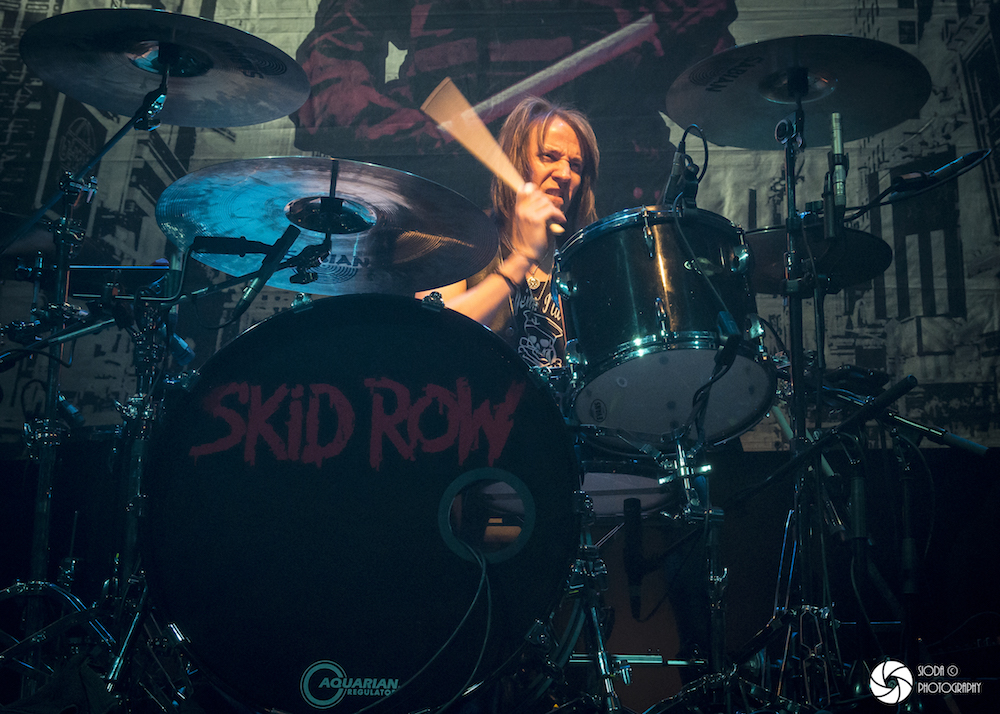 Skid Row with support from Bad Touch and Toseland, at IRONWORKS, INVERNESS

Bad Touch are first on and there’s really nothing too complicated here. They’re not playing anything new or original but what it is, is utterly unapologetic rock music. It’s like they’ve been parachuted in from the seventies to remind us what proper music is all about. It’s all big hair, bigger flares and even bigger guitar solos. Unsurprisingly they go down well with those who’ve made it to the Ironworks early. They’ve been up this way before in support of King King and they’ve obviously picked up a few fans in Inverness from that last visit. It’s the perfect antidote to the dreich weather outside and they’ve got a Southern Rock vibe running throughout that lends itself to sunny road trip weather.

Seriously, where can you even buy denim flares these days?

Toseland are in a similar vein to Bad Touch and they keep the momentum going as the lead in for the main act. Lead singer James Toseland is a former World Superbike Champion, married to Katie Melua and apparently a pretty talented musician to top all that off. They’ve two albums under their belt and deliver a half hour set of rousing rock tunes.  ‘Renegade’ was heavily rotated on the likes of Planet Rock radio when it was originally released and this along with ‘Life is Beautiful’ are as catchy as it gets. Skid Row have chosen their support acts wisely.

As you might expect Skid Row are about as subtle as ten tonne of bricks. They start as they mean to go on by hurtling straight into Slave to the Grind which sounds as uncompromising as it did when it was first released a few years back. Singer ZP Theart is relatively new to the fold but the chemistry between him and the band is obvious from the start and he’s clearly in his element. His vocal range is impressive (this is the former lead singer of Dragonforce after all) and he easily hits the higher notes that typify the songs from that particular era of Skid Row history

The majority of the set is made up of songs from the first two albums and there’s enough here to keep even the most hard core of Skid Row fans happy. Again this is another act that you could claim were playing the nostalgia card, however they are working on new material and let’s face it, ‘Monkey Business’, ’18 and Life’ and ‘Youth Gone Wild’ are stone cold classics that need to be played live and heard by wider audiences. The sheer balls out savagery of these songs still make some of the current crop of so-called metal bands sound utterly weedy in comparison. Or… maybe I’m just a grumpy old git… a Codger Gone Wild if you will.

Sporting a ‘Punks Not Dead’ shirt wrapped around his waist, bassist Rachel Bolan gives ZP a break and the rest of the band perform a thunderous cover of ‘Psycho Therapy’ by The Ramones with Bolan on lead vocals. Lighters (mobile phones) aloft moments come not once but twice with ‘Quicksand Jesus’ and ‘I Remember You’, a nice reminder that Skid Row were purveyors of some of the finest ballads in the land. Set closer ‘Youth Gone Wild’ might be slightly ironic considering the average age of ticket-holders, but it does go some way to prove that age ain’t a number, it’s a mind-set, aided by some strong painkillers and a healthy dose of alcohol!

It’s a vile, dreich night outside but Skid Row brought more than a little warmth with them to the Highlands. Judging by the remarks being made by the band on stage it may not be the last time we see them visit the Highlands.