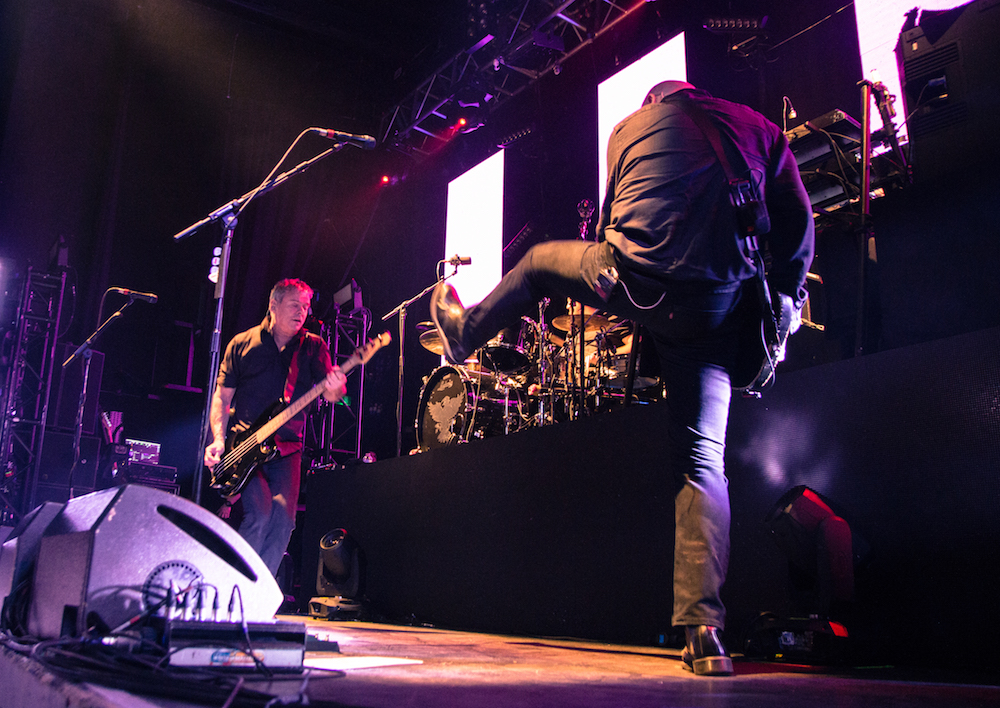 The Stranglers , with support from ?Therapy, at Ironworks Venue, Inverness.

Inverness may have been dubbed both ‘Tesco Town’ and ‘Tulloch Town’ in the past due to the preponderance of both those brands’ supermarkets and houses, and the current penchant for not quite the real thing the moniker ‘Tribute Town’ could be next. Thankfully the likes of The Stranglers still find Inverness a valid and worthwhile stop on their tours, and a full house to boot too.

The same can be said of Therapy?, support for tonight, with Andy Cairns not only singing the praises of playing Inverness, but was heartfelt in his desire to play here again. Opening with ‘Die Laughing’ the energy set the tone for the set. This was as close to pop punk as they will get and the harder, darker edges of Joy Division’s ‘Isolation’ were more defining as were the hard grunged and dirty, with mind bending samples, ‘Teethgrinder’.

A set interspersed with tales of middle class quaffing of Buckfast and life experiences in Ireland their slot drew to an all too soon close with the James Joyce referenced Irish folk song ‘Potato Junkie’… They threw in a bit of ‘Flower of Scotland’ mid song and if that was to belatedly win over the crowd they needn’t have bothered, they did that when they first struck up.

The spotlight now turned to The Stranglers whose stage setup with extensive video screens and lighting backed with a two tier stage with drums and keyboards raised behind. The stage sprung into life as ‘Waltzinblack’ announced their arrival. Opener ‘Curfew’ rolled into ‘(Get A) Grip (On Yourself)’ as the crowd took in the enormity of the stage set up. At this point Baz Warne, who takes what would have been the Hugh Cornwall vocal from back in the day and does it with aplomb by the way, takes a dig at the A9 route to Inverness. Engagement with the crowd was good but unfortunately not always welcome. But we’ll come to that.

It was clear that there were a mix of fans, superfans you could say, and those that knew the hits. This was evident when the likes of ‘Peaches’ came along and a cheer greeted the visual. Equally the ‘Golden Brown’ with its ever so trippy keys brought out the first notable array of mobile phones. ‘Always The Sun’ caught me a little off guard as the audience joined in with the chorus, especially those who were standing around me who were remarkably in tune making this quite a memorable and uplifting moment! Baz at this point had to share his amusement at the shirtless ‘skinny little twat’ who was on a girl’s shoulders. The crowd were getting this set and lesser known, and earlier from their catalogue, songs, not to the committed of course, were getting a fair hearing. Within that I include ‘Don’t Bring Harry’ with JJ Brunel still on vocals as he does with those that he originally did, ‘Water’ and ‘Summat Outanowt’.

The majority had come to hear the likes of the likes of ‘Walk On By’ with Dave Greenfield’s psychedelic keys and the bounce along that is ‘Duchess’. It was at this point that, in Baz Warne’s words a ‘fucking tool’ launched a drink at him on the stage. Other words were used as a clearly annoyed Baz remonstrated in the direction of the individual, and this continued with a Wearside death stare through the next song.

Definitive tour-day 3 Inverness: cracking gig in front of a capacity crowd at the Ironworks (pic Andi)

The set continued unabated as they stormed through the remainder tying it all up with ‘London Lady’ and ‘Tank’ before returning for an inevitable encore. Baz did reference the earlier drink throwing event when they returned and the wringing of necks… However, they brought the show to a conclusion with a rousing ‘5 Minutes’ and an energy sapping ‘No More Heroes’. A night which worked for the fans and those that just wanted to see The Stranglers put on a show with lights and visuals; a far cry from those early punk days but in keeping with the evolution of the band.

Check out our pictures of the night;