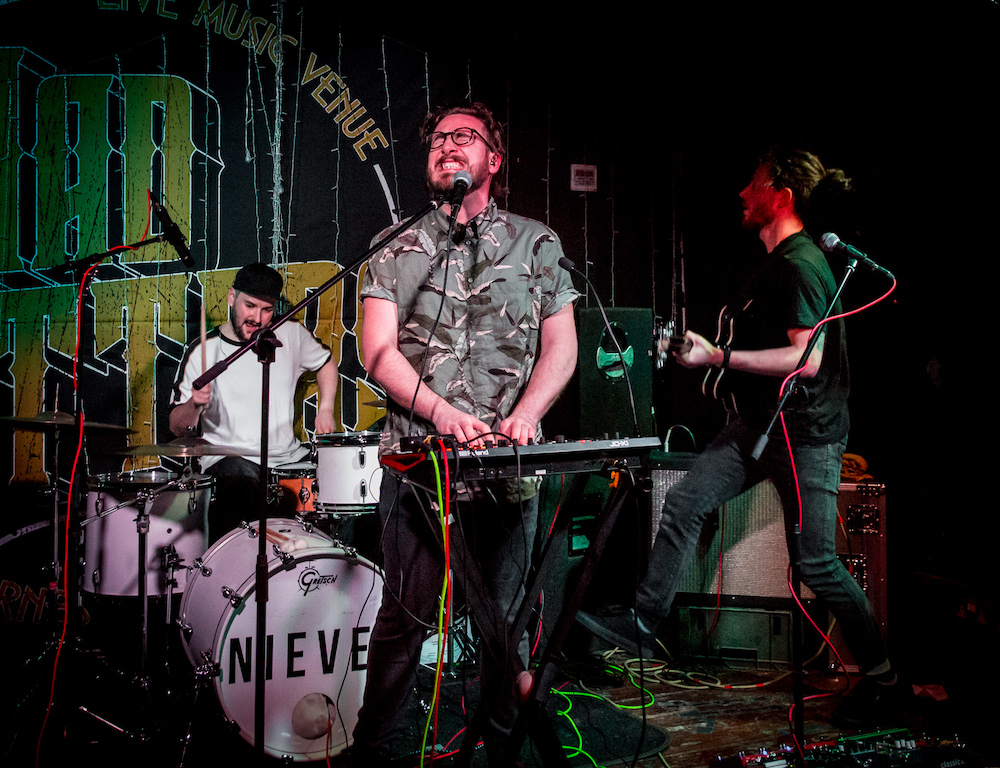 Nieves, with support from November Lights, at Mad Hatters, Inverness.

Glasgow band November Lights have nearly two million views clocked up on a YouTube video of their single ‘Talk’ . Imagine their surprise to be playing this support gig in Inverness to about 20 people including the headlining band. It’s a very quiet crowd too but singer/songwriter James Hopkins on Piano and Scott Mitchell on acoustic guitar got straight onto the dismally dark stage and into their set of, what has been described as, anthemic songs.

It’s the nature of that type of material to sound big and full, played with a band especially with a drummer and that element being missing here is very noticeable. It’s maybe the house PA speakers being tired from years of punishment but the sound is very glassy and thin with very little bass. This problem contributes to the feeling from this reviewer that November Lights material really benefits from a band set up.

That’s not to say I did not enjoy the gig. The songs are strong. ‘Stay’ is heartfelt and introduced by James as being about losing someone you wished you’d got to know better . The aforementioned two million YouTube hit ‘Talk’ was fantastic and got some of the now slightly increasing  crowd singing along. New material including the big chorus in ‘Pray’ is due for release in April and should see this band continue to go from strength to strength.

Just as I was wrangling with the need for a big sound to go with “anthemic” songs on to the stage pop Nieves to prove I was bang on. A huge sound from Keyboards, Synth, Guitar and Drums.

A larger crowd has filtered in to see the main act and it’s obvious from the start that many of those here tonight are Nieves fans rather than just random curious punters.

Front man Brendan Dafters has a very infectious line in banter and has the crowd going from the outset. First thing he does is encourage the crowd up to the front of the stage to get involved. This involvement is what gives people the feeling  of a gig they will remember. More bands should adopt this policy and people will talk about the gig to others as a more memorable immersive experience.The band keeps up the energy with the crowd now singing along with familiar choruses such as ‘Exist and Expire’ and ‘A Beginning , A Middle’ further enhanced now with synth drums and acoustic guitar.

To me the sound is reminiscent of a mix of the best attributes of U2 and Snow Patrol. I am also struck and impressed by Brendan retaining his fine Glaswegian accent even when singing in full ‘epic’ mode. Ticking all the boxes for Scottish alt rock music here.

‘This is not me’ is described as being about a mate who is more messed up than you are .  The most cynical of songs ‘Strangers are just people you don’t hate yet’ followed by ‘Don’t let us be next’ which is about false sentiments all complete a night of big songs with big choruses.

The one night Weegie invasion of Inverness was welcomed with open arms.

Check out our photos of Nieves from the evening;