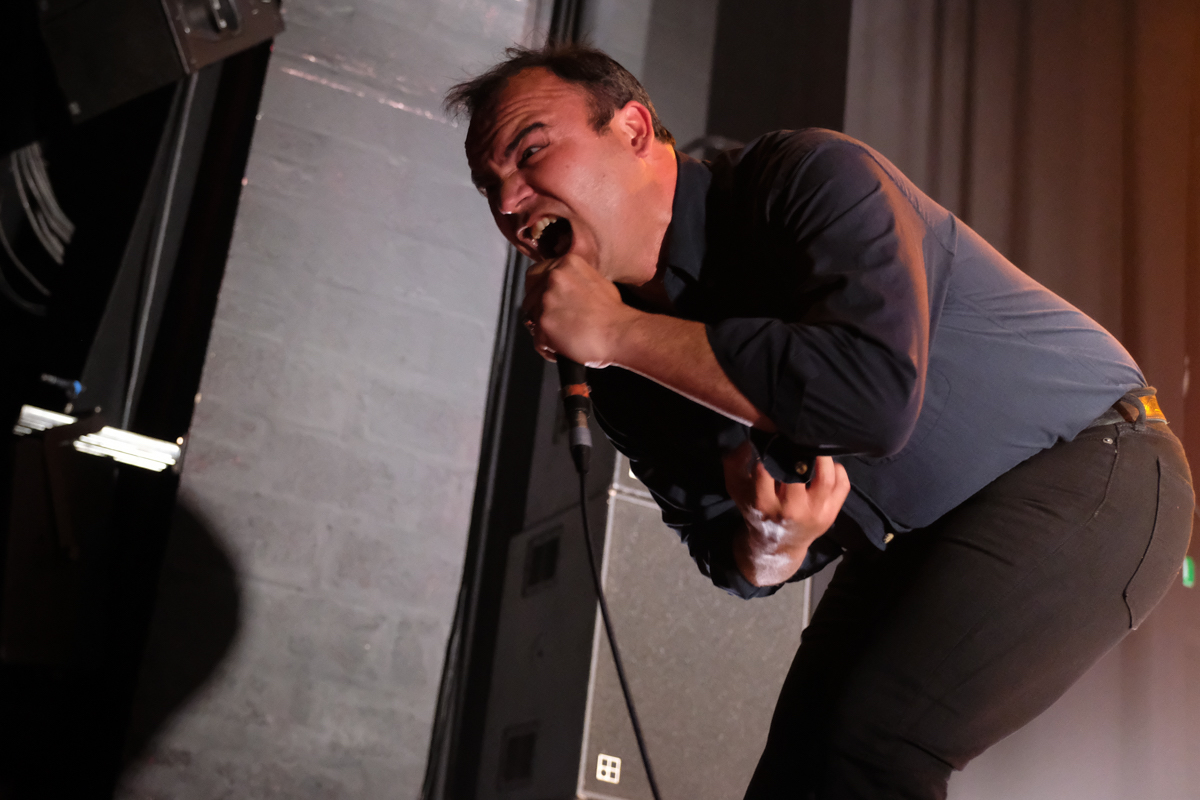 Future Islands, with support from IDLES, at Ironworks, Inverness.

The bulk of the crowd had arrived in advance of the support to Future Islands, IDLES, but maybe that was more than just being unfashionably early and was an opportunity to catch Bristol’s IDLES. For those that hadn’t heard of IDLES before they certainly had thirty minutes later after being ambushed by their catchy post punk onslaught. With Joe Talbot snarling a Lydonesque delivery to a cacophony of a backdrop with every ounce of energy perspired, their politically and socially charged set, with a bit of chest thumping thrown in for good measure, kicked up a storm.

Infused with a bit of humour and a smattering of advice, don’t read The Sun it will give you cancer, IDLES made an indelible mark on the Ironworks audience tonight. Joe did say that, as a support, they were not the most apt but they were the most grateful. I would dispute that but in any case, we were most grateful.

Anticipation was now rising in the packed venue as the arrival of Future Islands neared. The lights dropped and the sound of water, as the early strains of “Tybee Island’, drip fed the band to the stage. First, bass player William Cashion took up his spot followed thereafter by Gerrit Welmers making his ways to his keys at the far side of the stage. Once Michael Lowery took up residence behind the drum kit it only required the entrance of Sam Herring to light the touch paper.

The set quickly gathered pace as “Ran’ gets an early showing along with ‘Beauty of the Road’. Sam makes full use of the Ironworks stage, and for once, it actually looks small as his perpetual movement covers every square inch. His movement is in stark contrast to the somewhat static, and even nonchalant stance, of the band. But they provide the scaffold from which Sam contorts, gyrates and feels every beat of every song.

It’s like a therapy, but his therapy is as much the crowd’s therapy and both feed off each other. He feels each word, forms it, manipulates it, and lets it loose, often with that trademark throaty roar. How his voice has survived relentless touring is somewhat of a mystery. But that feeling and emotion is never far away. Take ‘‘The Cave’ it is clear that he really doesn’t believe anymore.

There is a lightness too as he drops his guard and talks about their visit to Loch Ness, and also a visit to Bristol, linking to IDLES, and waking up after a heavy night in an estate agents. They enjoy playing live and Sam’s face gave this away tonight, as did the crowd’s faces as they dance throughout the set. With favourites such as breakthrough song ‘Seasons’ creating the biggest stir on the floor, they worked tirelessly towards the end of their set. After brief respite an encore ensued first lifting it up euphorically before dropping it right down with ‘Little Dreamer’ which saw Sam dissipate the last of the evening’s emotional energy. And with that the night was over…

Future Islands are one of those bands of the moment, who perform, and it is a performance, in that moment. Coupled with IDLES, who were extraordinarily good, this was quite a night to be in Inverness.

Pictures of the evening can be found here;