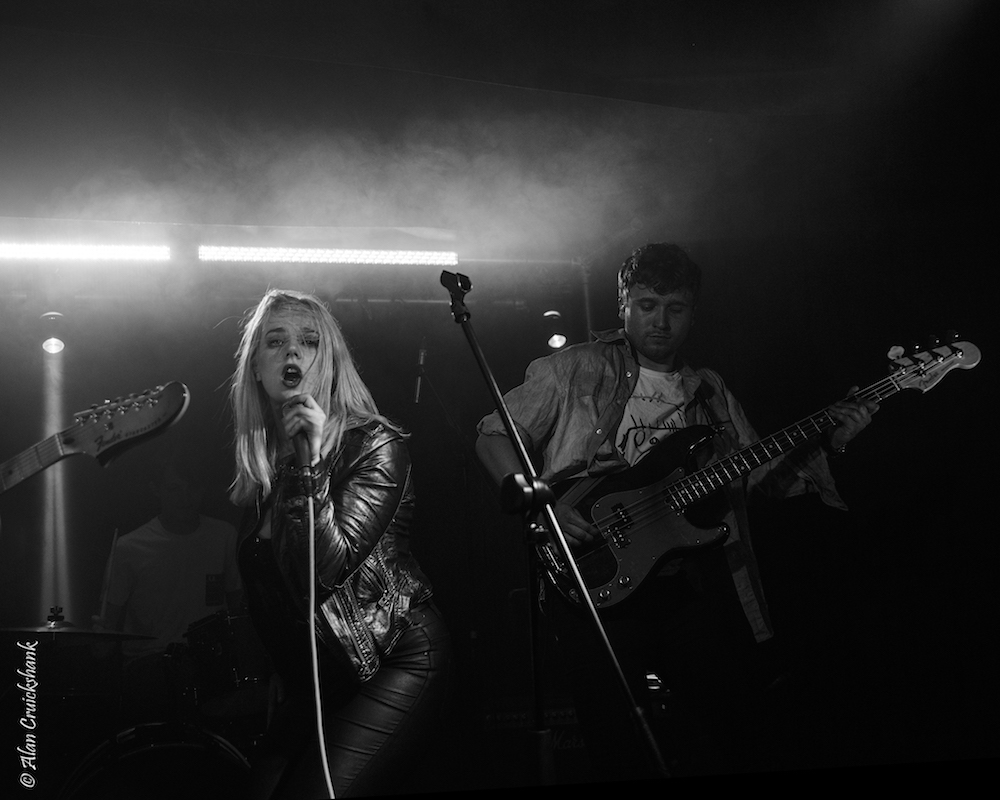 After a few light refreshments at Eden Court for the closing reception, and spot of Carma and Annie Booth, too we made our way back into town for the second night of showcases.

As with Wednesday night first port of call was The Tooth and Claw, tonight with a fan at the bar helping the air circulate. Real Life Entertainment were the draw tonight and they opened with a real grip of Stranglers’ snarl and let the guitars loose as they ripped through their set. When they drop the pace they become more gritty and brooding. They even take it in a Rolling Stones direction as the touch a lot of bases and round off their set with a cover of The Pixies’ ‘Hey’. I later found out when I caught up with the band that Rick Michalski their vocalist was unavailable and Ross McCaw covered all the vocals on the night. I was impressed when they were a man down, so it will be interesting to hear them again with their full complement.

Following on were 100 Fables, who are no strangers to Inverness or the venue. With their all action approach and their reinvigorated retro rock they set about adding to their growing set of followers. One thing that 100 Fables do is perform, and in particular, lead vocalist Lyndsey Liora who sets about seeking audience attention from the go. They have been releasing a song each Friday throughout June and there is no let up in the quality to add to the likes of ‘Psycho Girlfriend’ and ‘Wake Up’. Consistent performers with a real drive to entertain.

Down at Macgregor’s Anna Sweeney and her band had kicked off. Anna had taken time away from the music scene but has recently made a return with the release of her album “Game Face”. And it is a real game changer. Anna has dropped the acoustic guitar and gone the full Taylor Swift with an album chock full of slices of the finest pop. Tonight she proved with her band that she could translate the album into a fine live performance. The songs all sound like should already know them, but now you have you won’t forget them. You could easily slip any one of her songs onto one of the aforementioned Taylor’s albums and it would not look out of place. As comebacks go, this is one of the most impressive.

In Hootananny’s, Miracle Glass Company are conjuring a rousing performance with their bold rock ‘n’ roll. Set up to take advantage of the full width of the stage and also to not hide drummer, Andy Duncan, who plays a pivotal role as one of three vocalists, but not just individually but with three part harmonies too. This gives them that extra dimension and versatility to pull off what they do. Whether it’s a down and dirty Stones’ style number or a bit of stomping glam rock Miracle Glass Company deliver every time. This is party music, a party you know that you’re guaranteed to enjoy.

XpoNorth has been confirmed for another three years which is great news. As well as the music and the programme during the day it’s a great way to make new connections and discuss the pioneering videos of Jesse Rae…