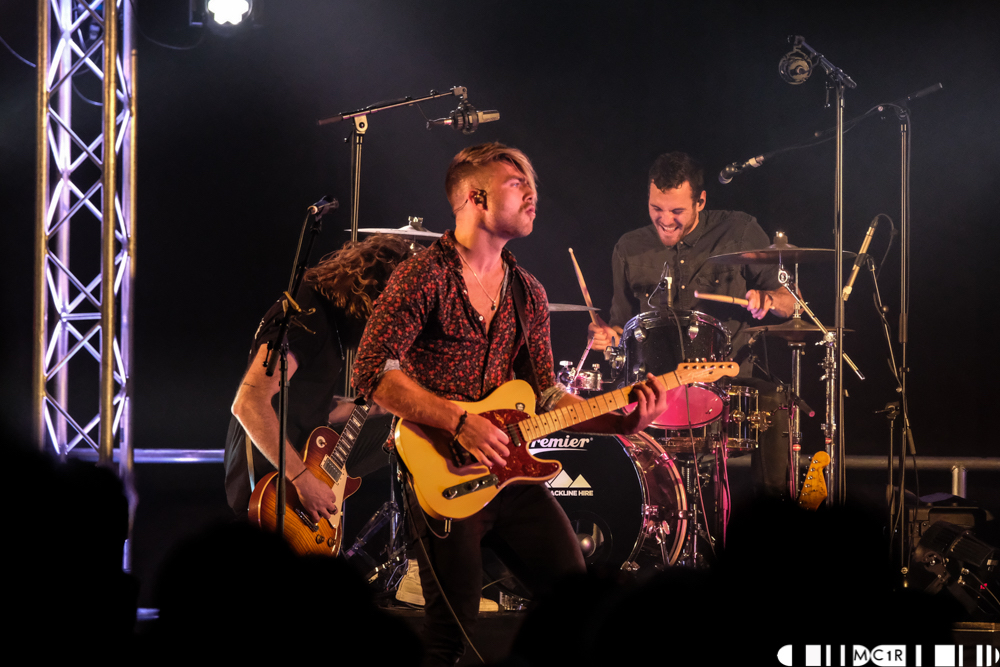 Ahead of their gig at Belladrum in August, Will Irvine of Hunter & The Bear chats to IGigs.

A busy festival season is promised for Will and Co, so we were fortunate enough to catch up with the band ahead of their return to Belladrum and their forthcoming single release ‘Electric’.

Q: When we reviewed you last year we described you as evolving into “the rockier side of rock”, do you think that’s a fair judgement?

A: I’d say so. We’ve been growing as a band and adding quite a bit of grit to our sound so that seems fair. Try keeping Jimmy’s foot away from his distortion pedal. It’s an impossible feat.

Q: How do you feel about the rock scene currently? Who would you identify as your peers as champions of Rock at the moment?

A: It’s on the up for sure. You’ve got pretty new bands like Nothing But Thieves and Royal Blood playing arenas all over the world now which has got to be a good sign, along with huge established acts headlining festivals all over the place. Look at Arctic Monkeys and Kings Of Leon.

It’s all good inspiration for us. We saw Nothing But Thieves play a show to about 100 people at a Fender event when we were down in Brighton for our Great Escape Festival slot. It kicked off in there! As far as the champions of rock go, I’ve gotta give that to the mighty Biff. Mon. The. Biff.

Q: Hunter & The Bear have both the potential and momentum to get to the very top. At what point would you be happy say you have “made it”?

A: Glad you think so. I don’t think anyone ever wakes up one day and says “Good morning world, I’ve made it now”. We’ve got massive ambitions and a long way to go. If we want to be the best band around that’s gonna take some serious hours and a great fanbase that keeps pushing us. We have super dedicated fans who always go out of their way to come see us do our thing. We’re still in the early stages of all this so lets see where the next releases and tours get us! Come back to me in a year…

Q: You have been announced as playing TRNSMT in July. How does it feel to be on the same bill as Queen and Adam Lambert?

A: It’s a huge lineup. We got onto that bill when we sold out our last Glasgow show in 4 hours. That’s the kind of thing that makes these monster festivals take note so we owe this one to the people who were at that show.

As for Queen, we actually met Brian May at a charity gig we did about 18 months ago. Shameless name drop. He came into our dressing room 5 minutes before we were due on stage and said he was a big fan of what he’d heard. Probably just a line but I think we all did a little wee in our trousers at that point. He then filmed the whole gig from the VIP area. What a tank. We will rock him.

Q: The connection with your audience , be it at live gigs or through social media, is very powerful. How does this relationship impact directly on your music?

A: There’s nothing like the feeling at a gig when the energy in the room is electric and we’re blowing the roof off. The social media stuff is great for spreading the word about what we’re up to but when people come see us live, that’s where the real connection is made.

Q: Our last memories of Belladrum 2017 (and we suspect many others) was catching you close the festival at The Seedlings stage, what are your feelings about returning to the Tartan Heart Festival?

A: That was a mad night! I remember thinking that our set time was a bit late and that it might’ve been a bit of a graveyard shift but I was proved SO wrong. You couldn’t get into the tent and the energy was amazing. We partied all night with some random people in the campsite. Can’t wait to get up there and tear the Hot House stage apart with our set on the Friday evening. It’s gonna be rowdy in there.

Hunter & The Bear plays Belladrum 2018, on Friday the 3rd of August, time to be confirmed.