Ahead of his gig at the Jammy Piece in July, Nicky Murray chats to IGigs.

The name and wooly hat on the promo for Wintermore contrasts quite nicely with the planned release of the EP. How does the title represent the tracks on the EP?

Haha, well for a start the name ‘Wintermore’ comes from a song of mine that is a few years old. I decided to record it on this EP as the closing track. The song is about the way certain old wisdom tribes used to look at the cycle of a year, and how winter was time for hibernation and contemplation. The EP is a collection of love songs (‘love’ in it’s many forms), and the track ‘Wintermore’ is an expression of romantic love. 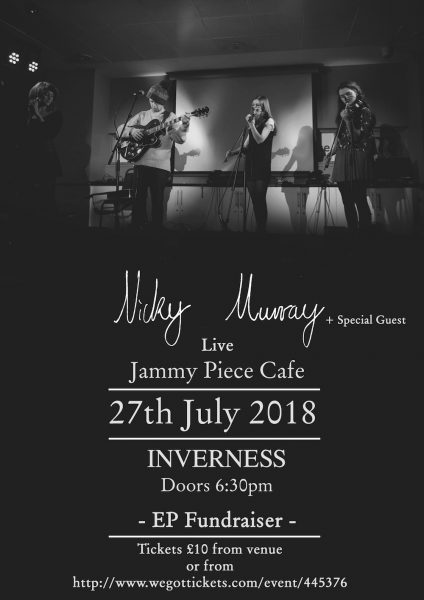 You seem reluctant to pinpoint a genre for your music but what is at the heart of the music that you create?

Echoing what I just said, I focus on expression. I don’t consciously try adhere to a specific genre, I just say what I like and play what I like. I do try to grow and learn more, I am open to learning from other artists, I will at least listen to what others have to say. I think I ‘overfeel’ rather than overthink my music, perhaps that explains all the woe in my songs haha.

Who are the other musicians that are involved in your music, and how did you get them on board?

All in, there are 6 musicians on this record. Myself on guitar and vocals and a little piano. Chloe Rodgers and Chloe Bryce both on violins. Patsy Reid on cello. Rachel Sermanni and Emma Gillespie on vocal harmonies.

Working with these girls has been a genuine honour, I really am fond of them all as humans as well as musicians. They all bring to the table something vital. I’m not sure if they themselves know this but I chose very carefully who I wanted to play my music with me. Each of them are individual virtuoso musicians, and I feel together we have created a great record (despite my efforts to challenge each of them a little). They all respect the music and its intricacies. Now I hate to sound too ‘Rock n Roll’ but that respect to me is important. Jamie Pryke was the recording engineer, Jamie is really something, give this boy a job to do and an idea and he runs with it and gives it his all. He put in wealthy shifts for this. He’s a great listener and he’s totally open and honest, great for us sensitive weirdo musicians 😊 He is the full time sound engineer for Seth Lakeman, so he knows strings well, a great engineer, and one of the nicest people you’ll come by. I feel extremely privileged to work with all these people, really.

You have been involved in other music projects in town recently (namely the Songwriting Circle and Sofar Music), how are they developing?

Sofar is going extremely well. It is about connecting the artist and the listener, all of our shows are aimed at being intimate and relaxed, and fun. We used to go to Sofar shows in Glasgow and we loved them so thought we’d bring it to Inverness, we just need more people to sign up and come to the gigs, it’s a different system to get used to, but it truly is a great thing!

Separately I run a Songwriter’s Circle every Tuesday in MacGregors (the precious poets need not worry, we stay in the backroom, clear of the bar environment). I want the circle to be a safe place for artists to come and share their original works in a session like environment, it’s not a gig, it’s not a performance, it’s just a safe space to share songs etc. People are welcome to come hang out with us and listen to the music too.

There are no rules per se, folk just share, sometimes we’ll chat about the song or the writing process, but there’s no interrogating, it’s very informal. It was Bruce’s idea originally, I enjoy working with Bruce, he cares about music you know! It’s a great platform the Songwriter’s Circle, I urge songwriters to come along, I know for a fact that the Sneck has heaps of talented dark horses!

Your forthcoming gig is a fundraiser to enable you release your EP, how difficult is it to release music in the current environment?

Yes, we are excited for this one as it’s been a while since we’ve really put on a gig. The lassies down at the Jammy Piece Café are great. Jammy Piece Jane (the owner) approached me after we put on a Sofar show there and told me that since then they have had a strong demand for more live music and wondered if I’d be interested in working with her to help the café be known for decent music. Jane was totally open as well as offering to help me, so we decided to put on the gig. She is very much interested in ‘café culture’. Good folks, good tea, watching the boats go by on the canal and enjoying live music, what else do you want?

If it wasn’t for this kind of thing, releasing music independently is super difficult. Unless you have heaps of money then affording the costs as a musician is difficult. I did a batch of pre-orders which helped for half of the overall process, but I’m still only half way there in terms of funds. I like the idea of earning this though, just being handed everything and not having to work at all doesn’t seem to feed the soul too much. However, help is sometimes needed, and the help of good people is always warmly welcomed, and we seem to be doing well so far. We’re getting there, only CD production left to tackle.

Who is supporting you on the evening and why did you choose them?

A good pal of mine Joe McGuinness (originally introduced to me by my Uncle Sticks) is my special guest for the evening, he will open up for us and warm the floor (although I am worried it’ll be too hot for us to play on afterwards). Joe is a very important songwriter in my book. He’s in his 60s now and so his physical strength for doing long gigs has been robbed. A short set is perfect for him, something he has mentioned to me several times, so I thought this would be ideal for him. I feel more people should hear his music, he is really something. It’ll be an honour to share a gig with Joe. He used to play to huge audiences in big bands several years back and so knows how to run the show with ease, you’re guaranteed a good show, that’s for sure.

Over the years I have recorded Joe, learned many of his songs, and enjoyed having good craic with him, he is an influence for me. I am fond of his family, wee H, and his granddaughter Shannon. Shannon used to sit in silence and watch Joe and I jamming when she was a shy teenager (myself being only a few years her elder). She must have thought “who’s this weird long haired young hippie wannabe jamming with my Granda, he’s closer to my age, why is he hanging about with my Granda?” haha! And so eventually I’ve ended up playing music with her more these days.

She is a good musician, a gentle fiddler, and a sweet singer, I see her as important and I like her approach to music, she is a very good observer of any art, so I enjoy having Shannon in our string section when I can and as a close pal also. She’s played several gigs with us and festivals, including Tiree Fest as of last week, so we’ve been practicing 😊 On the night I’ll have Chloe Rodgers and Shannon on violins accompanying my songs.

So to answer your question again, these guys are my support, as well as the café, the musicians, friends, and fans of my music, and importantly good folks like yourselves Chris ! I see us all as a wee community, it’s totally great. Thank you!

Nicky Murray plays the Jammy Piece, Inverness on the 27th of July.

Tickets on Sale from this link